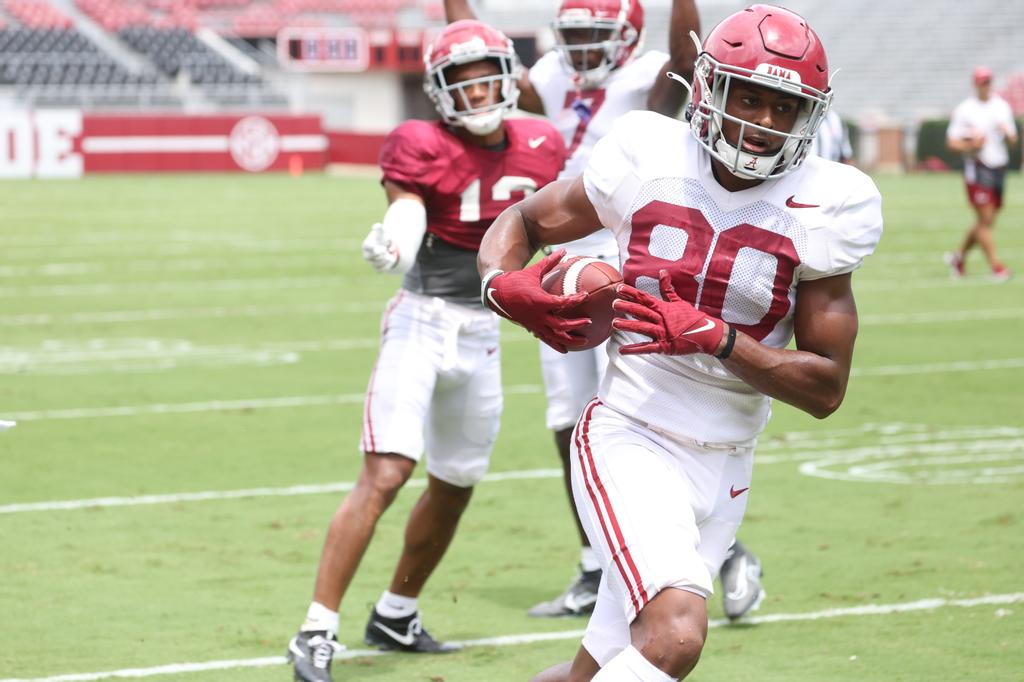 Kobe Prentice has been named one of three starting receivers for Alabama ahead of this year's season opener against Utah State Saturday at 6:30 p.m. inside Bryant-Denny Stadium. (Photo by Kent Gidley/Alabama Athletics)

TUSCALOOSA – When Nick Saban was recruiting former Calera wide receiver Kobe Prentice, he did so with the premise that Prentice could be the team’s “secret weapon.”

Well, the secret is no out after an impressive summer for Prentice, who was listed as one of three starting receivers for the Alabama Crimson Tide ahead of the team’s season opener against Utah State on Saturday, Sept. 3.

His quick rise to the top of the depth chart is something that returning starting quarterback and Heisman winner Bryce Young has taken note of in their short time together.

“Yeah he’s had great energy since the moment he stepped foot here on campus,” Young said during a press conference on Aug. 29 “He’s someone that wants to work, wants to get after it, always wants to be coached. He’s just worked hard. He’s been able to make plays for us in practices and scrimmages, and he’s obviously worked his way up the depth chart, and really, I think it’s just that willingness to work. He comes in every day with a super great attitude, great mindset, he’s always energetic. He’s easy for everyone to work with and bounce off of. So just his willingness to work and obviously the talent and athleticism he brings to the field.”

During his time at Calera, Prentice became a standout receiver because of his speed and agility. As a junior, he totaled 711 yards and nine touchdowns on 41 receptions, but during his senior season, he entered as one of the fastest athletes in the state and went on to total 1,231 yards and 18 touchdowns despite most teams double teaming him throughout the year.

It was that potential that Saban and the Alabama coaching staff saw in him, and just after he committed to Maryland, Saban called him a day later with the offer.

Sitting inside Calera’s Las Mesas eating dinner with friends, it was that moment that changed everything for Prentice, who had always dreamed of playing for Alabama.

“I went outside and screamed,” Prentice said during his signing ceremony. “I was real happy. It was a moment to remember. I’ve been dreaming of this since I was a kid.”

Now, he has quickly made an impact on the coaching staff and his teammates with the same athleticism and work ethic shown at Calera.

That was evident recently with how he performed in the team’s final scrimmage of the season.

“He has shown promise with his quickness playing in the slot,” Saban said a week ago. “His opportunities have increased since JoJo (Earle) got hurt. He has taken advantage of it and played fairly well. I still think he has a ways to go in terms of knowledge of the offense and doing things exactly like we would like him to do it, but he has a great work ethic, he works hard every day, he has a great attitude, he’s really positive and upbeat and worried about what he’s doing. He doesn’t get frustrated easily and I think all of those things are helping with his development.”

Saban doubled down this week during his game-week press conference, saying how important it is for those scrimmages to help determine who will be successful on the field when asked about Prentice and other players stepping into starting roles.

He added that no one is entitled to anything on the team and that each person earns their spot by working hard and challenging themselves to be the best version of themselves on a daily basis.

According to Saban, many of those qualities have been shown by Prentice.

Now, when Alabama takes on Utah State in the opener Saturday at 6:30 p.m. inside Bryant-Denny stadium, Prentice will walk onto the field living his dream with the opportunity of a lifetime.