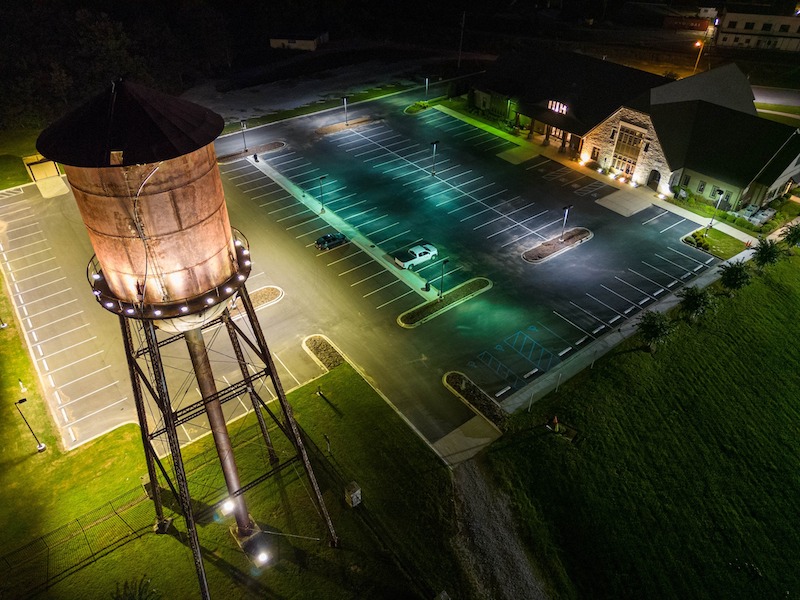 New and improved lighting was installed at the historic Siluria mill water tower next to the Alabaster City Hall this past week. The new system allows the ability to flash different combinations of colors which will be used to highlight various occasions and events. (Contributed)

ALABASTER – The city of Alabaster has entered into an agreement with an architecture firm to design a new amphitheater and stage near the city’s water tower.

“We have been talking about the possibility of a venue like this for years, and as an Arts Council member, I was following it before being elected to office,” Councilman for Ward 5 Jamie Cole said.

Cole has been instrumental in spearheading the project.

“Now that we have gotten back to a time where live events are more feasible, it made sense to revisit some of those ideas and improve on them,” Cole said.

The Council voted during its meeting on Monday, Aug. 22 to enter into an agreement with Turner Batson, not to exceed $200,000 for the design of the amphitheater in what is now referred to as the “municipal green” located near City Hall and the Alabaster Senior Center.

The plan for the space is to create an area with tiered seating levels, a stage with rigging for lighting/equipment, a loading/unloading area and a green room for performers. There will also be a small addition to the Senior Center to allow for more general-purpose meeting/event space.

“The plan is to create an event space to fill a void we have in this city now, for smaller functions that would now require portable staging from a logistics standpoint,” Cole said. “From a creative standpoint, it gives us more possibilities to host events that our residents have to leave home for now. We are also cognizant of making sure we create a venue that fits the space and provides the most options for use while preserving the feel of a greenspace.”

The expansion of facilities in the water tower area will also include new meeting space and restrooms that will serve the amphitheater.

While there is no deadline for the project to be completed, it has been included in the council’s budget for 2023.

Cole envisions the space being utilized for future events such as Jazz in the Park, Alabaster Jubilee, the water tower lighting and more.

“It is all about expanding creative opportunities for our residents,” he said.