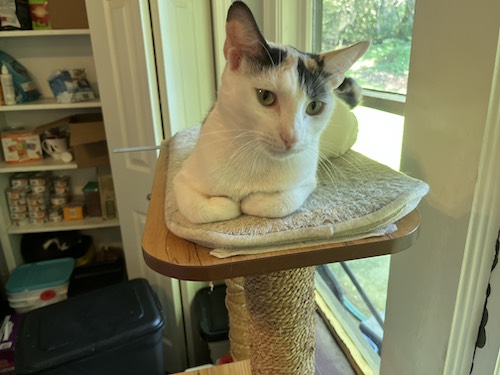 PELHAM– Kitty Cat Haven is a rescue and adoption center located in Hoover that is partnering with the Pelham Pet Supplies “Plus” to hold adoption events every Saturday throughout the month of September.

Kitty Kat Haven and Rescue has been located in Hoover on Columbiana Road since 2016.

“We wanted something where we could have a facility,” Bowman said. “We wanted a house. This first time I walked in here I was like, “This is it.” Because, the windows and everything here is what the cats need. We have everything set up for the cats.”

Bowman said the comfort of the cats in the facility is of the utmost importance.

“What we wanted to do is make it just like a house for the cats so that they don’t feel they’re in a cage. We are cage free.” Bowman said.

“No one gets a salary. We are all volunteers, even myself,” Bowman said. “Everything that we would have put into salaries, we take that and we put it back into what we’re doing here.”

A screened-in patio which housed many cats was a focal point of the facility.

“This is exciting here. This is what we call a cat-io. They love it out here,” Bowman said. “They can come in twenty-four hours a day, in and out. We have a tunnel right there where they can go into the kitchen area.”

Bowman said that Kitty Kat Haven is a passion project both for herself and everyone else involved in the facility and also how rare it is to see a haven and rescue facility just for cats.

“I realized there is hardly any rescues just for cats. We have a lot of dog rescues, but not a whole lot of cats,” Bowman said. “That is why I decided to just do cats.”

Kitty Kat Haven will hold an adoption event at the Pet Supplies “Plus” in Pelham, which Bowman expressed excitement for.

“We did our very first adoption event in Pet Supplies “Plus” and we got six kittens adopted just like that,” Bowman said. “Now we have it down for every Saturday in the month of September from 12 o’clock to four.” Bowman said.

Kim Tyler, the foster care coordinator, said she is happy about the positive response the events at Pet Supplies “Plus” have garnered.

“They have been wonderful to work with,” Tyler said.

Bowman said she agrees with how wonderful the experience has been at Pet Supplies “Plus.”

“They just opened their arms for us,” Bowman said.

Bowman has been happy with the successful rate of adoption that has occurred since their original opening in 2016.

“Since we opened in October of 2016, we have adopted out right at 4,500 cats and kittens. Right now in our facility and in foster care, we have more cats and kittens than any shelter in Alabama. We have a wonderful foster network,” Bowman said.

Bowman said that whether the cats are adopted or not, the haven is there for any cat to call home.

“This is the haven. We work hard to get it this way. We have about 52 cats at any given time here,” Bowman said.

According to Kitty Kat Haven and Rescue, the partnership with Pet Supplies “Plus” has been exciting. With the distance between the two businesses being four miles, Bowman said the collaboration has been perfect.

Bowman said she is prepared for the event each Saturday and estimates that there will be 25 kittens will be up for adoption.

The Pet Supplies “Plus” adoption event will occur on Saturday, Sept. 3 from noon until 4 p.m. at 1928 Montgomery Hwy, and the adoption events will continue to be held throughout the month of September.

More information on the Kitty Kat Haven and Rescue can be found online at Kittykathavenandrescue.org.