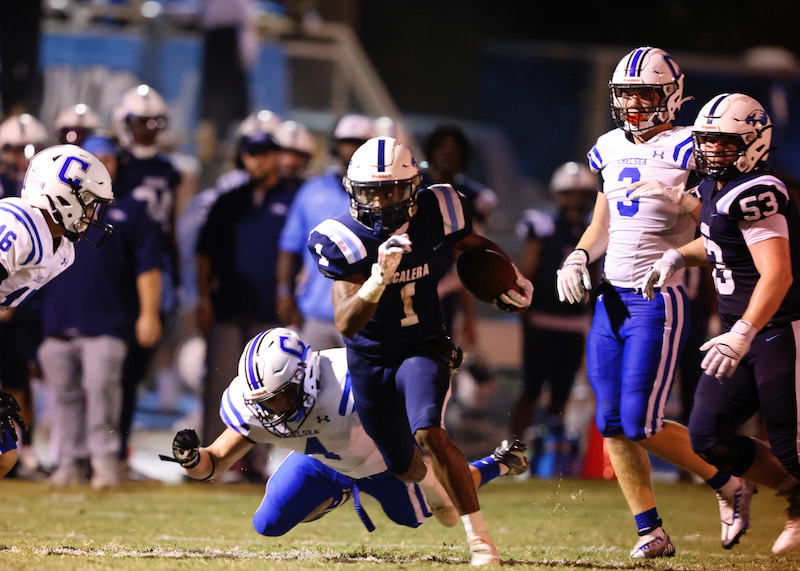 ALEXANDER CITY – In a defensive battle between Calera and Benjamin Russell was intense for the third week of the season, however, one offense created some early separation for their defense to work with.

The Wildcats jumped out to a 13-0 lead at the half, as Calera’s offense struggled for the third week in a row.

Benjamin Russell eventually extended that lead to 23-0 in the second half, which Calera couldn’t overcome despite a late push, leading to a 23-6 loss.

“We always want a shutout, but more importantly we got the win,” Benjamin Russel head coach, Smitty Grider said. “This feels great. I could not be happier, this is nothing short of amazing.”

To start 3-0 in his first season at the Helm, Grider described his main goal to restore the tradition of winning at Benjamin Russell. As of week three of the season, Grider appears to be keeping his word.

“We are bringing Wildcat pride back,” Grider said.

As is almost tradition for the Wildcats, Malcolm Simmons and Corri Milliner both found the end zone in the first half.

Milliner started the scoring off for the home team with a quick slant over the middle. Entering the night, Milliner was third in the state in touchdown receptions and total receiving yards.

Simmons found his score in a much more difficult manner, as the junior had to run well over 100 yards total to find pay dirt.

Taking the ball up the left side, Simmons lowered his shoulder up and through a would-be defender. The contact slowed him down, but he was able to make a quick cut right and got free across the middle of the field.

Simmons scored on the far-right side of the end zone, completely opposite of where he started.

“We got guys like Malcolm Simmons and Corri Milliner that just make plays all over the field,” Grider said.

A blocked PAT and a missed field goal had the score only at 13-0 at the half, but the damage had been done.

Calera had only scored 20 points all season coming into the contest, and Benjamin Russell was able to stifle the Eagles’ anemic offense.

Opening the third quarter, senior Bryan Simmons forced a fumble on Calera’s quarterback that resulted in a field goal.

The only time Calera mustered any offense was on its final drive of the game, eventually scoring a touchdown, but ultimately missing on the 2-point conversion.

The Calera Eagles hit the road Friday, Sept 9. to take on Homewood.