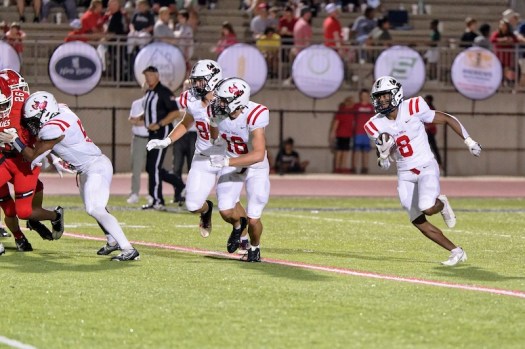 Oak Mountain couldn’t overcome a big first half from Hewitt-Trussville in a 48-14 loss to open region play on Friday, Sept. 2. (For the Reporter/Barry Clemmons) 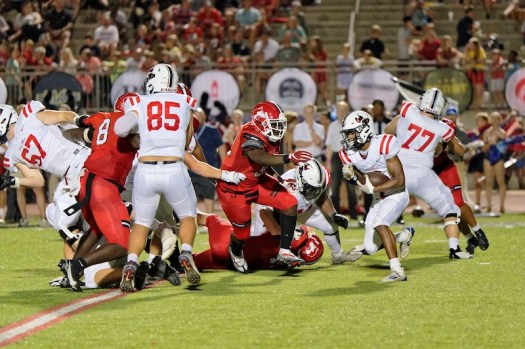 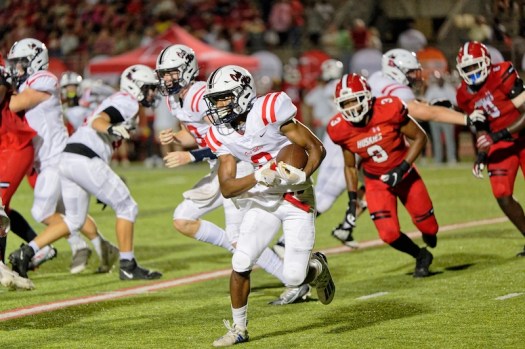 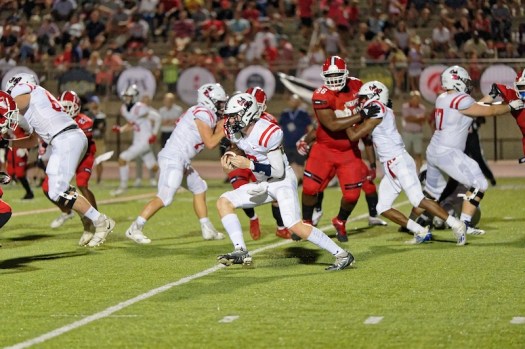 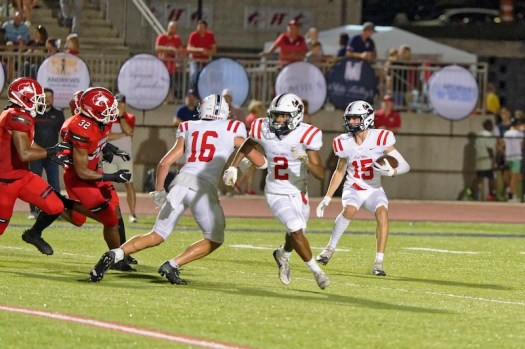 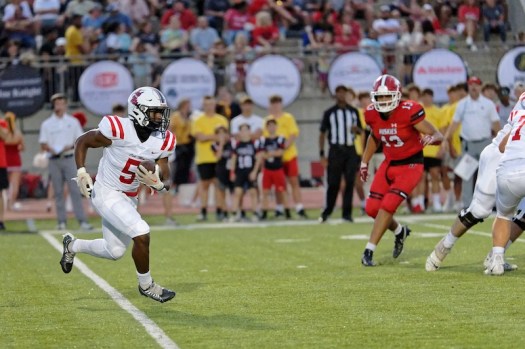 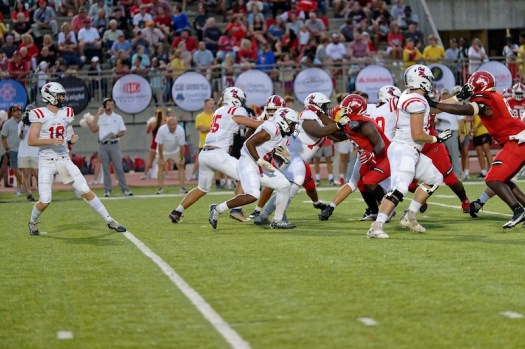 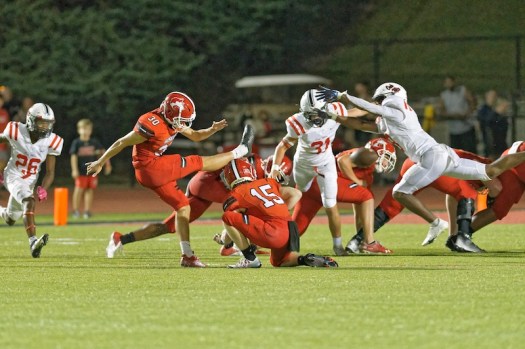 TRUSSVILLE – Struggles to move the ball offensively and stop Hewitt-Trussville in the first half of a region opener on Friday night, Sept. 2, became costly for the Oak Mountain Eagles.

Taking on the Huskies on the road, Oak Mountain fell behind 14-0 in the opening quarter, but the Eagles ultimately got a flash of hope early when Devan Moss returned a kickoff 99 yards to the house to make it 14-7 with three minutes left in the quarter.

From there, however, the Huskies reeled off 27 unanswered points the rest of the half to take a 41-7 lead and create all the necessary separation in a 48-14 victory.

“I think the biggest thing is, you know, talking to our kids, is understanding that we have to prepare every day like it’s a ball game and I don’t think that we have done that the last couple of weeks and I hope that we use this as a wake-up call to get us going,” Oak Mountain coach Tyler Crane said.

Hewitt-Trussville opened the game strong with a touchdown catch by Kadarius Barnes, however, the scoring started coming quick and fast eight minutes into the game when Huskies quarterback Peyton Floyd scored on a 37-yard run on just the second play of the drive.

The ensuing kickoff is when Moss scored the only points of the Eagles’ first half with his kickoff return.

Hewitt-Trussville responded with a 59-yard pass to Barnes which set up Floyd’s second touchdown run of the night.

The Huskies scored on all three of their second quarter drives as Floyd added his third rushing touchdown of the half, Brett Mosely caught a 70-yard touchdown pass, and Kennedy Mitchell beat a tackle on the left sideline to score from 39 yards out and send the Huskies to the half with a 41-7 lead.

Aside from the Eagles’ drive that ended the half, every Oak Mountain drive in the first half ended with a punt, which meant the touchdown run from Davion Foster just 1:16 into the third was a welcome sight.

However, at the start of the fourth quarter, Floyd scored his fourth rushing touchdown of the night to increase the Huskies’ lead to 48-14, which would be the final score after both offenses couldn’t find a rhythm in the second half.

After the game, coach Crane declared that Eagles fans would never have to worry about an Oak Mountain team not being ready to play again.

“You know, I challenged the guys at halftime to play with some heart,” coach Crane said. “I don’t think we did in the first half, I think we were not ready to play and that’s on me, I take full responsibility for that. But I challenged them in the second half to go out and play and I’m fairly sure the game was 7-7 that half, and honestly, I am in no shape, form or fashion about moral victories, but it was something to build on and I hope that it woke our guys up to understand that we got a long way to go and we can’t walk into anything and be successful.”

Foster led Oak Mountain’s offense with 56 rushing yards and a touchdown on eight carries, while Will O’Dell finished with 38 rushing yards and 57 passing yards. Trey Vassell was limited to 17 yards on nine carries after back-to-back 100-plus yard games to start the season.

Moss led the defense with eight tackles in the victory, while Drowdy Hackbarth totaled seven tackles.