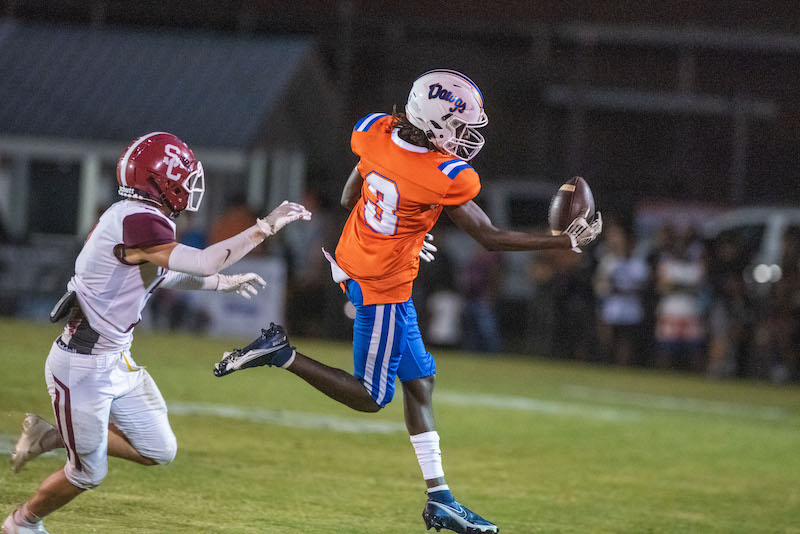 The Montevallo Bulldogs will have a couple of key players to replace this season, but they should continue to take steps forward in year three under Blake Boren. (File)

MONTEVALLO – Montevallo opened region play with a 33-18 win over Hale County on Friday.

The Bulldogs were led by a three-headed monster offensively with Braxton King, Anthony Martin, and Javon Rogers all eclipsing the 100-yard mark in passing, rushing, and receiving, respectively.

However, Hale County got on the scoreboard first on an 84-yard pass from Antwain Zinnerman to Jay Brown just a couple of minutes into the game, and it was 6-0 at the end of the first quarter.

Montevallo Coach Blake Boren said it was difficult to prepare for the Wildcats (1-2 overall, 0-1 in Class 4A, Region 3) because of Hale County Coach Ryan Locke’s experience at the college level and an offensive system that utilizes a multitude of formations and shifts.

But after the long touchdown play, the MHS defense shined.

“Our defensive staff did an unbelievable job, and our kids were really locked in on what we needed to do,” Boren said.

With the defense holding the visitors in check, the Montevallo offense went to work.

First, it was Martin for a 4-yard touchdown run with 5:26 on the clock in the second quarter, and then King passed to Rogers for a score from 53 yards out.

Benjamin Locks was good on both extra points for a 14-7 lead, and then the ‘Dogs made it 20-6 before halftime on an 11-yard pass from King to Jaydien Rutledge with just 26 seconds on the clock.

Hale County pulled to within one score of the lead early in the third quarter, but Montevallo (1-1, 1-0) answered right back with a 57-yard touchdown pass from King to Christian Tolbert. Locks was good on the point-after to make it 27-12.

“I was really proud of Braxton King,” Boren said. “Our quarterback play tonight was as good as it’s been in the three years I’ve been here.”

Elfreeman Morton scored the last touchdown of the night for the hosts with a 7-yard run with 1:23 remaining in the third quarter.

Hale County added a touchdown with about 5 minutes to go in the fourth quarter.

King completed 11 passes in 15 attempts for 220 yards and three touchdowns.

Rogers caught seven passes for 128 yards and a touchdown, and both Tolbert (1 reception for 57 yards) and Rutledge (three receptions for 35 yards) also had touchdown catches.

Boren said he was pleased with the offensive balance for the Bulldogs, as they rushed for 168 yards and passed for 220 yards.

“That’s something we’ve really worked hard on in my time here,” he said. “Tonight, from the time the ball was put in play, we set the tone.”

Montevallo next hosts Dallas County in another region tilt on Friday, Sept. 9.