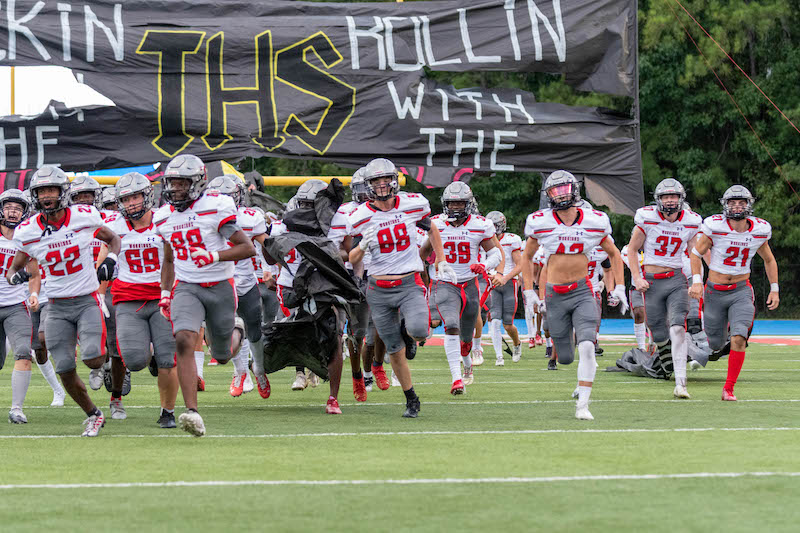 High school football, there is literally nothing more American. The local drugstore with signs in the windows saying “we love INSERT SCHOOL NAME AND MASCOT HERE!” (yes, I did mean to write that), people walking down the road leading to the football field, trucks with school colors spilled everywhere, and the local town radio and television stations commenting on the beloved high school team’s latest game.

This is nothing new to me. Although I grew up on the outskirts of a large metropolitan city with pro teams, the suburbs where I lived were filled with high school teams and the fans that supported them. The players practiced football on grass, not astroturf, and the whole town came out for their games. It seemed that new football uniforms took precedence in the school budget over new textbooks. I wonder how we can still think about this as just high school football when all these teams are getting the college program treatment.

I get it, I am new to the area. What do I know? Well, what I’ve seen in my short time writing and watching all these teams play is that viewing it as just a high school team is like saying Alabama is just fond of football, an understatement. While there are many aspects of traditional high football still alive, it has become football for the modern age.

It is not just the players who are getting the collegiate-level treatment. Schools don’t have coaches whose careers span the course of decades at the same school the way they once did.. This can be beneficial in many ways. The high school I attended thought it was great having a football coach who had been with the program for almost five decades, and that would have been great if he had continued to win games and inspire players. Instead of dealing with the situation properly, they let his poor team management go on for years, and they fired him before his 50th season. Bringing in new coaches can allow programs to grow when things have gotten stagnant. Good players, plus a good coaching staff, equals a successful program.

Treating high school coaches like college coaches is one of my favorite things about being here. You have a school with the desire to revamp its programs, to be the best in the state, to be one of the best in the nation! I am not saying to fire a coach after one bad season, but don’t let it go on for years and destroy a high school football program. Hold their feet to the fire the way the college programs do.

Football helps create so many opportunities for student-athletes to go on and play at a college level or even go pro. This also goes beyond the football programs too. We will probably see the same trend for volleyball. basketball, baseball, and softball programs as well. Soccer, track and field, won’t be too far behind. High school sports have ventured into a  modern age, benefitting the players and the fans who love them.