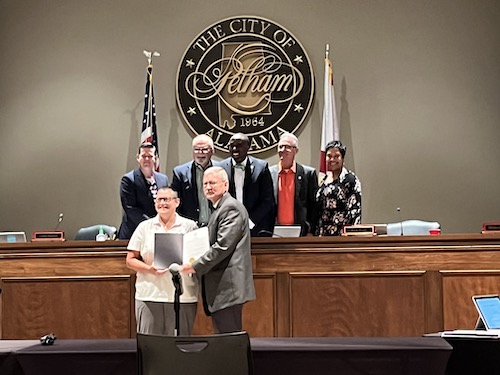 A city council meeting was held on Tuesday, Sept. 6 in which the month of September was declared “State of Teel” to remember those lost to GYN cancers as well as those who are survivors (Reporter Photo/Lizzie Bowen)

PELHAM – Mayor of Pelham Gary Waters was present at a City Council hearing on Tuesday, Sept. 6 to declare the month of September as “State of Teal” for gynecological cancer survivors and victims. The month is called in action to bring awareness to GYN cancers, acknowledge survivors and to remember the lives lost.

“It is crucial that all women learn the risk factors of these cancers so that any occurrence of these cancers can be caught in their curable phases,” Waters said. “I proclaim September 2022 as gynecological awareness cancer month.”

The announcement was met with applause.

Kathy Moore is an ovarian cancer survivor who spoke at the hearing.

Moore announced that a 5k race will be held at the Hoover preserve which will raise money for families and victims of GYN cancers.

More information can be found at Thinkoflaura.org or through Pelhamalabama.gov.