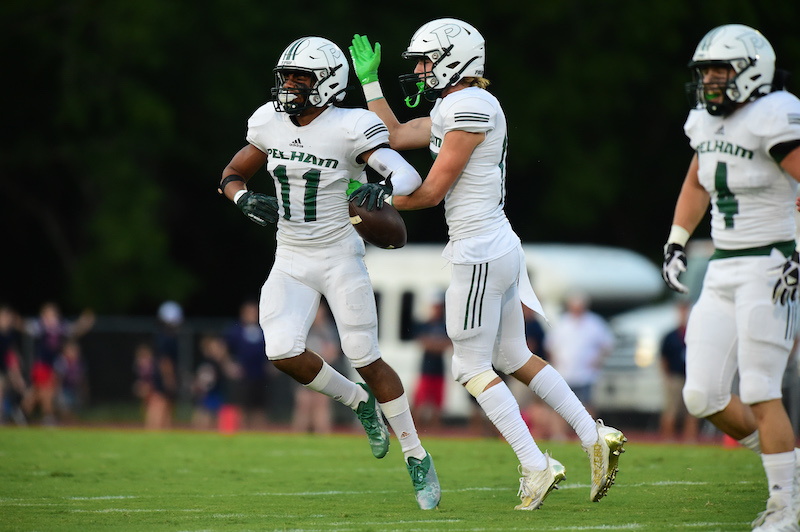 With one week of region play in the books, the 2022 season is now in full swing and heading into its fourth week.

Last week, some bounced back, some had their first blemish of the season and others continued to flourish.

Regardless, now each team knows what to expect with multiple games behind them, and we’re starting to see things take shape and the potential that lies ahead.

This week, like every week so far this season, will be another exciting one across the county. Following 12 games last week, we have a week full of county battles this week with six county teams playing against one another, including all four local 7A teams.

Beyond that, others will look to make statements during the second week of region play with some regions proving to difficult already. 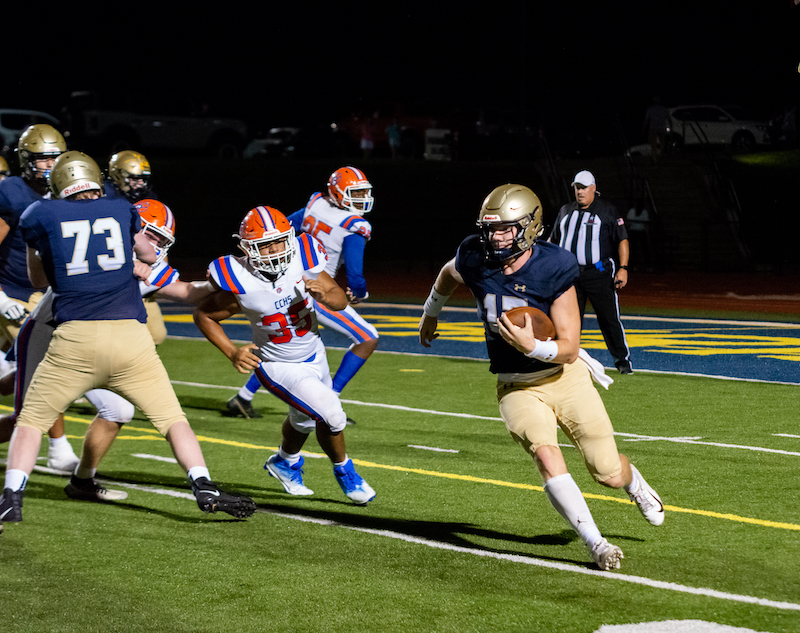 Pelham vs. Briarwood (Game of the Week, Thursday)

If we have learned one thing through the first week of region play and the first three weeks of the season, it’s that Class 6A, Region 3 is going to be one of the most difficult to claim a region championship out of, which makes this battle between Pelham and Briarwood the easy choice for Game of the Week.

Fresh off a bye week, this new region rivalry between the county foes will be the first region game of the season for Pelham following a bye week last Friday. During the time since the Panthers last played, however, Briarwood has only won two games in a row on the final drive to gain confidence.

The Lions beat Spain Park 23-21 two weeks ago on an untimed play, while they came back and beat Chilton County 36-29 last week in the final 10 seconds. Now, they’re a confident group, but they’ll go up against a Pelham defense playing well and fresh.

The Panthers lost 14-10 to Jackson-Olin to open the season and 21-17 to Oak Mountain in their last outing. The defense shined in both games, while the offense showed some promise but missed on opportunities.

So far this season, consistently speaking, Pelham’s defense has kept the Panthers in tight games, while Briarwood’s offense has been slow and then hit the go button when needed. Just based on that, you get the feel of another thrilling showdown with two physical teams, but that also makes you think there could be some late magic left in the tank for a confident Briarwood team late again in this one. If Pelham’s offense can capitalize, expect it to be tight down to the wire, but the Lions have come up clutch lately and it’s tough to go against that. Briarwood 28, Pelham 17

Thompson got exactly what it needed last week in a 34-14 bounce-back victory against Spain Park following two losses to top-50 teams to start the season. Spain Park, however, has shown drastic improvement on defense this season, which is keeping the Jags in every game. It led to an opening win against Calera, gave them a strong chance against Briarwood two weeks ago and gave them chances against Hoover last week. The offense, however, is still trying to find that extra gear. Full of potential and leaders, the Jags are hoping this is the week they can score more after being held to 21 or less the first three weeks. Doing so against this Thompson defense, however, will be a tall task. Don’t be surprised by a low-scoring game for a while, but ultimately, Thompson’s offense has started showing progression paired with its dominant defense, which should make the difference. Thompson 28, Spain Park 7

For the seventh year in a row, this 280-area rivalry returns and with region implications this time around. Chelsea enters the game 0-3 but off an impressive performance against Tuscaloosa County, while Oak Mountain enters 2-1 off its first loss of the season in a 48-14 game against Hewitt. The Eagles do lead this series 9-1 all-time, but that will mean nothing when the two meet in a rivalry showdown Friday night. Chelsea struggled to find any offense the first two weeks of the season before busting onto the scene with 41 in their first 7A game last week, and now, they’ve got confidence, whereas Oak Mountain has been led by its defense but just gave up 41. This game has the potential to be one of the most thrilling of the week because of the caliber of defense each has and two offenses that are likely going to be built around running the ball. Oak Mountain does have slightly more experience and is at home, which are the two big differences heading into the game. Oak Mountain 31, Chelsea 24

This game has quickly become huge for both parties. Calera is looking to avoid a 0-2 start to region play following a physical 23-6 loss to Benjamin Russell, while Homewood looks to remain as one of the top teams in the region after a big fourth quarter a week ago propelled them to a 24-15 win against Helena. Calera’s defense has been stellar all season, but last week, we saw what can happen against another physical and impressive defense when the Eagles struggle to move the ball. Now, they’ll get a Homewood team that was able to hone in on a more one-dimensional Helena offense last week en route to that nine-point win. Calera has the defense to keep this game entertaining, but unless the offense can find a way to score more than 10 points for the first time this season, and more than likely 20, then Homewood should walk away with the victory. Calera 14, Homewood 24

Just like the previous game we just talked about, this is another big Class 6A, Region 3 showdown. With both of these teams leading at some point late last week before ultimately losing to fall to 0-1 in region play, they surely feel like they have a lot to prove this week. Helena entered the season as a contender for the region title and looked the part the first two weeks of the season and even in the third quarter last week before giving up nine unanswered to Homewood in the fourth quarter. Chilton County, however, went toe-to-toe with Briarwood a week ago and took the lead with a minute left before ultimately falling in the final 10 seconds. Even with that loss, it’s a confidence boost for a Chilton County team that looks the best it has in a while. As for Helena, it’s all about bouncing back and gaining that confidence that you’re still the team to beat. The Huskies have to find a way to add more dimension to the offense. The run game was still successful last week, but the Huskies were missing that extra step on offense that could take them to a new level. One thing is for sure, the defense and run game can win most games, including this one, but mistakes can’t be made. That’s what became costly a week ago in the final quarter, and if the Huskies aren’t careful, it will get them on the road in this one. Helena 28, Chilton County 24

Last week’s 34-13 loss to Holtville showed us what happens if Shelby County’s defense starts slow. The Wildcats ultimately ended up playing a strong game, but a 28-0 deficit became too much to overcome. They fought back to make it 28-13, but they ended up falling 34-13 to fall to 2-1 on the season. The good to take away is that your offense never backed down, while the defense was able to bounce back. This week, taking on Jemison, the defense just needs to have a little better start, and the offense will need to protect the football to establish a physical game plan. Jemison currently sits at 1-2 on the season, but the offense has scored 14 or less the last two weeks in a row. Shelby County’s defense should bounce back this week, and if the offense can get back to 14 or more this week, they should walk away with the win. Shelby County 24, Jemison 10

Montevallo did exactly what it needed to in last week’s 33-18 win against Hale County. Looking to bounce back from a 21-6 loss to Shelby County to open the season, the Bulldogs made adjustments and looked much better on both sides of the ball. Now, they get a Dallas County team sitting at 0-2 with losses of 28-6 and 17-0. Both sides of the ball still have work to do, but Montevallo has plenty of potential and another week to help that potential grow ahead of a matchup the Bulldogs should win regardless. With Dallas County averaging three points per game right now, expect the Bulldogs to make a statement on defense this week. Montevallo 34, Dallas County 8

The last local AHSAA team undefeated this season is Vincent. Now 3-0, the Yellow Jackets have been dominant in their first 3-0 start since 2001, winning 65-0 last week against Central-Coosa, 56-0 the week before against Winterboro and 41-26 in the opener against Ragland. This may be their toughest test so far, but that said, it’s coming against a 0-2 Fayetteville team that has lost 50-18 and 47-12. Vincent’s defense is playing unreal right now and the offense continues to showcase the returning talent it has. The only obstacle that could get in the way of the Jackets this week is looking ahead to a big showdown with B.B. Comer looming a week later. Keep the attention on this one, and it should be another stellar showing and a 4-0 start. Vincent 42, Fayetteville 12

Offensive struggles have plagued Coosa Valley early in the season. The Rebels have yet to score more than six points and have been shutout twice in losses of 21-0, 16-6 and 4-0. Now, they get a Lakeside team that is 1-2 on the season and also struggling. That said, Lakeside has a 50-7 win against Southern Prep and has scored at least 12 points in every game. Coosa Valley’s defense should give the Rebels chances and may not allow a point, but we have to see the offense prove they have what it takes to score enough points to win. Coosa Valley 13, Lakeside 20

It is still early in the season, but head coach Tim Smith looks to have one of his best Evangel teams to date this season, which says a lot. The Lightning are off and rolling to a 4-0 start and have scored 47-plus in every win and given up 13 points combined with three straight shutouts. Now, they take on what is typically a powerhouse in the Tennessee Heat this week, but the Heat are sitting at 2-2 this season and have scored 40 or less in every game. That said, the two losses are both by one point and it will still provide a challenging game. Evangel, however, won last year’s game 63-7 and looks even better this season. As long as the Lightning remained focused ahead of an important stretch, they should take care of business. Evangel 49, Tennessee Heat 15