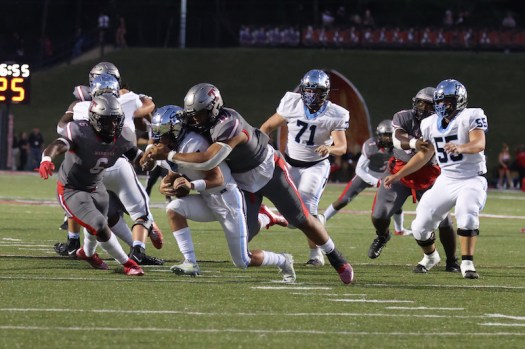 The Thompson Warriors pulled away from Spain Park on Thursday, Sept. 8, picking up a 35-14 victory to improve to 2-0 in region play and 2-2 overall this season. (For the Reporter/Jason Homan) 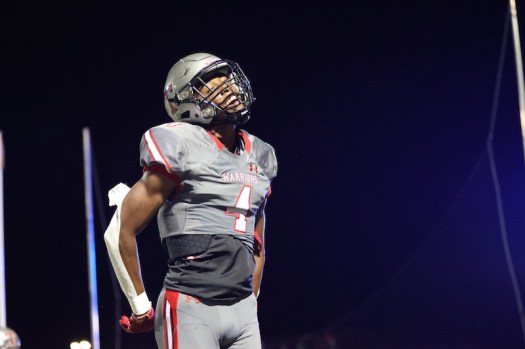 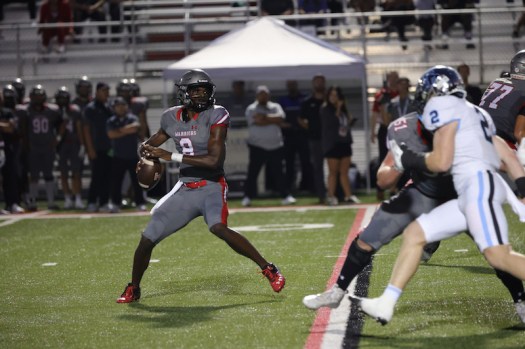 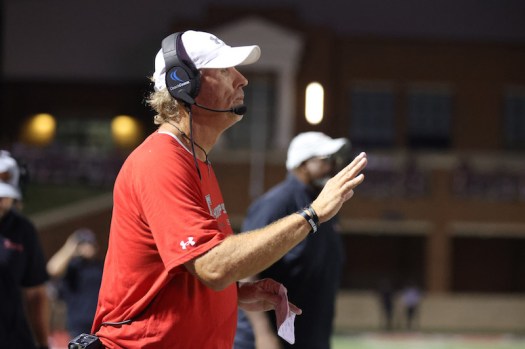 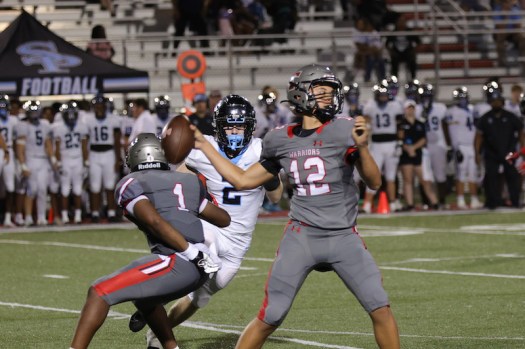 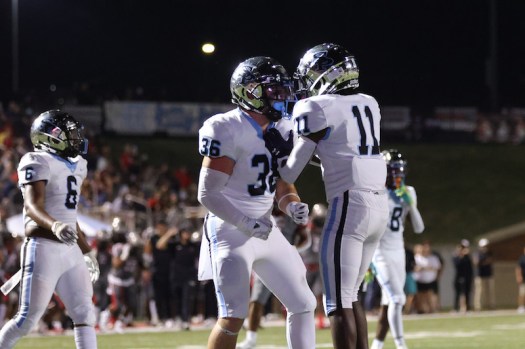 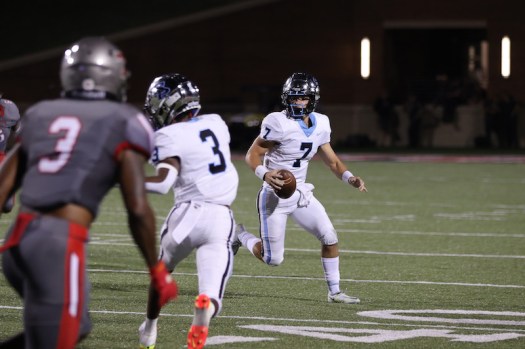 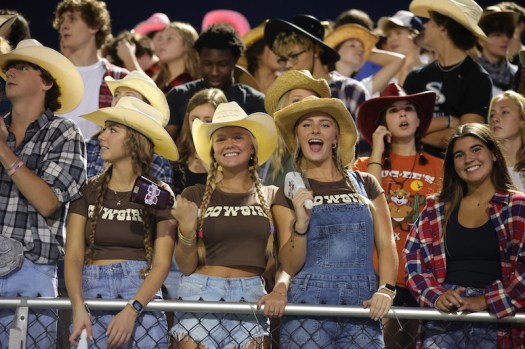 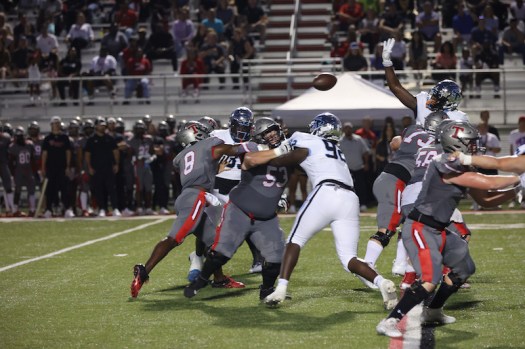 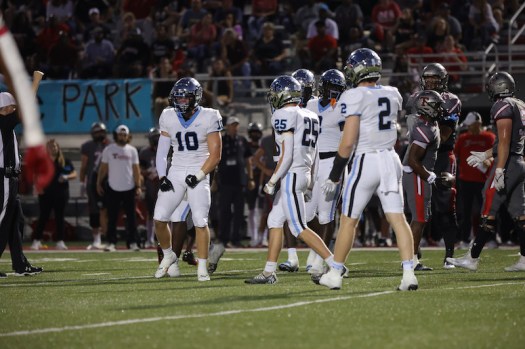 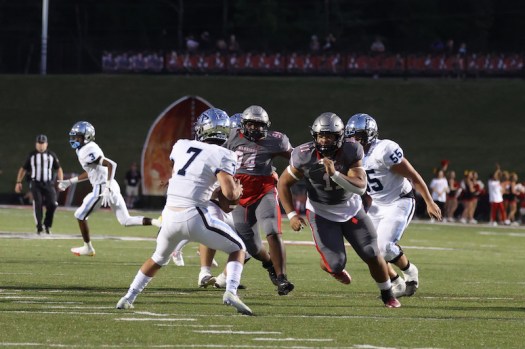 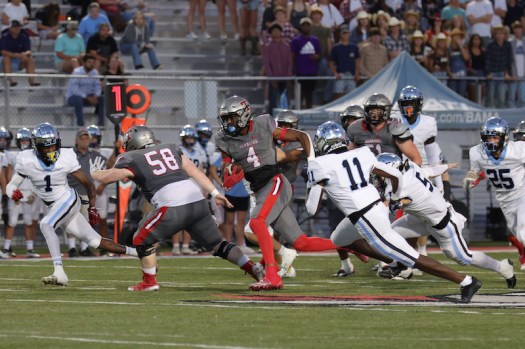 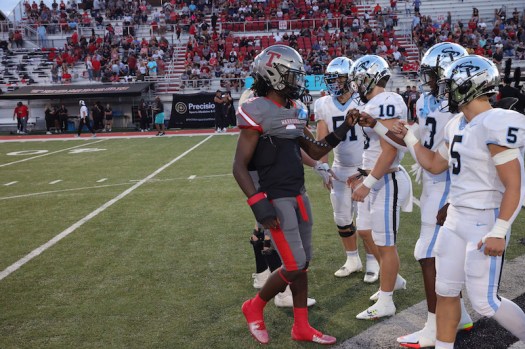 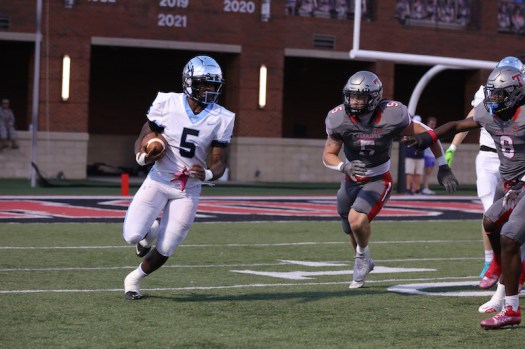 ALABASTER – A second straight region game again produced some tense first-half moments for the Thompson Warriors, but a stiff defense and an ever-evolving offense helped them continue their winning ways by downing Spain Park 35-14 on Thursday, Sept. 8 for their second win in a row.

Junior quarterback Zach Sims had the best game of his short career last week and began the game in similar fashion this week.

He used his arms and legs on a quick five-play drive that went 73 yards to kick off the game. Senior Roman Mothershed took a screen pass 50 yards into the red zone, before Sims ran it in from the 10-yard line for the game’s first score.

The Warriors got the ball next with great field position at the Spain Park 40-yard line and took a more methodical approach this time around.

Sims connected with Deuce Oliver on a 26-yard pass play that put Thompson in scoring position again. Four plays later, AJ Green rumbled into the end zone from 6 yards out for the 14-0 lead with 3:05 to go in the first quarter.

The next four drives led to nothing for either team, but the Jags began to put pressure on Thompson’s offensive line. Back-to-back hits took Zach Sims out of the game and a bad punt gave Spain Park the ball on Thompson’s 38-yard line.

Quarterback Evan Smallwood and the Jags wasted no time and drove for the touchdown in five plays, as Smallwood linked up with running Dakarai Shanks on a 13 yarder with 2:01 to go.

Spain Park promptly forced a three-and-out, but just as the momentum seemed to shift, the Jaguars received a shot to the gut as the punt was fumbled and recovered by Thompson at the 21-yard line.

The Warriors quickly made them pay for the mistake whe Green ran in from the 16-yard line three plays later to bring the lead back to 14 just before halftime.

Thompson’s offense was helped again by a pair of Spain Park miscues to put the game out of reach in the third quarter.

The Jaguars went for an onside kick immediately on the opening kickoff of the second half and caught the Warriors off-guard, but the ball bounced backwards and out of bounds giving Thompson the ball at the 42-yard line.

Sims returned after halftime and led the Warriors down the field in five plays with a 26-yard touchdown to a diving Kolby Hearn to cap the drive for a 28-7 lead. Hearn wrestled the highly-contested pass away for his first score of the season.

After a three-and-out, Sims and Hearn hooked up again—this time for 42 yards to put Thompson in business at the 7-yard line. This time, sophomore running back Michael Dujon put the exclamation point on the drive with a 7-yard touchdown run.

Neither team threatened for the remainder of the game outside of an 8-yard touchdown run from Smallwood after a muffed punt by the Warriors gave Spain Park the ball inside the 10-yard line.

Sims finished 13-20 passing for 222 yards with a touchdown and added 37 yards rushing with an additional touchdown. Hearn had a career best 88 yards on four receptions with a touchdown, while Green led the Warriors on the ground again with 57 yards and two touchdowns.

Smallwood went 15-25 for 92 yards and a touchdown along with a rushing score. Jack Kendrick led the Jags with three receptions for 43 yards, while Jackson Mitchell added 32 yards on 10 carries.