Montevallo shuts out Dallas County for 2nd win in a row 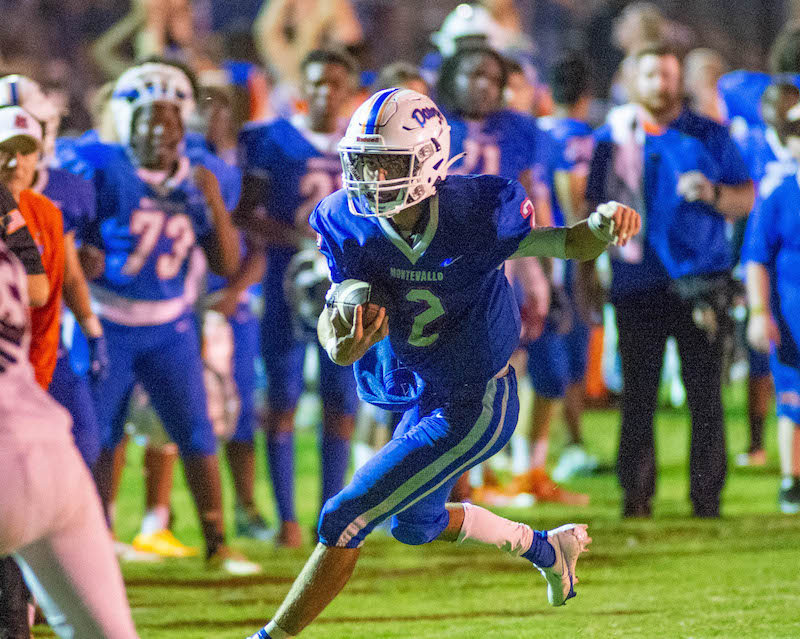 MONTEVALLO – Montevallo head coach Blake Boren knows how much homecoming means to the town of Montevallo, and he and his team delivered a 28-0 wire-to-wire win over the Dallas County Hornets on Friday night, Sept. 9 in Montevallo to cap off the week.

“Well, it’s always great to win on homecoming,” Boren said postgame. “We had a great pep rally last night and, you know, our community here is great. To us, homecoming is a community event so I felt the community won tonight.”

Montevallo opened the game with an Anthony Martin touchdown run from a yard out to take the early lead, which ultimately ended up setting the tone for a balanced night on both sides for the Bulldogs.

Dallas County got a 48-yard pass off to Isaiah Tillis on third down of the ensuing drive, but a turnover on downs later in the drive became costly for the Hornets, and Montevallo capitalized.

The Bulldogs took advantage when quarterback Braxton King hit Javon Rogers on a 39-yard pass to get on the 3-yard line, which was immediately followed by an Elfreeman Morton scoring run.

Now up 14-0, the Bulldogs forced a punt and King found Rogers on a 12-yard touchdown pass on the next drive to make it 21-0.

Dallas County struggled for most of the first half on offense. Tim Waters had a second quarter interception, and on the Hornets’ last play of the half, the kicking team had a miscommunication and couldn’t get the field goal off.

Following a Hornets’ punt to open the second half, Montevallo capitalized on a late hit out of bounds penalty when King hit Rogers for the duo’s second score of the night to take a 28-0 lead.

Montevallo went on to end the game with that score line as both sides traded punts for the rest of the game.

Boren said the defense put together a noteworthy performance.

“Yeah, again, I’m really proud of our defense,” Boren said. “You know, we dominated the line of scrimmage and that’s, you know, you win football games by blocking and tackling, and I thought again we played really well in the box and the interior. I thought our secondary played really well again.”

Proud of the team effort, Boren also said that there were still self-inflicted problems they needed to fix.

“We had a pick six that was called back off of a dumb penalty on our part, but you know, again, the thing we have to do is we’ve got to continue to get better,” he said. “You know, we had three touchdowns called back tonight over stupid stuff. I think we had two touchdowns taken off the board last week so we’ve taken 35 points off the board the last two weeks so we still have a long ways to go and a lot of corrections to make it we’re going to be successful.”

Next week, the Bulldogs take on West Blocton, a matchup that has produced one-point thrillers each of the last two seasons and one that Boren knows he needs to bring his team’s A-game to take the victory.

“They have the majority of their team back, we’ll have to have a great week of practice and that’s where our focus will need to be in order to be successful,” he said.

King led Montevallo’s offense with 160 yards passing and two touchdowns in the win over Dallas County, while Rogers finished with 99 yards and two scores on six receptions.

Martin and Morton both had one score on the ground, while Martin ran for 78 yards on 11 carries and Morton 82 yards on 10 carries.

Defensively, Hunter Lutz totaled 13 tackles to lead the Bulldogs, while Kemp Swords had five tackles and two sacks. Charlie Adams added seven tackles and a sack, while Waters had the pick six.