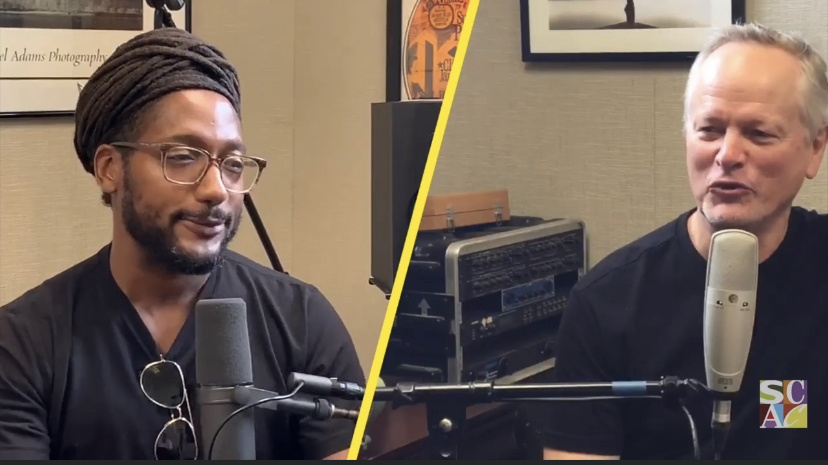 By SASHA JOHNS | For the Reporter

COLUMBIANA – For years Bruce Andrews, executive director of the Shelby County Arts Council, has been telling his community that the ability to imagine, create and inspire leads to hope. This is the mission of his organization. To bring hope to his community through the Arts Council.

This past spring, he found a new way to do that, and it has the ability to reach far beyond Shelby County thanks to the Arts Council’s new podcast, “Imagine. Create. Inspire.” The podcast hit the airwaves in March and now has 10 episodes that are available for fans to binge.

Andrews said he loves a good conversation, and his latest outreach for the Arts Council is an art form in the medium of discussion. He carefully selected local creatives from multiple genres of art to interview, and during the conversations, he gets into the nitty gritty of what makes them tick.

“People are interested in the ongoing conversation about how do you make your life run on those parallel rails as a creative,” Andrews said. “They have to figure out how to make a living and not lose their creative self, and that alone is an art form. It doesn’t matter if you are a culinary or a writer.”

Andrews said he believes everyone has the potential to be a creative, and that often the inability to tap into that creativity is was leads to stagnation.

“Art programs work in juvenile detention centers for example,” he said. “Are we trying to turn them into artists? Not necessarily. But the programs do inspire them, and that gives them hope. I try to find people to talk to that want to take their art to the next level because they inspire.”

Right now they are releasing two episodes per month, with the hope of eventually becoming weekly, and all of the guests have been interviewed in person and filmed for the companion YouTube channel.

“Eventually as we broaden who we talk to, we may not be able to do them all in person, but the hope is to have as many in person as we can,” Andrews said.

The interviews serve a broad range of purposes with the common goal of inspiring whoever hears them. When Andrews interviewed jazz musician Byron Thomas, Andrews said he knew that the topic of jazz may not be what everyone is interested in, but the conversation is one that anyone can appreciate because, at its core, it’s a conversation about creativity.

One of the most recent interviews was with musician Amacio Favor, an up-and-coming local artist. Favor will perform at the Song Blackbox Theater on Friday, Oct. 28. One facet of the podcast serves is to allow the community to get to know musicians that will be performing, which helps build excitement about upcoming shows at the Arts Council.

Those interested in listening to the “Imagine. Create. Inspire.” podcast can find it anywhere podcasts are available, as well as on YouTube. Follow the Shelby County Arts Council Facebook page for updates on new episodes, and subscribe to the podcast after listening to the first episode to be notified when a new episode comes out. Find more information about SCAC at ShelbyCountyArtsCouncil.com.