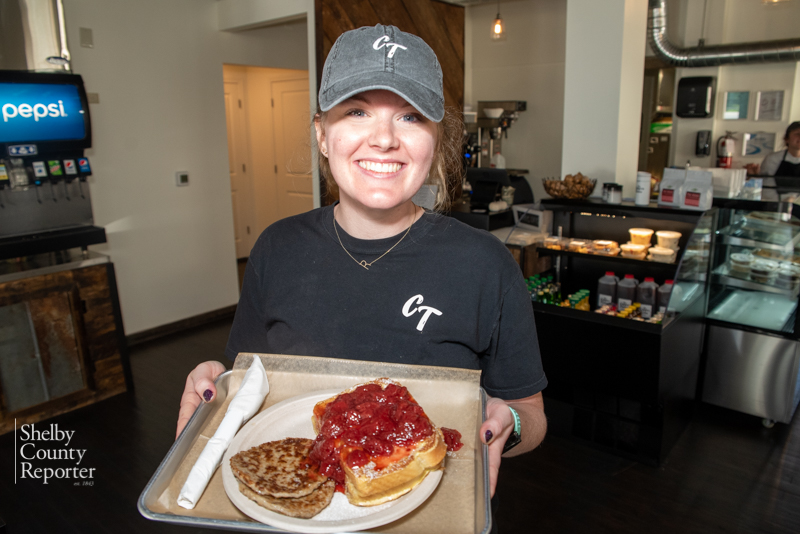 ALABASTER – A popular Alabaster restaurant, The Copper Train, recently celebrated one year of being open to the community.

“Honestly, being open for a year is one of our biggest successes,” said owner and operator Dakota Stone. “The restaurant business is hard, and not many places make it, so to have one year under our belt is a big blessing.”

Stone, who owns the restaurant alongside her husband Ryan and Stone’s parents Tim and Tammy Yeager, celebrated the one-year birthday of being open on Sept. 7 by giving away free cupcakes to everyone who purchased something at the eatery that day.

Located on the strip off Highway 31 near the railroad tracks on 224 1st St. South, The Copper Train has become a community gathering spot for those hoping to find coffee, breakfast, lunch, brunch or a freshly made sweet treat.

“Providing something new for the community has been very enjoyable,” Stone said. “There aren’t many cafes in the area or local mom-and-pop restaurants either, and being one of the few places to provide that is really special.”

Throughout the year, customer favorites and popular items within the shop have included The Copper Latte, which is the restaurant’s take on a vanilla latte. The blueberry lemon scone is one of the most popular baked goods, selling out just about every day, and while the breakfast items tend to change from day-to-day, the Copper Griddle has become a new favorite with customers.

“Everyone that tries it loves it,” Stone said.

For lunch, “The Copper Train” and “The Big Timmy” are the most ordered items. A new menu item which has quickly gained popularity are the homemade pop tarts. Other menu items include Waffle Wednesdays, holiday items and signature coffees.

“Our pop tarts are a very new item, but we have customers coming in every day just about asking for them,” Stone said.

Since opening on Sept. 7, 2021, the restaurant has continued to be a lifelong dream for Stone, who grew up helping her parents in the kitchen. After graduating from Thompson High School, Stone went on to graduate from Jefferson State Community College’s culinary school in 2017, and started making plans with her husband and parents to open her own place.

Since opening, Stone said getting the word out that the restaurant not only is open, but exists, can sometimes be a challenge.

“Every day, we have new customers come in and say ‘We didn’t know y’all were here,’ or ‘This is our first time,’ and when we tell them we have been open for a year now they are always shocked,” Stone said.

Despite developing new fans, Stone said they are also proud of the roots they have established during their first year as a local business.

“We look forward to growing even more, but we are so thankful for the growth we have seen so far,” Stone said.

Some of that growth for the future includes more being added to the catering side and long-term would be to have multiple locations. Regardless of what the future might hold, one thing is certain: Dakota and Ryan Stone and family are very thankful for the outpouring of support the community has given to their restaurant.

“We love Alabaster and Shelby County, and the community has been very supportive,” Stone said.

The business is open Monday through Saturday from 7 a.m. until 3 p.m.