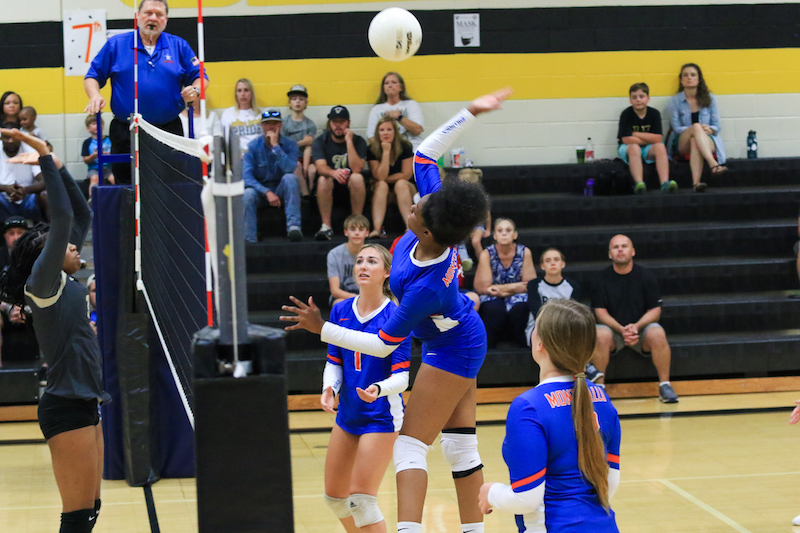 MONTEVALLO – Montevallo came out triumphantly in a match against the Bibb County Choctaws on Tuesday, Sept. 13. Going into the fifth and final set 2-2, the Bulldogs secured their latest win 3-2.

The Bulldogs started the evening on a high note, winning the first set of the match 25-19. However, Montevallo was trailing behind 2-1 by the beginning of the fourth set. The Bulldogs were defeated by the Choctaws 25-22 and 27-25 in the second and third set.

Montevallo made a huge comeback in the final two sets of the evening against Bibb County. The Bulldogs tied the score 2-2 by winning the fourth set 25-17. However, it was the final set that secured Montevallo’s latest win. The Bulldogs defeated the Choctaws 15-7 in the fifth set.

Senior Hannah Locks totaled the highest number of kills for the Bulldogs during the game, with a total of 22. Teasia Purnell and Camille Holmes followed Locks with kills for Montevallo, Purnell having nine and Holmes with five kills.

Paige Johnson served five aces in the match, while Anna Kate Jackson and Kailey Boyd each had five. Beyond that, Holmes and Locks added in three aces each.

In addition to their kills and aces, Purnell and Johnson also led the Bulldogs in blocks with both totaling one during the five sets.

Johnson led the Bulldogs with 30 assists in the match against the Choctaws.