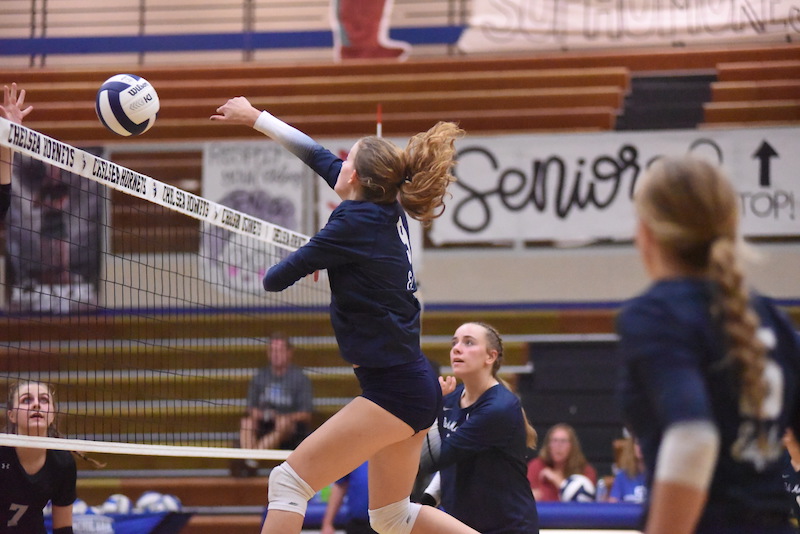 NORTH SHELBY – The Oak Mountain Eagles were able to make a statement against one of the state’s top teams on Thursday, Sept. 8, as they picked up a 3-0 sweep at home against county foe Pelham.

In the opening set, Oak Mountain was able to take early control. Despite Pelham fighting throughout, the Eagles ultimately were able to pull away for a 25-19 victory and a 1-0 lead in the match.

Needing a big win in the second set, Pelham put together its best set of the net, but the Panthers ultimately fell into a 2-0 deficit after Oak Mountain pulled away for a 25-21 victory.

The Eagles capitalized on the two-set lead by seizing the momentum in the third set with their largest margin of victory during the night, ultimately pulling away for the 25-17 win and a 3-0 sweep.

Mabrey Whitehead had two aces, had a 1.85 passing average, nine kills, a +0.346 hitting percentage, one block and five digs.

Kylee Hester and Brooke Bethers had one ace each during the match, while sophomore Londyn Wynn had one solo block and 13 digs for the evening.

Pelham’s next game will be at home against Chelsea on Wednesday, Sept. 14. Oak Mountain will travel to Hewitt-Trussville on Tuesday, Sept. 20.