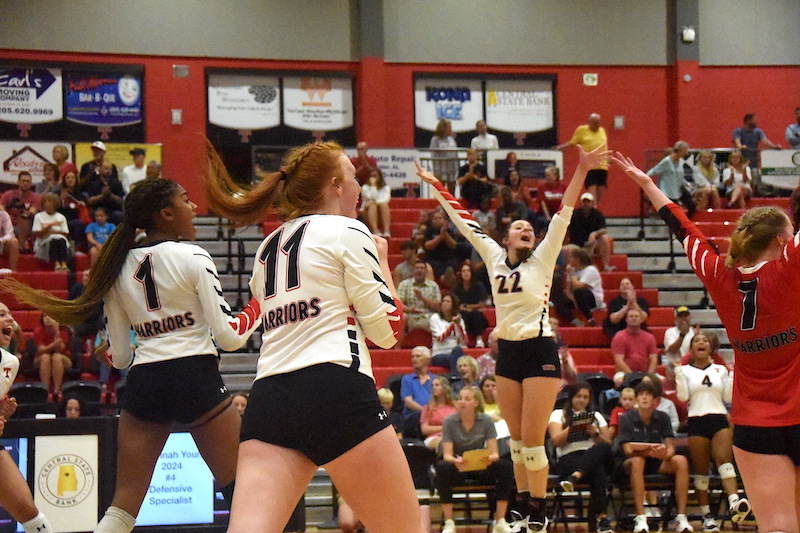 The Thompson Warriors won all three sets against Calera by at least 10 points to pick up a 3-0 sweep of the Eagles on Sept. 13. (File)

ALABASTER – The Thompson Warriors were able to pick up an in-county victory on Tuesday, Sept. 13, as they look to continue gaining confidence with a challenging schedule of area opponents still ahead.

The Warriors were able to start fast in every set and never looked back throughout the match, picking up wins of 25-15, 25-15 and 25-10 to complete the 3-0 sweep against the Calera Eagles.

In the opening set of the night, Thompson was able to pick up some early confidence by jumping out to a 7-1 advantage through the first eight points.

The Eagles bounced back with two points to cut the deficit to 7-3, but Thompson held a comfortable advantage throughout the set. Calera got as close as 13-10 at one point, but the Warriors pulled ahead with a 6-2 run to take a 19-12 advantage.

From there, Thompson coasted to a 25-15 set win by winning six of the next nine points to take a 1-0 lead in the match.

Looking to avoid a 2-0 deficit and a big uphill climb, Calera came out ready to fight in the second set.

Ultimately, however, Thompson started to create some separation after breaking a 9-9 tie by taking a 12-9 lead.

Now up 2-0, Thompson had all the momentum with Calera in need of winning three consecutive sets.

The Warriors capitalized on that and made the third set the most dominant of the night.

That finished off a stellar night for the Warriors, who never allowed Calera any closer than 10 points at the conclusion of the three sets.