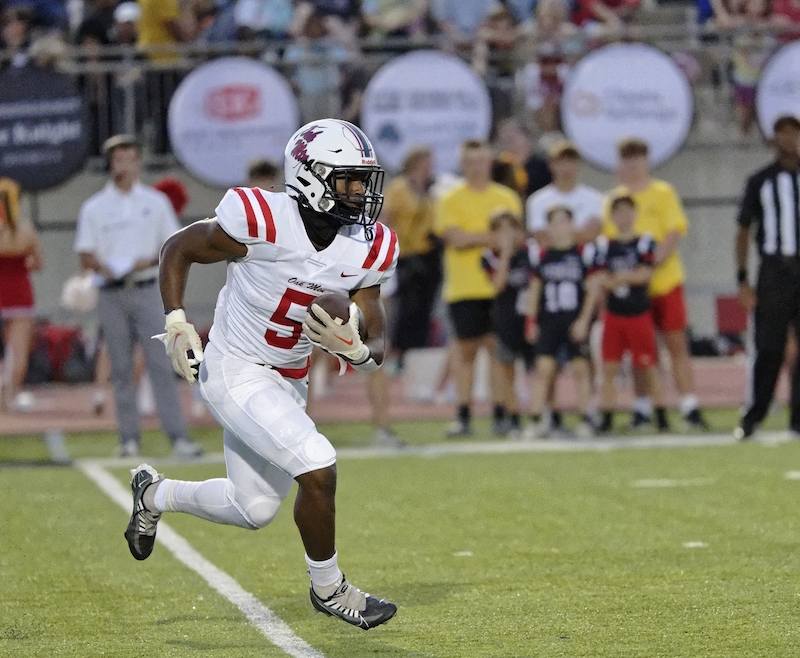 The Oak Mountain Eagles led throughout their matchup with Tuscaloosa County, but a last-second touchdown from the Wildcats made the difference in a 34-31 loss for the Eagles. (File)

NORTHPORT – A go-ahead touchdown run with 3 seconds left to play sunk visiting Oak Mountain in a 34-31 loss to Tuscaloosa County on Friday.

Tuscaloosa County’s Kevin Riley scored the first of his four touchdowns less than a minute into the game, on an 83-yard spring for a 6-0 lead.

Oak Mountain answered with a 42-yard field goal by Garrett Murphy about midway through the first quarter, and then took the lead on an 11-yard run by Will O’Dell a few minutes later. Murphy’s extra point was good for a 10-6 edge.

It was O’Dell again, this time from 1-yard out, with 9:47 remaining in the second quarter to make the score 17-6 after Murphy’s point-after.

Sawyer Deerman ran it in from 30 yards out to pull the hosts to within four points of the lead at 24-20, with a couple of minutes still left in the third quarter.

O’Dell accounted for his fourth touchdown of the game about a minute into the fourth quarter, this time with a 20-yard pass to Jackson Blackwell.

Murphy’s point-after made it 31-20, but what seemed like a commanding lead would not hold up.

Riley ran in from 1 yard out with 8:13 on the clock in the fourth quarter, and a successful 2-point conversion attempts made it 31-28 in favor of the visiting Eagles.

Riley then ran in the game winner with just 3 seconds remaining on the clock to send Oak Mountain to its third straight loss.

Smith led OMHS with 62 receiving yards, while Blackwell had three catches for 29 yards.

Murphy and Devan Moss paced the Oak Mountain defense with seven tackles each, while Bobby Laury had five tackles. Robert Yoder IV had an interception.

They visit Briarwood for a non-region game on Friday, Sept. 23.