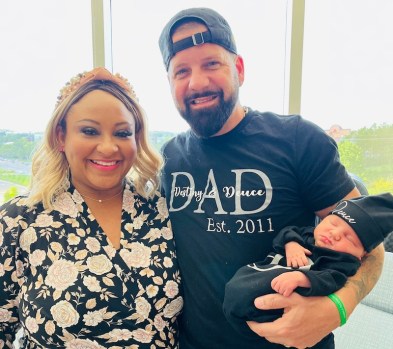 Lacretia and Dustin Riekeberg with their newborn son, Destin “Deuce” Alijah King Riekeberg. Destin takes his first name from his late sister, Destiny, who died from a rare form of cancer in 2020. (Contributed) 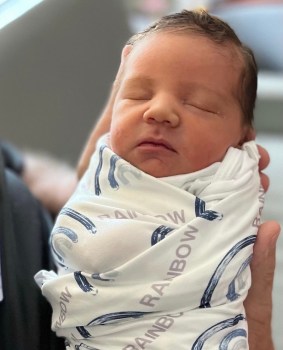 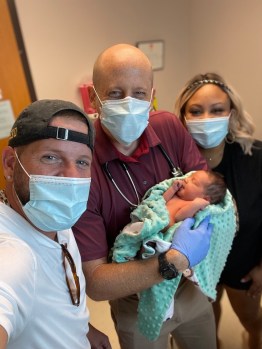 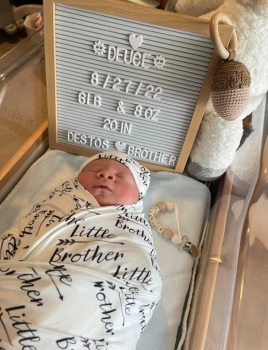 PELHAM ‑ Many believe the birth of a baby to be a gift from above—for the Riekebergs, this seemed doubly true as less than two years after losing their only child, Destiny, to a rare form of childhood cancer, the couple celebrated the birth of a son.

“We honestly just couldn’t believe he was here and that we were parents again,” said Lacretia Riekeberg, who alongside her husband, Dustin, tried to plan Destin’s birth so that he would arrive at 7:07, the time of Destiny’s passing that is spiritually symbolic for the family.

“God gave him his own time at 9:04 a.m., and he came out perfect. No crying, no issues. It was just a big sigh of relief and it was like one of the biggest blessings He could have given us is to let us be earthly parents,” she said.

That sigh of relief came after many moments of uncertainty. Between her 24th and 26th weeks of pregnancy, Lacretia became sick and had to be hospitalized, on and off, for a total of about eight days. After returning home from her third hospital stay, they considered each week to be a new milestone.

“It was a stressful time, and that little story that Destiny wrote about leaving it to God just kind of reset the clock,” said Dustin, referring to a note Destiny had written about why people should not worry.

After two weeks had passed without having to be re-admitted, Lacretia said she knew it was going to be OK. Then on a Friday, she was out shopping and enjoying some Chinese food when her water broke, and the couple rushed to Grandview where she was in labor for 15 hours.

Looking back on the pregnancy, Lacretia was hardly sick except for that two-week period in the hospital.

“We were just in awe of how great this pregnancy had gone,” she said. “Our lives changed all over again, and we were just excited for this new little blessing in our lives.”

Of course, family members wanted to see little Deuce as quickly as possible. Dustin’s sister, Amber, claimed bragging rights as she was the first to arrive in Alabama from Missouri—her bragging was premature, however, as their mom, Toni Riekeberg, had been on Facetime in the delivery room.

The family also enjoyed visits from friends including Destiny’s friend Sydney, and Ace, who befriended Destiny at Children’s Hospital, and refers to himself as Deuce’s “big brother.” Ace said he looks forward to teaching Deuce to play basketball.

In the midst of all the joy and happiness, however, remains the grief of Destiny’s loss—something that will never go away.

“I seem to miss Destiny a whole lot too now that he’s here,” said Lacretia. “You can never replace the child that you lost. You’re always going to have a hole in your heart even though you’re blessed.”

But on the other side of grief, the family continues to be blessed by Destiny’s story and legacy, and by those who were touched by her faith and bravery in the midst of her battle with cancer—many of whom stuck around for the next chapter in their lives.

Even Dr. Charles Schlappi, who first diagnosed Destiny after several missed diagnoses, has a role in the family’s new life together, as he will be the pediatrician for baby Deuce.

“I don’t know how it works up there, but I just feel that (Destiny) had a say in us having kids again,” Lacretia said.

Now, when the couple looks at Deuce, they can see features that remind them of Destiny.