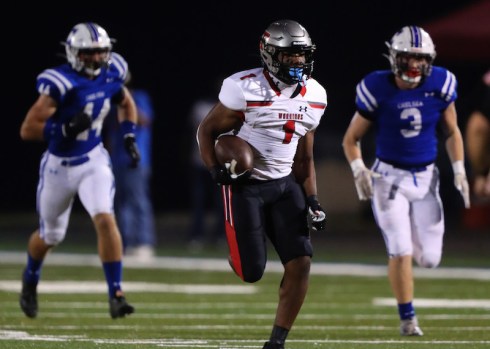 Thompson picked up a 48-3 victory against Chelsea on Sept. 16 to pick up its third region win in a row thanks to a big night for the offense. (For the Reporter/Cari Dean) 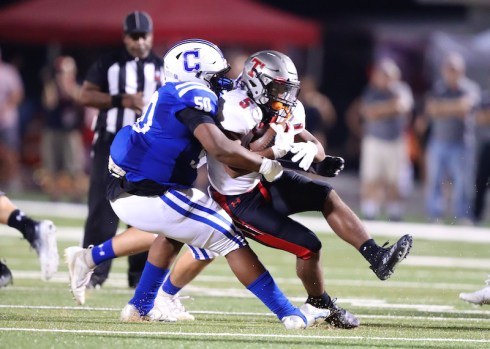 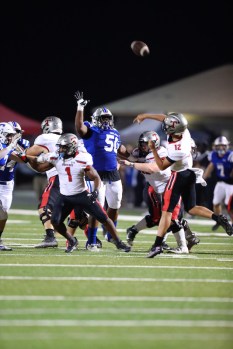 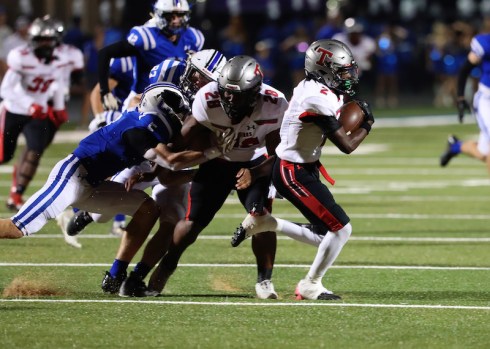 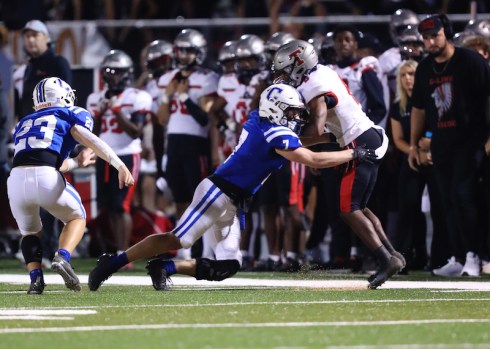 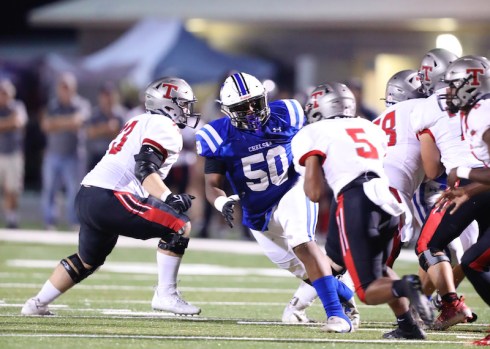 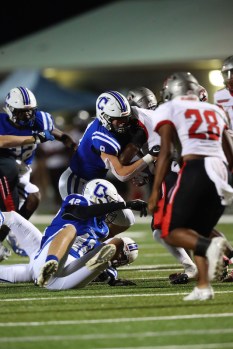 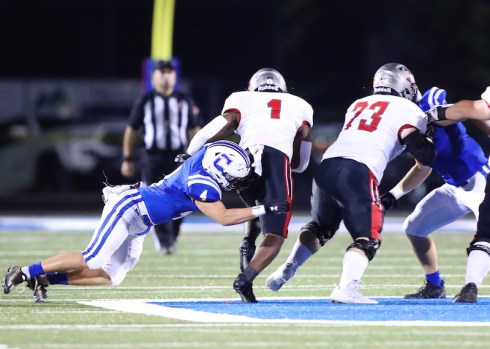 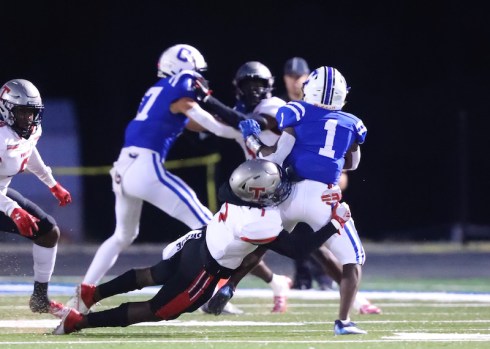 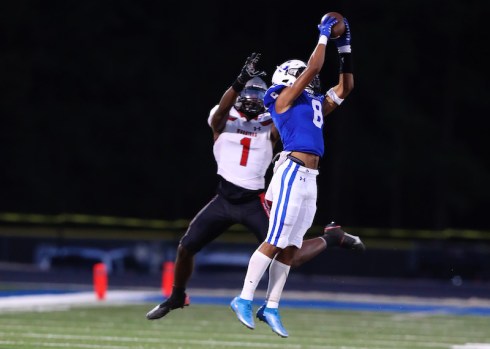 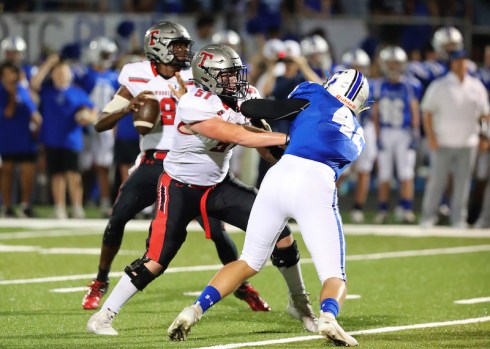 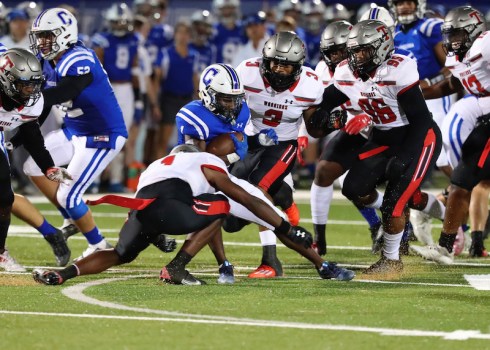 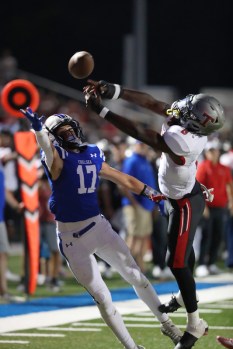 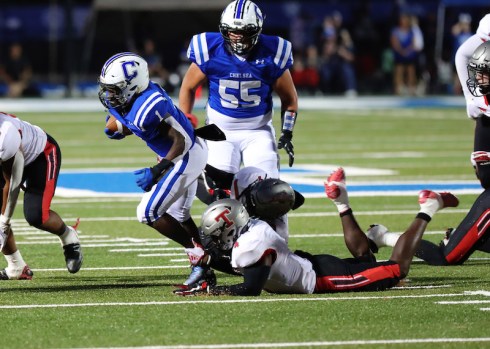 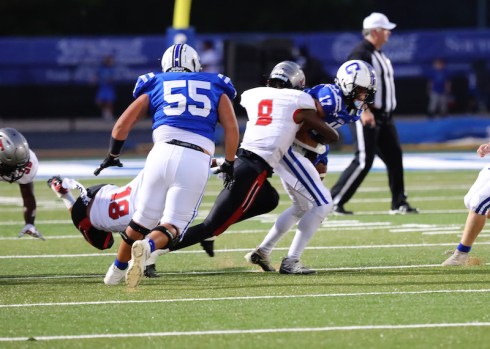 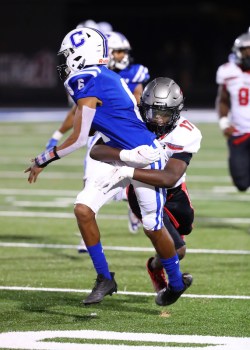 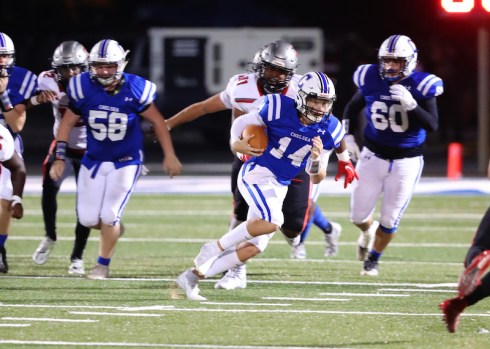 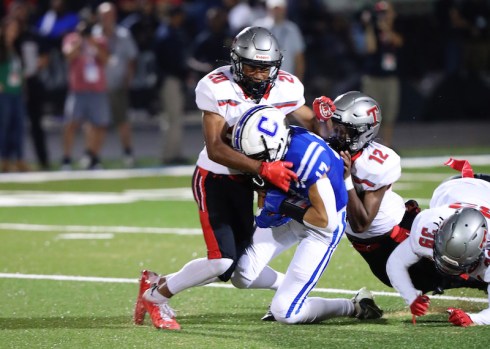 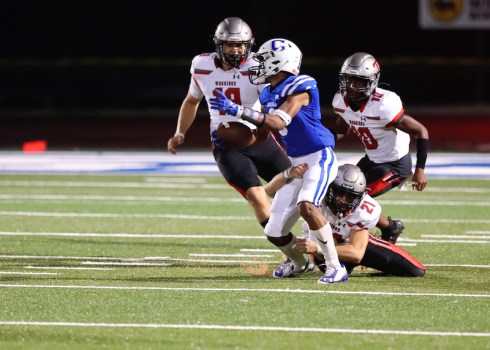 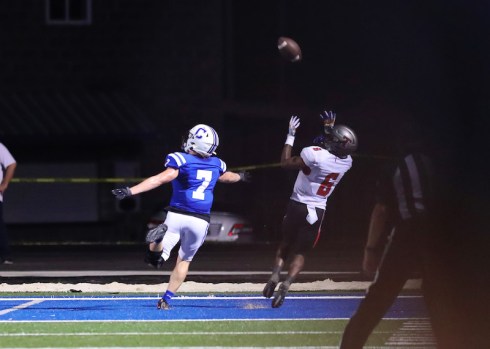 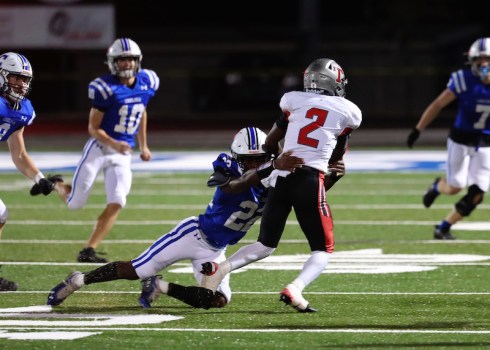 CHELSEA – A night that started with Chelsea controlling the clock early ended with Thompson’s breakout party on offense in a third straight region victory for the Warriors.

After falling behind 3-0 on a long opening drive from the Hornets that lasted more than seven minutes, Thompson scored 48-unanswered points the rest of the way to pick up a 48-3 victory on the road on Friday, Sept. 16.

An opening half that seemed to be favoring the home team quickly shifted in Thompson’s favor after Chelsea took an early 3-0 advantage.

Chelsea’s opening drive of the game went 14 plays and got all the way down to the Thompson 21-yard line, but the Hornets ultimately had to settle for a 37-yard field goal from Jack Seymour.

That became the theme early for Chelsea, but the three points also marked the only ones of the half for the Hornets, as missed opportunities were eventually turned into Thompson points.

The Warriors looked up to their old tricks offensively in the half, scoring in two plays to answer Chelsea’s field goal.

Green went 17 yards and 58 yards on back-to-back runs to give the Warriors a 7-3 advantage just 24 seconds later.

Chelsea responded with another physical drive, seemingly controlling the line of scrimmage, but an interception by Thompson’s Caleb Ballard nine plays into the drive on third-and-6 gave the Warriors the ball back at midfield.

Thompson capitalized with a 10-play drive that saw an important 12-yard third-down catch from Roman Mothershed, followed shortly after by a 9-yard touchdown run from Green to make it 14-3 with 7:02 left in the second quarter.

A sloppy series of events unfolded after with Chelsea punting on its next drive near midfield, Thompson punting and forcing a Hornets’ fumble, but then Chelsea intercepting a Zach Sims pass.

Chelsea, however, had two penalties on the interception return, backing the Hornets up to their own 8-yard line.

Thompson again capitalized on the mistakes, forcing a three-and-out and getting the ball back with 32 seconds to play.

And for the second time in the half, the Warriors scored in two plays or less. This time, on the first play of the drive, Trent Seaborn stepped in at quarterback and threw a pass out wide to Green, who went 42 yards to the house for a 21-3 halftime lead for Thompson.

“It boosted my confidence,” Seaborn said of the pass. “After that touchdown, I just wanted to keep going back in. I was really excited after that.”

It also gave the Warriors a 17-point lead going into the break and the ball to start the second half.

The Warriors capitalized by getting the ball to start the half, scoring quickly again, this time in four plays. Seaborn hit Kolby Hearn for 65 yards and then Green ran the ball in for his fourth-and-final touchdown from 9 yards out to make it 28-3 with 10:42 left in the third quarter.

“That’s a close game at half time and you have to give Chelsea credit, they came out and played hard, they controlled the ball and had a good game plan,” Freeman said. “We had to click on offense because we weren’t getting the ball and those games will drive you crazy. We had a good plan offensively and we hit a play the second play of the game for a touchdown. Then, we came out and had a play right before half that gave us a big touchdown right before the half. Then, we got the ball coming out of the half and that drive was critical to give us a cushion to play with.”

As for the offense, they weren’t even close to done.

They quickly got the ball back and on three runs totaling 35 yards from Michael Dujon, the Warriors scored again to make it 35-3.

Then, Seaborn got back in on the action when he connected with Korbyn Williams on an 18-yard fade route that made it 42-3 with 1:54 left in the third quarter.

“I noticed that Chelsea’s defense, that their safety would rotate to the two-receiver side, so I knew we would be one-on-one to the one-receiver side, and I have so much trust in my receivers, I know they can make that play and go make that catch,” Seaborn said.

Thompson added one more touchdown with 34 seconds left in the third quarter when Omari Thomas trotted in from 15 yards out to create the final score of 48-3.

“It’s all about them coming together and finding out, ‘Who are we?’” Freeman said after. “We’re finding out a little more every week what our kids can do, they’re finding out what they can do, and we have to do a good job of putting our kids in the things they can do really good. We’re creating things every week to fit our kids, and that’s all we can do.”

Chelsea was led by Carter Dotson with a 14-22 game featuring 127 yards passing, while Emerson Russell totaled 50 yards on 18 carries.