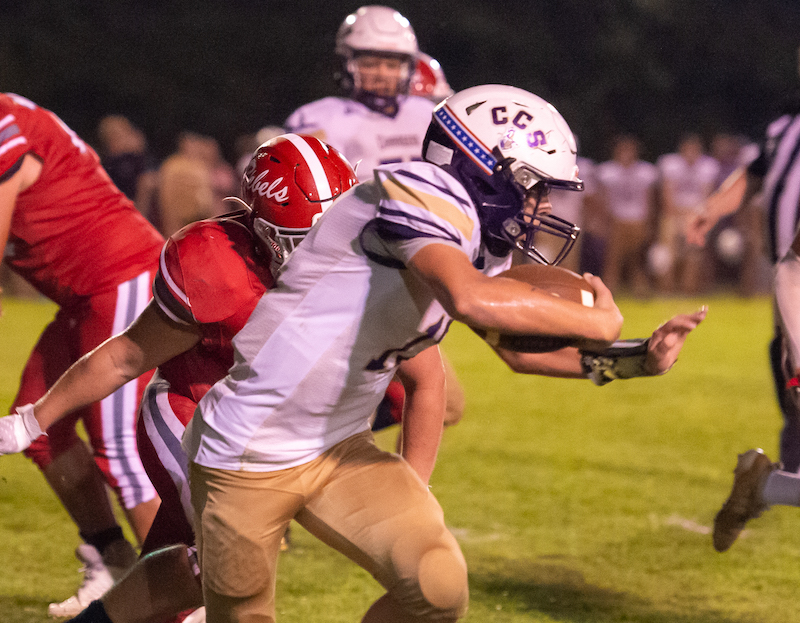 The Cornerstone Chargers picked up a thrilling 52-50 win over Springwood on Sept. 16 thanks to a 55-yard touchdown catch from Logan Lightsey off a pass from Zeke Adams as time expired. (For the Reporter/Larry Dancy)

COLUBMIANA – The Cornerstone Chargers made a statement during their first year as an AISA 8-man team on Friday, Sept. 16, and have now become a contender to win a state championship.

Taking on fellow undefeated team Springwood, the Chargers had a chance to show just how challenging they can be for opponents with their toughest game of the season, and despite a 50-46 deficit going into the final play, they did just that.

Taking on a springwood team that had scored 40 or more in every game with wins of 40-0, 52-32 and 60-8, Cornerstone did allow the Wildcats to score 50 or more for the third game in a row, but it didn’t matter thanks to the offense.

The Chargers got their best offensive game of the season against a solid defense, and they remained hot until the final play of the game when quarterback Zeke Adams hit Logan Lightsey for his only catch of the night.

Lightsey caught the ball on a flare route to the sideline with 12 seconds left, then, he let his athleticism take over, making guys miss all the way to the end zone as the final seconds ran off to cement the thrilling victory.

“I’m speechless,” head coach James Lee said after the win. “It’s the greatest game I’ve ever seen or been a part of. This group of guys just battle each other and never quit.”

That marked the end of a special night for an offense that totaled more than 537 yards in the 52-50 victory.

His top target was Noah Schober, who reeled in six catches for a jaw-dropping 249 yards and two touchdowns in the victory. Beyond him, Jackson Waugh and Caleb Boackle had 52 and 26 yards, respectively, while Waugh added two more touchdowns and Boackle added seven rushing yards.

Adams was the leader defensively as well with 13 tackles and two fumble recoveries, while Boackle added eight. Lightsey and James Wilson finished with seven tackles each, while Lightsey added two sacks and a fumble recovery and Wilson posted an interception and fumble recovery.

“That was huge,” Lee said of the victory. “This young team has grown up.”

Cornerstone is now 3-0 on the season with no games left on their schedule against a team that currently has a winning record, setting them as the AISA 8-man frontrunner near the midway point of the season.