Marching band is a sport 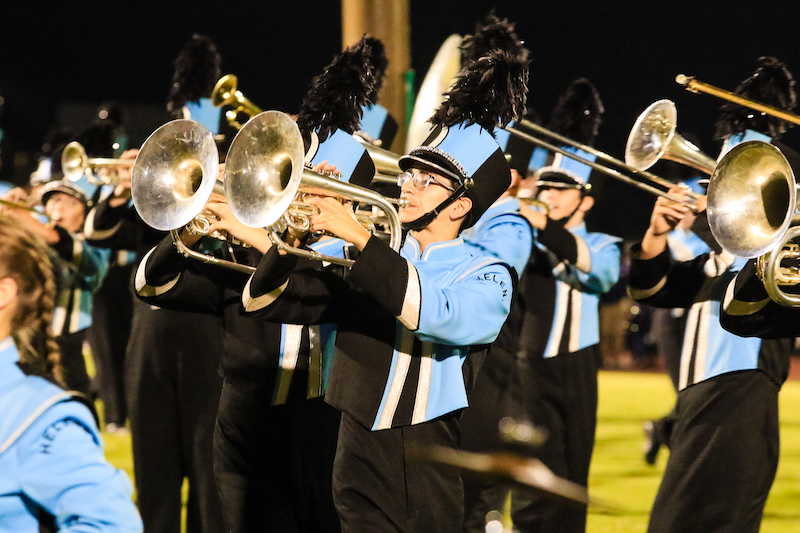 This year’s Showcase of the Bands stands as an excellent example of why band should be considered a sport. (For the Reporter/Dawn Harrison)

This year’s Showcase of the Bands was the first one I’ve attended since my days in the Pride of Shelby County Marching Band during high school. It was an almost surreal experience being in that kind of atmosphere again and knowing what it is like to be in these students’ shoes.

I remember the effort it takes to memorize drills and constantly repeats the same sections of a show. I also remember the finality one feels at the very end of performing a show to a crowd and judges.

Seven bands performed at this year’s Shelby County Showcase of Bands. The goal of the showcase is to provide students with an opportunity to display their show before an audience and judges in a non-competitive environment, so they are prepared for upcoming competitions.

Helena High School’s Husky Marching Band was present at the event with a show entitled, “Welcome to the Jungle,” and while it was certainly a good show, it stood out for one unfortunate reason.

Sometime during the performance of the song, “Jungle Boogie,” one of the band members collapsed onto the field. The show stopped, and people immediately rushed onto the field to attend to the student’s needs. Thankfully, they recovered and were ushered off the field in a golf cart. The Huskies then went back to set three of their show and finished their performance to a standing ovation from the crowd.

One moment from that situation stood out to me.

“This is why this is a sport,” the announcer said during the interruption. “They put blood sweat and tears into this.”

It is possible that your average student or even parent does not even comprehend the effort that these students put into practice and performance. They have to deal with the heat and strain of marching across the field in their uniforms all while playing their instrument correctly and in time with the beat.

A sense of family can be derived from spending so much time with one another, especially within instrument sections. Despite the situation, the Huskies were still able to carry on and deliver a great show.

However, what the audience may not have realized is the importance of a singular member in the band. There was a space or “hole” now where their fellow bandmate was, and the students that were around them in the show now had to adjust accordingly. They had to perform the rest of the show without a fellow band member there as a point of reference to guide them.
No matter their section or position, every member of the band is vital for their contribution.

Not all band performances are equal, some certainly stand out more than others. However, the next time you might consider discounting a band as “bad” or “underwhelming,” understand the effort and passion that these students put into the performance. For the audience, it is usually just the halftime show but for them, it is the main event.