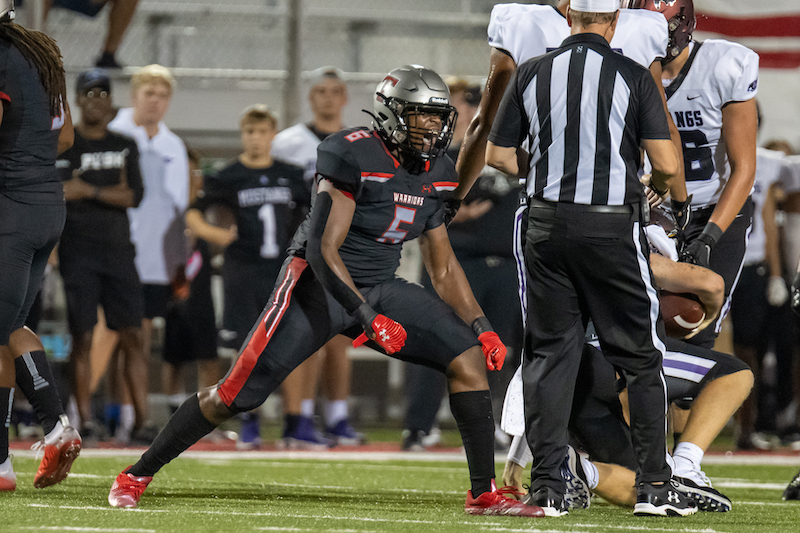 The Thompson Warriors will host Class 6A No. 1 Clay-Chalkville this Friday in the county’s Game of the Week. The Cougars will bring a 20-game winning streak into Warrior Stadium for this battle of defending state champs. (File)

It may not be a region game, but it doesn’t get much bigger than a showdown between the defending state champions in the two highest classifications in the state, and that’s exactly what we’ll get when Thompson hosts Clay-Chalkville at Warrior Stadium this Friday.

The last three years, Thompson has reigned supreme in the state as the top team, but this year, Clay-Chalkville may be the best team regardless of classification, meaning this game could be the one that makes that separation come the end of the 2022 season.

Thompson may have started this season 0-2, but those two games have prepared them for games like this and the battles still ahead in Class 7A, Region 3, which include Hoover and Hewitt-Trussville.

In those two losses to Buford and Lipscomb Academy, the defense played well enough in both to win, but growing pains for the offense became the difference in a 38-7 loss and 24-14 loss as turnovers were costly.

Since then, however, the Warriors have bounced back with wins of 34-14, 35-14 and 48-3 against Vestavia Hills, Spain Park and Chelsea.

Thompson’s defense has been consistent from the start of the season, giving up 14 or less in every game, even in those opening two games.

That will be the biggest benefit heading into this matchup against the Cougars, who have been dominant on both sides of the ball this season, but did show one flash of struggle on the offensive side of the ball.

Clay-Chalkville is scoring 43.6 points per game and has scored 42 or more in four of the team’s five games so far, but the one blemish came in a tight 14-12 victory against Pinson Valley.

The Cougars, who are loaded with athletes and speed on the offensive side, struggled to get into rhythm in that game against the best defense they’ve seen so far.

Now, they get a Thompson team that is arguably better on the defensive side of the ball with some of the best players in the country.

That, to me, automatically makes this game a tight one just based on the defensive play of both.

Clay’s defense has been nothing shy of dominant this season, giving up 7.8 points per game and 19 or less in every game.

We’ve seen both offenses hit struggles at some point this season, while neither defense has really flinched yet.

That said, health is going to be key as well.

Thompson has been down a few players, and how healthy they are going into this game will be important, especially with bigger region games down the road. It won’t be worth risking anything this week, but I expect both teams will see guys playing if they are at all capable because of what this matchup will mean to each of them.

Ultimately, the defenses will keep both in this game, but which offense can convert against the opposing defense will make the difference in the final score.

Thompson has had some concern there at times this season after losing 90 percent of its production on that side from last season, but the Warriors have started to show tremendous growth in recent weeks.

Last week, they put together their best game of the season in a 48-3 win against Chelsea, scoring in five plays or less on all but one scoring drive in the victory.

AJ Green has become one of the top backs in the state, scoring four times last week, while Korbyn Williams, Deuce Oliver, Roman Mothershed and Kolby Hearn are all starting to grow at the receiver position.

The big question mark is the quarterback position.

Zach Sims is the junior who played at times last year and has flashed excellence at time this season, especially against Vestavia and Spain Park. That said, the coaching staff has one of the best eighth grade quarterbacks in the country in Trent Seaborn and its clear that they are excited about him because of the opportunities they are giving him.

Seaborn led the offense last week, going 5-5 for 134 yards and two touchdowns in just a few drives in the middle of the game.

Usually, you want one person to have command of the offense, but it’s becoming evident that both quarterbacks can play off one another. Sims offers a dynamic athlete who can run the ball and has a strong arm, while Seaborn has shown incredible accuracy, a strong arm and an eye for reading defenses.

How that position performs this week likely determines if Thompson wins the game going up against the toughest defense the Warriors have seen since the two opening games.

I think they’re starting to piece together just what they have in the two standouts, and I think the offense continues to grow this week.

That paired with the defense they’ll put out makes it tough to go against the three-time defending state champs.

That said, Clay may very well be the best team in the state this season regardless of classification. The Cougars haven’t won 20 in a row without talent, and they have a real chance of winning this one.

Simply put, if both teams show up with their A game, it will be an incredible showdown. But if either shows up not focused, the other will be ready to capitalize.