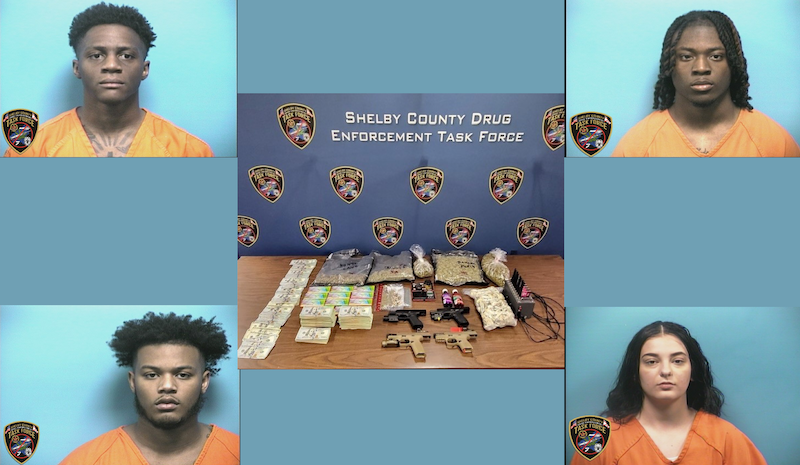 Four people, including three Helena residents, were arrested during a drug best in Helena on Tuesday, Sept. 20. (Contributed)

HELENA – Four people were arrested on multiple drug charges in Helena on Tuesday, Sept. 20 as part of a narcotics search by the Shelby County Drug Enforcement Task Force and the Helena Police Department.

Three of those arrested were Helena residents, while the other is a resident of Pinson.

The search took place on the 1400 block of Secretariat Drive in Helena and resulted in the arrest of Nicolas Darrell Blackburn, 22, Brandon Juwan Sledge, 21, Tyrin Christopher Davis, 22, and Ashlyn Grace Dill, 18.

Blackburn and Sledge are Helena residents and former standout players and starter for the Pelham football team, while Davis shares the same address in Helena. Dill currently lists an address in Pinson.

During the search of the house, investigators seized three pounds of marijuana, two pounds of mushrooms, two bottles of codeine, more than 90 grams of THC wax, drug paraphernalia, multiple firearms and more than $29,000 in assorted U.S. currency.

“The Shelby County Drug Enforcement Task Force realizes that without collaborative efforts between other agencies, these type of narcotics investigations would not be successful,” the task force said in a release. “We would like to thank the Helena Police Department for their assistance in this operation and their ongoing support of our mission.”

Blackburn, Sledge and Davis are currently being held in the Shelby County jail with each on bonds totaling $107,000, including a $100,000 bond for trafficking marijuana for each.