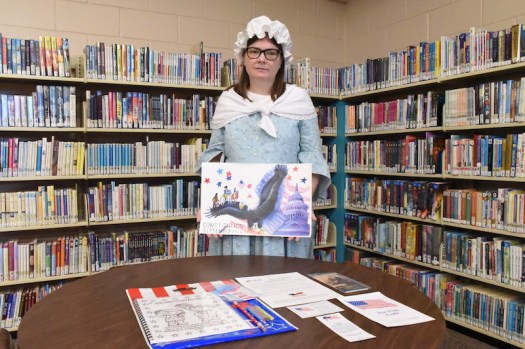 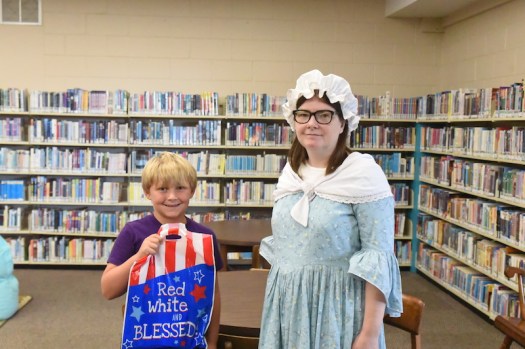 The celebration of the constitution was started by the Daughters of the American Revolution, and Constitution Week is celebrated from Sept. 17 to Sept. 23 each year. In 1955, DAR petitioned Congress to set aside this week annually to commemorate the Constitution’s history and importance.

Local resident Jenny Mumpower did her part in helping others participate in the celebration of the Constitution.

“I think it’s just important to read the Constitution and what this country was founded on,” Mumpower said. “These were Revolutionary War soldiers that fought for our country, did not have money (and) they weren’t dressed in nice uniforms. They were barefooted and they struggled.”

Mumpower is the Constitutional Chairperson of the local David Lindsay chapter of DAR and president of the Chelsea Historical Society.

Dressed in colonial attire, Mumpower visited the Columbiana Public Library, the Chelsea Public Library and the Mt. Laurel Public Library with party favors which contained activities for children alongside the Flag Code and a copy of the Constitution.

In the September meeting of the local DAR chapter, Chapter Regent Stella Tipton praised Mumpower for her efforts.

“We are so proud of Jenny,” Tipton said. “She and our former Regent, Phoebe Robinson, have done so much to pave the road to our chapter’s focus on educating our younger generation, not only about our founding fathers but the Constitution.”

Those interested in the Chelsea Historical Society or would like a tour of Chelsea’s Historical Museum may visit its facebook page at Facebook.com/ChelseaAlHistoricalSociety. Memberships are also available for the Society for $20.