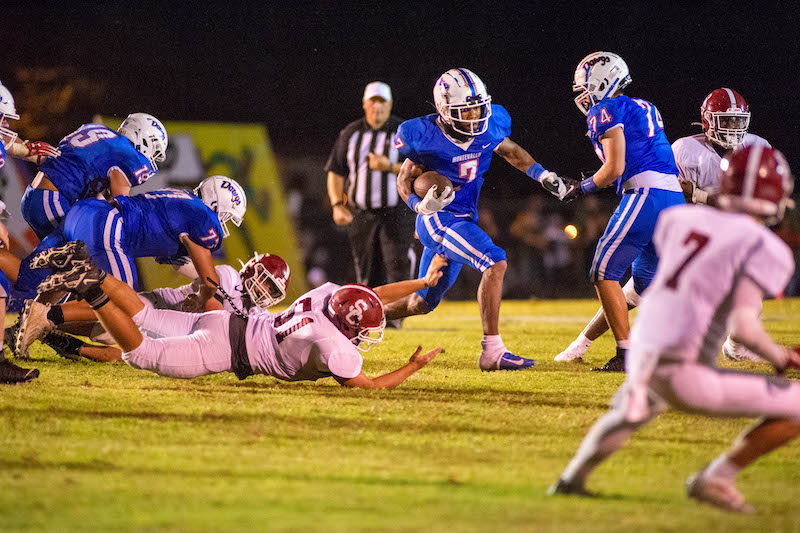 The Montevallo Bulldogs narrowly overcame a 14-0 deficit against Jemison on Sept. 23, but they ultimately fell 20-12 in a tight loss. (File)

JEMISON – The Montevallo Bulldogs narrowly dug out of a 14-0 hole against Jemison in a non-region game on Friday, Sept. 13, but the Panthers ultimately scored a touchdown in the fourth quarter that led to a 20-12 loss for the Bulldogs.

Montevallo gave up one touchdown in each of the first two quarters to fall behind 14-0 in the second quarter, but the Bulldogs fought back to make it 14-12 late in the third quarter.

Jemison, however, put one final drive together that made the difference early in the final quarter to cement the victory.

The Panthers took the lead late in the first quarter with a 15-yard touchdown run to make it 7-0 with 1:33 remaining in the period.

It didn’t take long for Jemison to add to the lead, as about four minutes of game time between the end of the first quarter and start of the second became a key portion of the game.

After getting the ball back quickly, the Panthers put together one of the longest plays of the night on a 55-yard touchdown run to extend their lead to 14-0 with 10:07 left in the second quarter.

Montevallo, however, didn’t let the first half end without some fireworks as well.

As time expired in the opening half, the Bulldogs connected on their first touchdown of the half when Braxton King hit Jaydien Rutldge for a 4-yard touchdown pass.

A missed extra point, however, made it 14-6 going into the halftime break.

The third quarter turned into a stalemate for the majority of the 12 minutes, but again, the Bulldogs found some late magic as they continued their climb back into the game.

This time, King hit Javon Rogers for a 49-yard touchdown pass with 2:51 to go in the quarter, but the 2-point attempt failed to keep the Bulldogs in a deficit of 14-12.

Early in the fourth quarter, Jemison was looking for the final blow, and the Panthers got it when they ran in an 11-yard touchdown at the 10:05 mark of the quarter.

A missed extra point, however, left the door open for Montevallo, trailing by eight with still plenty of time left.

But in a defensive game for the most part, neither team could muster much offense the rest of the way, which kept the clock running and led to the 20-12 final.

Now 2-3 overall and 1-1 in region play, Montevallo will hit the road for the third week in a row on Friday, Sept. 30 for a region showdown with 2-3 Sipsey Valley.