Vincent bounces back with in dominant fashion at Childersburg 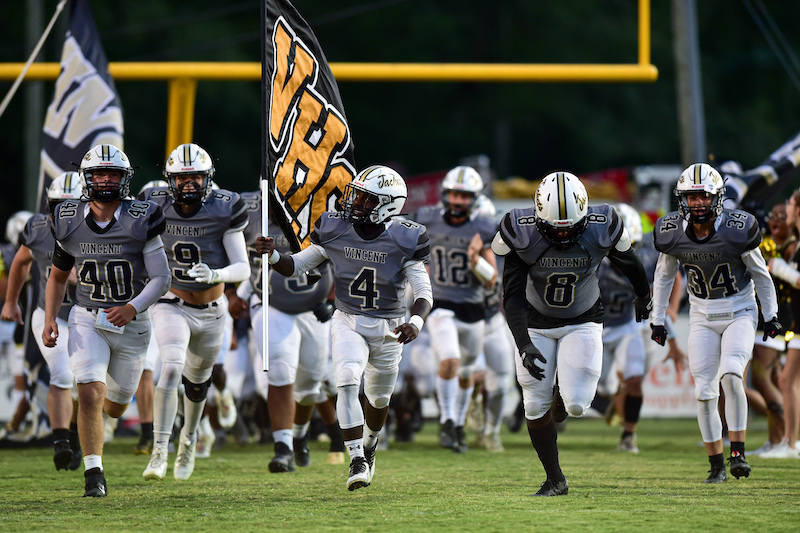 By STEPHEN DAKWINS | Special to the Reporter

CHILDERSBURG ­– Vincent bounced back from a heartbreaking loss last week to get back on the winning track with Friday’s 42-13 victory at Childersburg.

VHS Coach Lucas Weatherford said the Yellow Jackets started slowly with costly penalties and turnovers in the first half.

“It was hard to get them back up after that game last week,” Weatherford said about the 36-35 loss to B.B. Comer in a showdown between two of the top teams in Class 2A’s Region 4. “They were kind of heartbroken and had a tough week of practice.”

Still, the Jackets defense forced a turnover on downs on the first possession of the game, and Vincent (5-1 overall, 2-1 in region play) quickly took the lead for good on a 6-yard touchdown pass from Blake Allums to Zac Carlisle. Tray Youngblood ran in the 2-point conversion for an 8-0 lead.

Childersburg (1-5, 1-2 in Class 3A, Region 4) answered with a touchdown on the ensuing possession, but Vincent stopped the 2-point conversion attempt and held onto the lead, 8-6.

A five-play drive by the visitors was capped by a 21-yard touchdown run by RyKelus Robertson, and Ty’Qun Goodman’s point-after made it 15-6.

Weatherford said mistakes cut short several promising drives, or the lead could have been larger.

“It was just an ugly quarter,” he said.

Robertson’s play on the night was anything but ugly. The junior churned out 353 rushing yards and four touchdowns on 28 attempts.

Robertson sprinted into the end zone from 69 yards out for a touchdown on the first play of the second half, and Aiden Poe ran in the 2-point conversion for a 23-6 lead.

Childersburg scored again to stay within striking distance at 23-13, but after an interception and return by Carlisle, Robertson struck again, this time with a 14-yard scoring run to make it 29-13.

In the fourth quarter, VHS put the game away with a 15-yard touchdown run by Robertson and a blocked punt that was returned for a touchdown by Phoenix Maxwell.

Weatherford said he was proud of the play of his defense, especially coming off the tough loss and facing a Childersburg team that employs a single wing attack that makes for difficult preparation.

Despite being separated by just about 10 miles, Vincent and Childersburg had not faced off since 1989. According to the best available records, Vincent had not recorded a win in the series since the first game between the teams, in 1947.

“At the end of the day, it was a sweet win,” Weatherford said.

The Yellow Jackets visit Ranburne on Friday, Sept. 30, to start a stretch of four consecutive region games to close out the regular season.