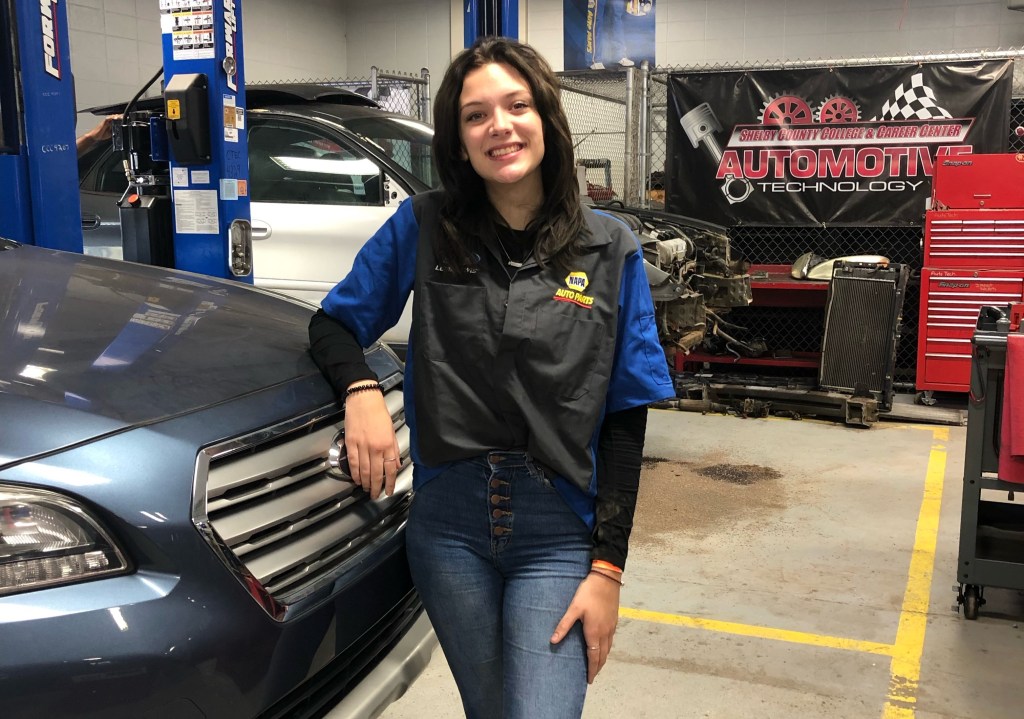 By the time she was 14 years old, Lauren Sawyer knew how to change tires and oil thanks to her grandfather. Since then, he’s taught her to work on brakes and batteries too. (Contributed)

COLUMBIANA – There are 48 students in the auto tech class at CTEC in Columbiana and out of those 48, only one is female.

Lauren Sawyer, a junior at Helena High School, has watched her grandfather Curtis Boothe since she was “knee high to a grasshopper,” a phrase they both used when asked about when her interest in what was under the hood of a car became evident.

When she was about 10 years old, Sawyer began hanging out with her grandfather when he worked on family automobiles. Boothe is a master technician who works for the Shelby County Highway Department right next to CTEC in Columbiana.

“It’s funny,” Boothe said, “I have two grandsons who don’t care at all about working on cars, but my granddaughter loves it.”

By the time she was 14 years old, Sawyer, who is also a former Helena Belle and spends some of her extra time learning to figure skate, knew how to change tires and oil thanks to Boothe. Since then, he’s taught her to work on brakes and batteries too.

Sawyer knew her path as a student was going to be tied to CTEC early on. Sawyer, the only girl among the entire class, was voted to be the president of the class this year.

“My dream is to go on to Colorado Mountain College after I graduate to become a diesel mechanic,” she said. Sawyer said her time at CTEC will prepare her well for that goal.

Robert Irwin, the auto tech program teacher at CTEC, said that his students not only have the chance to earn nationally recognized credentials while in his course, but that 75 percent of his class work is hands-on, and the other 25 is spent in a regular classroom setting.

In the meantime, when Sawyer isn’t visiting her hockey-playing boyfriend in Atlanta, she’s spending time with her grandfather, rebuilding his father’s 1966 Ford F100 pickup truck.

“We don’t have a whole lot of time to spend on it right now,” Boothe said, “but I only work on it when she can be with me.”

“I want to do everything I’ve dreamed of,” Sawyer said. “I want to work on Harleys and eighteen-wheelers too. I’m willing to bust my tail to get to where I want to be.”

Sawyer said the advice she has for other girls who may feel intimidated to head into a male-dominated classroom is to continue to pursue the passion that drives them.

“Not to be cliche, but girls can pretty much do anything they want to do. Just because it’s something normally only boys do doesn’t mean that you can’t do it too if you are interested in it.”

Her grandfather’s admiration for his granddaughter seems to add gravity to her belief in herself.

“Once Lauren sets her mind to something, she wants to see it finished,” he said.