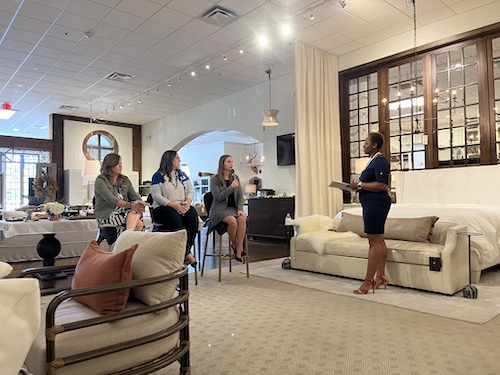 Samantha Nesbitt said. “Shelby County is our second largest county next to Jefferson so we

have a separate campaign kickoff in Shelby County each year.”

The program provides support, resources and guidance in four key areas: health, education, financial stability and access to services according to the United Way of Central Alabama’s website.

There are several organizations, charities and nonprofits that United Way of Central Alabama works with in order to give back to the community.

“We were able to bring in several nonprofits in the area who serve Shelby County,” Divisional Chair Director Delpha Bartley-Jones said. “I thought it went very well. It really reiterated the mission of United Way and some of the challenges that we have seen across Alabama.”

Jones said there is a lot of need for organizations like United Way to reach out to those in need and was inspired by the community’s response to the Shelby County campaign kickoff.

“The need has gone up a lot,” Jones said. “Meals, food insecurity, mental health and financial stability are all big needs. I think the community really embraced the kickoff and understands what is at stake.”

Jones said that United Way of Central Alabama will continue to serve the area and is excited for the future.

“The plan is for us to continue to meet with the organizations in Shelby County to fundraise so we can continue to support our partners in the community,” Jones said. “If you think about it, it touches someone we know. It might not be us directly, but it could be someone we work with, it could be a family member. I think we all have an obligation to work together and to give back.

“I am excited about it and over the next few months, I am looking forward to the direction that it is going to go as far as how we do as a county.”

“The demand for service is much higher,” Jones said. “We need to meet people where they are regardless of what they might look like in terms of contribution, it is all about meeting the needs of the community that we serve.”

Jones encourages anyone to become involved in United Way of Central Alabama and answer the call to action.

“I think we all know people who have benefitted or can benefit from United Way,” Jones said. “Let’s talk about what you can do. In every way that we can contribute and in every way we give back, that does make a difference. Realize where the needs are and what challenges there are and focus on doing what you can. It is intended for togetherness. Together we can go so much further. Making that a focus, to be proud of the communities we are in, it is impacting people.”

More information about United Way of Central Alabama can be found at Uwca.org.