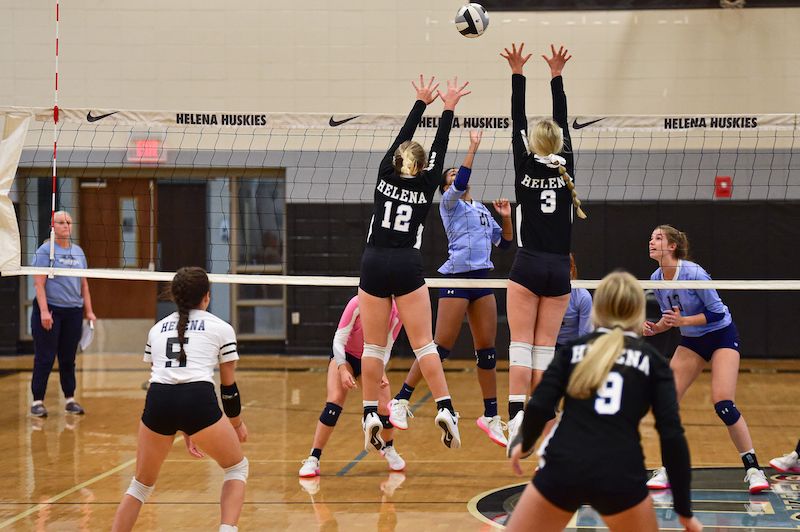 Helena beats Briarwood on Tuesday, Sept. 27, 3-1. (For the Reporter/Jeremy Raines)

NORTH SHELBY – Briarwood fought a strong match against Helena in a four-set match at home on Tuesday, Sept. 27. Despite the Lion’s best efforts, the Huskies swept the Lions 3-1.

The Lions started the first set strong, holding a lead against the Huskies 21-18. However, Helena managed to make a huge comeback within the first set tieing Briarwood 21-21. The Huskies continued to tie Briarwood until they came out victoriously 27-25.

Briarwood came back strong into the second match. The Lions held a lead for the entire set by a minimum of four points. The set concluded with the Lions defeating the Huskies 25-20.

Helena’s Presley Lively and Katie Gutierrez both served two aces each. Olivia Johnigan and Haylie Deifenderfer trailed behind Lively and Gutierrez serving one ace each.

Addison Dockery led the Huskies with the highest number of kills in the match against Briarwood. Dockery made 13 kills and Allie Graydon totaled 12 kills.

Lively and Graydon both led the Huskies with 19 digs for the evening. Dockery had 17 digs and Kylie Scoles totaled 16 digs.

Helena and Briarwood both play their next match on Thursday, Sept. 29. Helena travels to Pelham next to take on the Panthers and Briarwood will face up against Clay-Chalkville.