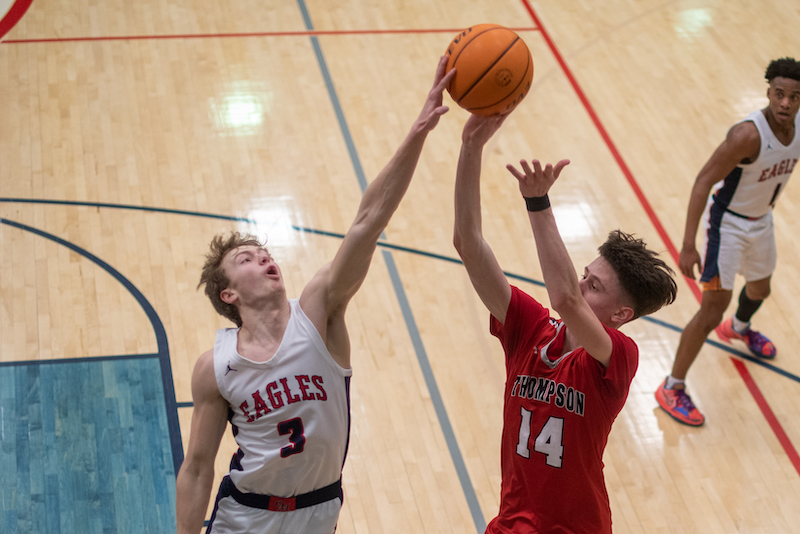 A new tournament is entering the 205 and Spain Park, Oak Mountain and Thompson are among the schools selected to represent the Magic City. (File)

Knight Eady hosted a media day for the 256 versus 205 on Wednesday, Sept. 21. Spain Park, Oak Mountain and Thompson were present among the eight schools participating in the tournament that is set to begin on Jan. 16. The teams were eager to discuss their excitement for the inaugural tournament against Huntsville schools and their preparation for their overall season.

Oak Mountain will be the first school out of the three to play the event and the only Shelby County school to have homecourt advantage. The Eagles will host Grissom in North Shelby on Jan. 16. Oak Mountain went 6-2 in its region last season and 25-6 overall.

The Eagles have found themselves a new coach to start the 2022-23 season off. Former Pelham head coach and former assistant Spain Park coach, Joel Floyd has found a new home “across the street” with Oak Mountain.

“It’s always fun to play at home, especially in a special event like this,” Floyd said about Oak Mountain hosting the event in North Shelby. ” Our student’s section is known as one of the best in the state, the Goon Squad brings it every night. I remember the old days when I was at Pelham, we used to have some really good battles, and it would be rocking in there. I can’t wait to get those guys excited and ready to go for a big event.”

Spain Park is set to travel to Hunstville to face up against James Clemens in the second to last game of the 256 versus 205 tournaments. The Jaguars finished the 2021-22 season 6-2 in their region and 28-8 overall.

Returning head coach, Chris Laatsch expressed his eagerness for the return of basketball season for Spain Park. The Jaguars closed their previous season with a loss to Enterprise in the playoffs, a fresh wound for Laatsch and his players.

“The coaches always hold us to a certain standard of practice we’re always trying to get after, it makes each other better and makes ourselves better,” said senior Zach Gray about how the team is preparing for their fastly approaching season. “I think we’re just going to take it game by game you know, every game is a blessing with injuries and COVID still being a thing. We’re not gonna take the game or practice for granted.”

Oak Mountain isn’t the only school out of the three participating in the event to get a new head coach. Former assistant coach DJ Black, was announced head coach for Thompson earlier this year.

Oak Mountain, Spain Park and Thompson are all set to play their first game of the season in November.