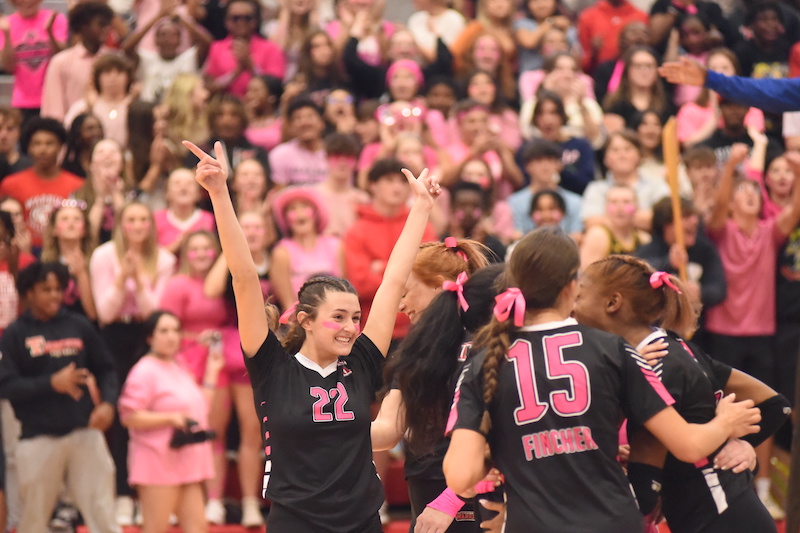 Student-athletes dedicate more than their time to a game, they dedicate themselves to remembering people who support them and they support. (Reporter Photo/Lauren Sexton)

The title of this column might sound a little misleading because it could easily be implied that I am going to discuss the dedication that these student-athletes have in Shelby County. This is not going to be one of those kinds of columns, I already did that. In the short time that I have spent covering the athletic programs here, I’ve noticed so many things that make the athletic program so special in this county. One, in particular, is how many programs and athletes dedicated their season and or games to people and causes that have affected them deeply.

Thompson’s Warrior arena was covered in pink on Thursday, Sept. 29 instead of their signature red. After speaking with Thompson head coach Judy Green, she discussed how the volleyball team began a tradition of dedicating one of the home games in the month of October to breast cancer awareness. Green expressed how this is something common that dedicating games to create awareness for breast cancer in the month of October in the volleyball community across the country. This was a special event for Green and her team because almost everyone has been affected by breast cancer in some shape or form.

In the month of September, Spain Park’s volleyball team hosted a weekend-long tournament to honor former Berry Middle School volleyball and basketball coach Erin Heffner. Heffner was a physical educator, a former University of Alabama volleyball player and 2004 SEC West champion. Heffner died in 2014 after battling cancer. For the past six years, the volleyball community in Birmingham has participated consistently in this event. The tournament has grown so much in such a short time, the event was held at the Finely Center to hold the 30 teams that played. As the volleyball community continues to play in the tournament, Heffner’s legacy will continue to be remembered

Thompson lost their sideline staple, Frankie Crim, a sideline photographer and Thompson graduate died shortly before the first kick-off of the 2022 season. An incredibly devastating loss for both Thompson and everyone who knew Crim. The Warriors made sure this season that Crim’s memory would be there with them, the Warriors added the letters FC to their helmets, Crim’s initials. Her dedication to her alma mater impacted Thompson so deeply that the Warriors made it a priority to make sure that they dedicated every game to Crim with just the initials of their helmets.

Dedication goes so far beyond the time and effort student-athletes put into their sport. There are so many people that have helped them throughout their journey from family and friends to coaches and to sideline photographers.  Athletes dedicate their games and their seasons to those who got them to where they are today. Teams have been doing this for dedication, sports wouldn’t be sports without emotion.