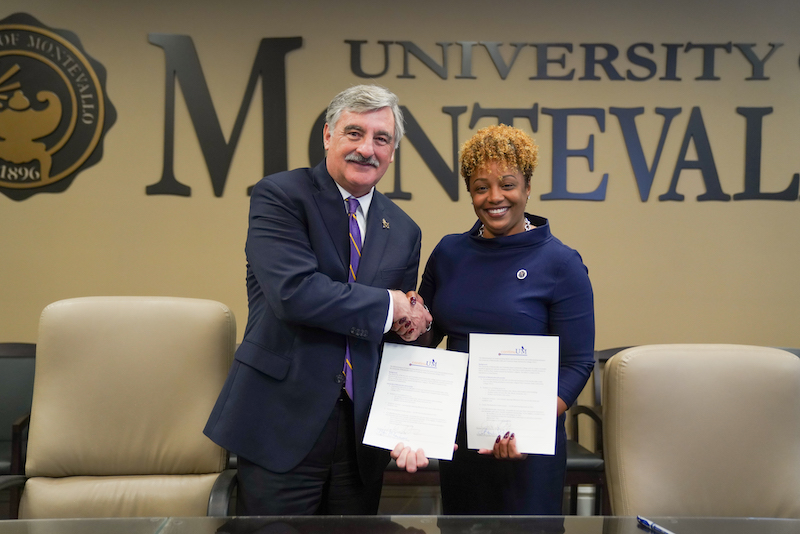 “It’s great to have a new partnership with Trenholm State,” Dr. John W. Stewart III, president of UM, said. “We’re all in the same enterprise together and we’re all about our students’ success. Paving a smoother path for Trenholm State graduates to finish their education at Montevallo is not only the right thing to do, but it was a lot of fun.”

The partnership allows Trenholm students who earn an associate degree or at least 45 transferable credit hours with a minimum cumulative GPA of 2.0, to transfer to UM through the ContinuUM program. While still students at Trenholm, they get a UM student ID, access to the McChesney Student Activity Center, can participate in extracurricular activities and student life events , use UM’s online digital library, receive pre-transfer advising and career advice from the Learning Enrichment Center and Falcon Success Center and possibly a $2,000 Montevallo scholarship, renewable for one year.

“This is monumental for our college,” Dr. Kemba Chambers, interim president of Trenholm, said. “This is our first articulation agreement with the University of Montevallo, so it’s big.

“We love that Montevallo has the M.A.D.E. program that helps minority students, being that we have a high population of students who are minorities,” Chambers continued. “This is a great investment for them and provides another avenue for our students to transfer after they finish at Trenholm, and just go 60 miles up the road to Montevallo.”

Dr. Tammi Dahle, vice president for enrollment and student affairs, said Trenholm reached out to UM about the partnership, which Montevallo was excited about.

“They’re a great school in Montgomery and we want to build those bridges throughout the state so we can bring lots of different students from different cultures to make our campus even more inviting to other students,” she said.