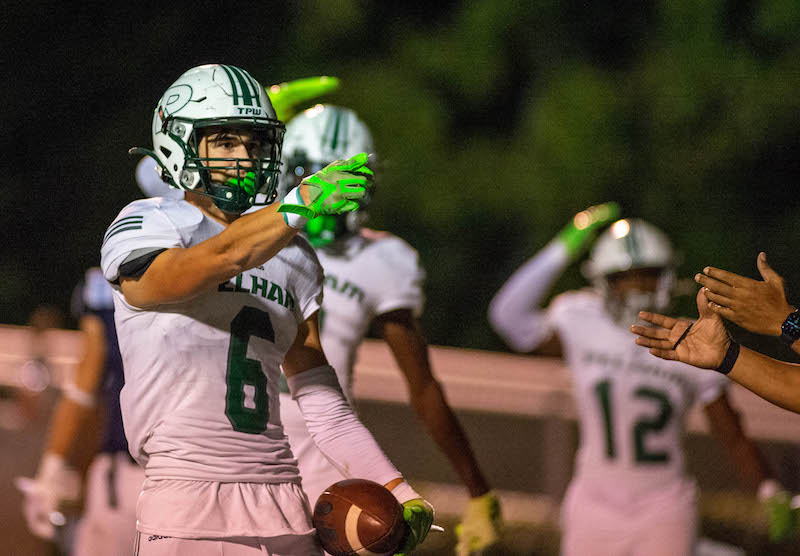 The Pelham Panthers will host Benjamin Russell Thursday night in this week's Game of the Week. (For the Reporter/Neal Wagner)

Time is ticking away on the 2022 football season with four weeks left in the regular season and three weeks of region play remaining, which makes this week an important one for local teams as they continue their battle for the playoffs and region championships.

With so much on the line each week the rest of the way, this week’s slate is no disappointment with two Thursday night battles that could ultimately play a role in the final standings as well as three county matchups and several must-win games.

Pelham vs. Benjamin Russell (Game of the Week Thursday)

Sitting at 3-3 on the season, the Pelham Panthers could very well be 6-0 with three losses by seven points or less and two by four points. The Panthers have won three of four with a 31-24 overtime loss to Helena the only blemish in the last four games, and now, they’ll get one of their biggest games. With region battles against Benjamin Russell, Homewood and Chilton County still left this season, there isn’t an easy one left, but the Panthers know just how big each game is. This week marks the first of that difficult stretch against the Wildcats, who are 5-1 overall and scoring 35.8 points per game and giving up 14.3 points per game. They shut out a good Chilton County team 48-0 last week and have scored 41 or more in three of six 46 and 48 the last two weeks. I think the Pelham’s defense, which is giving up 23.7 points per game, will be enough to keep this one tightly contested, but will it be enough. We’ve seen the offense grow so much from the start of the season as well, and if they show up, it will be enough. No matter what, this is a scrappy and experienced team that has started to learn head coach Mike Vickery’s style in his first season. It’s hard to see them not competing in this one just judging from the season so far. Pelham 21, Benjamin Russell 27

These two teams have gone completely opposite directions since the first two games. Thompson started 0-2 and has won five in a row since, while Oak Mountain started 2-0 and has lost five in a row. The main area of focus is Thompson’s defense against a struggling Oak Mountain offense. The Warriors have given up 14 or less true defensive points in every game this season, while the Eagles have scored 23 or less in all but one game, 31 or less in every game and 14 or less in four of the last five. The Oak Mountain defense will have to have a stellar game against a Thompson offense that has been inconsistent, but I’m not sure even that will be enough. As long as the Warriors aren’t looking ahead to the final two games, they should make it six in a row. Thompson 35, Oak Mountain 7

For confidence reasons, this one is big with some key games still left down the stretch for both teams. Chelsea is now 1-6, but the Hornets have lost three games by seven or less and could easily be 4-3 right now. They are, however, coming off one of their worst losses of the season in a 52-10 game against Vestavia Hills. Spain Park is sitting at 1-5 overall, and it’s all been about offensive struggles The Jags, however, put together their best game of the season last week on that side in a 38-28 loss to Tuscaloosa County, but the defense took a step backward. I think this game suits both teams. It should be a game where the two defenses can shine, while the offenses will try to set a physical tone. Both are scoring right around 16 points per game and giving up near 30 points per game, but I think Spain Park’s talented defense may make the difference in a tightly-contested game. Chelsea 20, Spain Park 24

With both of these teams sitting with one region win and time running out on the region schedule, this is a big one. Briarwood still has three region games including this one, but the Lions get Benjamin Russell and Homewood after this, the top two in the region standings. Calera only has one region game left after this one and it’s against Helena, who is up there with the other two. With that, both basically have to win this one to give themselves a chance to get into the postseason. Briarwood is coming off a 31-21 loss to Helena last week in a game where the Huskies had a strong fourth quarter to put that one away, while the Eagles fell 31-14 to Pelham after several turnovers. Consistency has been the problem for both with Briarwood’s offense looking great at times and cooling off at others and Calera’s defense playing lights out at times and struggling at other times. The Eagles have also flashed some impressive offensive play at times, but took a step back last week with just 14 points. This one is completely up in the air and should be another wild and close game to keep us on pace this season. It just depends on which version of each team shows up. Briarwood 31, Calera 28

Shelby County has now lost two in a row and three of four to fall to 3-3 overall and 1-2 in region play after 48-6 loss to region leader Demopolis last week. The Wildcats will be battling for a playoff spot the next two weeks, and they’ll have the chance to regardless of the outcome in this one, but it’s one they need for momentum. That, however, will be difficult against a Selma team that is 5-2 overall and 2-1 in the region. The Saints have given up 13.1 points per game, and while their offense is only scoring 22 per game, that defensive mark will make the difference against a Shelby County offense scoring just 12.8 points per game. The Wildcats will hang around with their defense, but the offense will have to have a special bounce back to win this one. Shelby County 10, Selma 24

It has been a challenging three weeks for Montevallo with three losses in a row to fall to 2-4 overall and 2-2 in region play. Now, the Bulldogs have one of their most difficult region games of the season against Bibb County. Not what you want coming off a 33-14 loss to Sipsey Valley in a game that the Bulldogs needed to win. Montevallo led that one 14-10 after returning the opening kick to the second half, but ultimately gave up 23 unanswered the rest of the way with the offense continuing to struggle. The Bulldogs are now scoring 16.5 points per game and have scored 14 or less in four of six games this season. Montevallo’s defense has played well, giving up 16.5 points per game, but Bibb County is also playing well defensively, giving up 20 points per game. The Bulldogs may hang around in a defensive battle in the first half, but it’s tough to see them keeping up with an offense scoring 35.9 points per game. Montevallo 13, Bibb County 35

The historic season continued for the Vincent Yellow Jackets on Friday night with a 54-21 win against Ranburne. The Jackets overcame a 21-18 deficit at the half with a 36-0 second half. Now, they get one last game that they’ll have to avoid looking ahead. With two big games after this, the Jackets should easily pull away from Woodland if they stay focused on this week. Woodland started the season 1-5, scoring six or less in the first five games and giving up 31 or more in that span. Last week, they picked up their first win in a 39-26 victory against Central Coosa, who Vincent beat 65-0. The Jackets are scoring 49.4 points per game and giving up 13.7 points per game, while Woodland is scoring nine and giving up 37.2. Expect the Jackets to comfortably pull away, knowing what they have ahead if they do. Vincent 49, Woodland 6

Cornerstone’s 3-0 start has quickly shifted to back-to-back losses due to defensive struggles. The Chargers have given up 50, 48 and 56 in the last three games and are now 3-2 heading into this matchup. The offense, however, has played well, scoring 40 or more the last three weeks. Trinity currently sits at 1-4 on the season, but beat North River 50-8, a team Cornerstone lost to 52-48. Expect the Chargers to play well again offensively, but the defense has to find a way to come into this one with a better game plan. Cornerstone 48, Trinity 43

Coosa Valley finally used its defense to win a game last week. Despite scoring 14 or less for the seventh week in a row, the Rebels were able to pick up a 14-12 win against Evangel Montgomery with a strong defensive effort. This week, however, they get a challenging battle with Crenshaw who is 4-2 on the season and scoring 37.7 points per game, while they’re giving up 28.7 against a challenging schedule. Coosa Valley has scored 6.4 points per game this season and given up 27.3. The defense will allow the Rebels to hang around, but they ultimately won’t score enough. Coosa Valley 13, Crenshaw 28