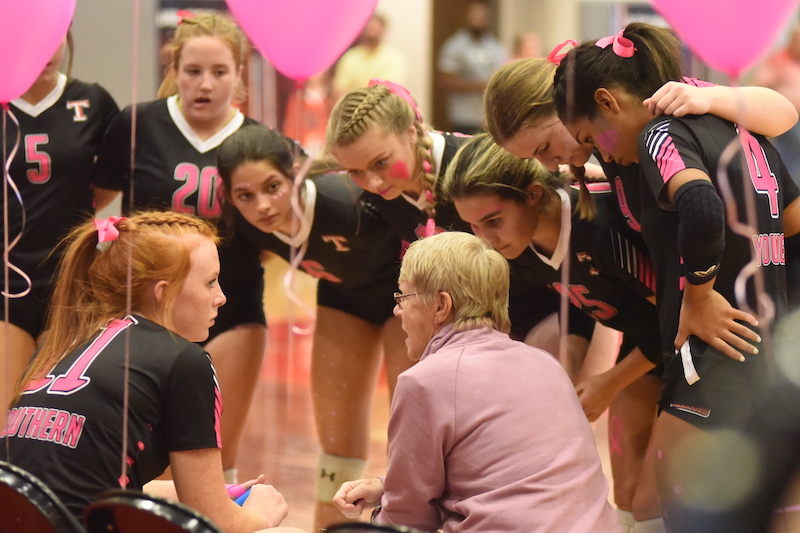 The University of Alabama is honoring women who have paved the way for female college sports. (Reporter photo/Lauren Sexton)

TUSCALOOSA – Hard to believe that it has only been 50 years since Title IX was passed in the 1970s. The University of Alabama is honoring the 50th anniversary of the federal civil rights law that was enacted as part of the Education Amendments of 1972 that prohibits sex-based discrimination in any school that receives funding from the federal government by honoring women who have paved the way in college sports.

The Crimson Tide volleyball team honored former head coach and current Thompson coach Judy Green as one of those women. Each one of the women’s teams at the University of Alabam is commemorating the 50th anniversary by honoring women who paved the way in Tuscaloosa.

“I do feel like that there were women that came before me that I’m gonna call them the pioneers of Title IX for Alabama volleyball,” a very humbled Green said about her being honored. “Stephanie Schleuder and Dorothy Franco-Reed were the ones that truly carried the torch. I think I got the opportunity to come in behind those two amazing women and carry their legacy forward.”

On Sunday, Sept. 25, the University of Alabama honored Green as one of the women who helped pave the way for women in sports. Green, prior to her career as Thompson’s head coach, was the Tide’s coach after coaching at the University of Montevallo.

While serving as head coach in Tuscaloosa, Green’s first recruiting class won the first-ever SEC Western Division title in 2000 and won again in 2004. During her time with the Tide, the team had consecutive NCAA Championship appearances in 2005, 2006 and 2007.

“I think about all of the athletes and the assistant coaches that I got to be around and help build a program,” Green said. “I’m incredibly proud to coach at Alabama, it is a unique and special place. The young women that came there and played, I think they felt the same way that they wouldn’t have wanted to have their career go anywhere else.”

Alongside Green in the Foster Auditorium was her daughter. Aside from her looking for Big Al in the crowd, Green was touched that she got to share this experience with her daughter.

“I coached at Alabama for 15 years and she loves Alabama,” Green said about her daughter being with her during the Alabama match. “To stand out on the floor with her and I do hope It’s something that she will remember. That was a special moment that she and I could share together.”

Green has continued her award-winning career after her time in Tuscaloosa at Thompson High School. Five years after her retirement from the University of Alabama in 2010, Thompson hired Green to serve as their head coach and has served ever since.