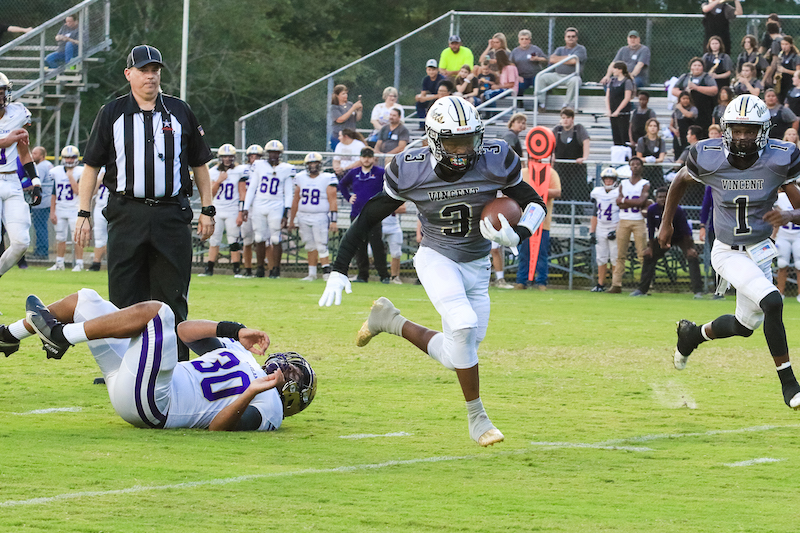 Vincent took another important step toward their postseason goals with a 39-0 win at Woodland on Oct. 7. (File)

WOODLAND – Vincent took another important step toward their postseason goals with a 39-0 win at Woodland on Oct. 7.
The Yellow Jackets are squarely in the mix of the playoff race in Class 2A’s Region 4, improving to 4-1 in region play, trailing only region-unbeaten B.B. Comer and tied with Isabella, which visits Vincent on Oct. 14.

VHS also hosts Thorsby (3-2 in region play) on Oct. 21, so the next two games will be crucial in determining the Yellow Jackets’ fate.
“I’m proud of our guys for handling their business the last three weeks, but we are going to have to execute better to finish the way we want to,” Coach Lucas Weatherford said. “Isabella has a very good football team coming to our place next week, and we are going to have to play extremely well to have a chance to win.”

On Friday, Vincent (7-1 overall) took the lead for good on its first possession of the game, a four-play drive that ended with a 21-yard touchdown pass from Blake Allums to Tray Youngblood, who also ran in the 2-point conversion attempt for an 8-0 lead.
On the ensuing possession, Youngblood intercepted a Woodland (1-6 overall, 1-4 in region play) pass and returned it 70 yards for another touchdown.

Then, it was Casen Fields scoring on a 10-yard touchdown run for a 20-0 lead after the point-after attempt was not good.
Still in the first quarter, Allums found Youngblood for a 44-yard touchdown pass. Gavin Kratz’s extra point made it 27-0 going into the second quarter.
The next frame saw more of the same, as Allums led a seven-play drive that included a 17-yard completion to Mattson Davis and a 12-yard completion to Nolan Kratz.

The score came on a 9-yard touchdown pass to RyKelus Robertson, making the tally 33-0. With reserves seeing playing time and the clock running in the second half, Jayden Roberts scored on a 43-yard touchdown run in the third quarter to close out the scoring.