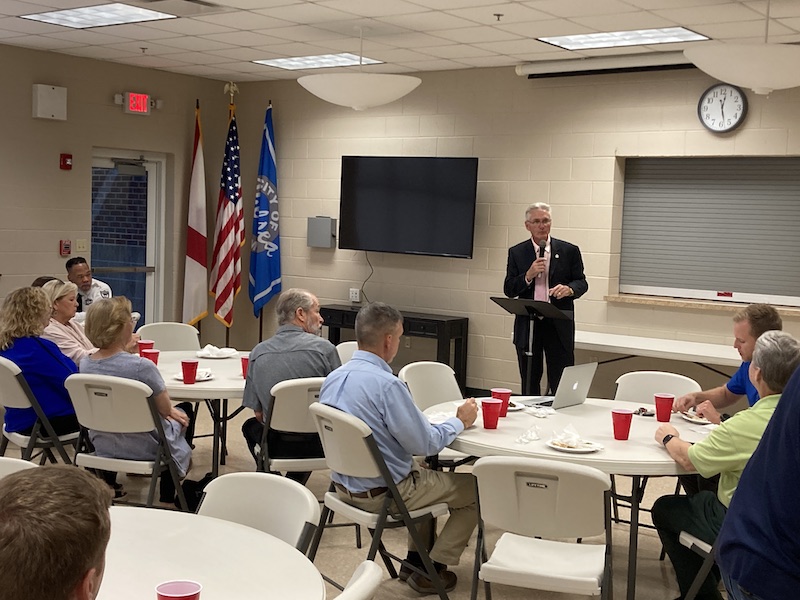 The Chelsea Business Alliance met at the Chelsea Community Center for a luncheon and to hear a report from Mayor Tony Picklesimer on the state of the city of Chelsea. (Reporter Photo/Noah Wortham)

CHELSEA – The mayor of Chelsea provided an update on the state of the city of Chelsea at a Chelsea Business Alliance meeting on Wednesday, Oct. 5.

The CBA met at the Chelsea Community Center at 11:30 a.m. for a luncheon and to hear the report from Mayor Tony Picklesimer.

“Thank you to the Chamber and the Chelsea Business Alliance for hosting today’s meeting. We have lots of dignitaries and elected officials here,” Picklesimer said. “You will hear in my remarks how much we rely on and depend on Shelby County to accomplish what we accomplish here in Chelsea, and we’re very grateful for all that.”

Picklesimer continued his address by giving a general overview of the state of the city.

“The state of our city of Chelsea is still very good,” he said. “We’ve had an excellent calendar 2022 on many fronts, and we’re pleased to see the amount of growth that we’re seeing still in our city. We continue to see a very strong housing market, although there is some indication that (there) may be a little bit of slowing because of interest rates (and things) such as that, but the indicators for 2023 remain very strong.”

Picklesimer shared some news on the city’s housing market.

“Chelsea Park continues to grow and expand, and there should be homes in two new subdivisions during this fiscal year that just started in October,” he said. “I feel like it’s a good place to be. Chelsea has been one of the hottest areas of Shelby County over a number of years now, and so we take a lot of pride in that, but we also take and feel a lot of responsibility in that. We need to continue to grow our city. We need to continue to offer amenities that make people want to come.”

He shared news on the growth of Chelsea from a commercial standpoint.

“On the commercial side, I’m excited to announce the completion of the Foothills Business Park,” Picklesimer said. You may have seen some earthmoving going on up there. The park is a city-owned development created with the goal of bringing jobs to our city.”

Picklesimer said he saw the need to raise the daytime population of the city, and that the best way to do so would be to increase the number of people who not only live in Chelsea, but work in Chelsea.

“Education partnership with our schools will continue to be a focus for this administration,” he said. “We will continue to focus this year on ways to partner with and help to improve the Shelby County Schools that serve our city.”

He also shared the success of the Nick Grant Program which helps provide funds to teachers and administration.

“The Nick Grant program has been a huge success,” Picklesimer said. “We’re already well over a million dollars in grants for our schools. This money is designated to improve the classroom experience, but is spilled over some and we’re able to do some other things.”

He explained that they use some of the Nick Grant money for things such as band instruments, special furniture for special needs classrooms and different things that they do for the athletic programs in the schools.

He ended his discussion of the school system by mentioning the property tax that was voted on earlier this year.

“Our citizens voted overwhelmingly against this new property tax, and with this now completed, we as a council will turn our attention back to trying to work with the Shelby County Board of Education, and partner in every way we can to help make some much needed improvements to our facilities that we have,” Picklesimer said.

Picklesimer shared an update on the city of Chelsea’s fire department. He announced that there are three new fire engines on order and a transport coming. They should arrive in the coming months, he said.

“Chelsea is one of the few cities in Shelby County that actually offers transport,” Picklesimer said. “I don’t know if you realize the cities along the I-65 corridor, their fire rescue departments don’t have transport, and so they’re at the mercy of outside companies to provide their transport.”

Picklesimer shared that things are underway for phase two at the Chelsea sports complex on Highway 11. This will provide four new baseball fields, including a championship field, that will be operational in the spring season of baseball in 2023 and will be completed in the summer.

“I’m happy to announce that we had our pre-construction meeting yesterday to begin construction of a second gymnasium here on the back of this building,” he said. “Construction will start on that very soon. There’ll be another full-size gymnasium. A locker in-between the two facilities, and also a couple of racquetball courts.”

According to Picklesimer, the addition of a second gymnasium is a $3.6 million-dollar project and should be completed by the end of calendar 2023.

“Our ‘All about family’ slogan remains just as important to us today as it was just 26 years ago when the city of Chelsea was formed,” he said. “Our fire department is about 70 strong now, we have three excellent Shelby County deputies patrolling our city all the time around the clock, and there are cities and communities around us that don’t even have one and we have three.”

Picklesimer then concluded his address to CBA.