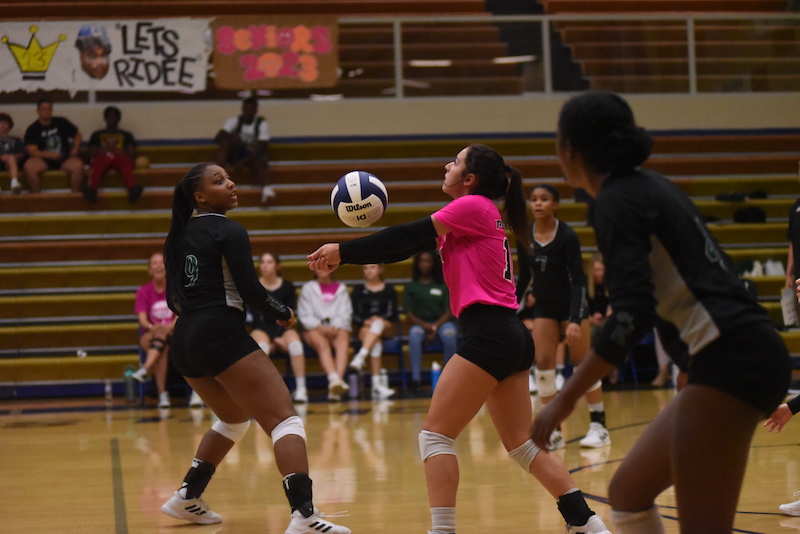 GULF SHORES – Weekend matches started early for Pelham as the Panthers traveled to the Gulf Shores to compete in a tri-match with Gulf Shores and Saraland and competed in the Shrimpfest Tournament.

In the Panther’s first match against the Gulf Shores Dolphins on Thursday, Oct. 6, Pelham defeated the Dolphins 2-1. The match started with an incredibly close first set between the two schools, however, Pelham managed to squeeze in a win after beating Gulf Shores with a two-point lead. The Panthers won 26-24.

The Dolphins did not make the second match of the three-set match easy for Pelham. Despite the Panther’s best efforts, they fell 11 points shy of Golf Shores, losing 25-14.

Now 1-1, Pelham returned to the third and final set of the match stronger with a nine-point lead over the Dolphins. The Panthers finished the final set of their first match of the evening 15-6 and won the match 2-1.

Team leaders for the Panthers in the match against Gulf Shores were Camryn Mcminn with 18 kills, Londyn Wynn and Averi Smith both served two aces each, Kylee Hester totaled 15 digs and 33 assists, and Emma Studdard had 20 receptions.

Pelham faced Buckhorn as their second opponent in their Thursday night tri-match. The final match of the evening ended with the Panthers winning the two-set match 2-0.

In the first set out of the two, Pelham won with an 11-point lead over the Saraland Spartans 25-14. The Panthers concluded the final set of their match, winning 25-20 before taking on the Spartans again in the Shrimpfest tournament over the weekend.

Pelham faced the Spartans again in one of their matches in the Shrimpfest tournament on Friday, Oct. 7. The Panthers won 2-0 against Saraland, starting the tournament on a high note by winning the first set 25-20 and 25-17.

Team leaders in the match against the Spartans on Friday were Wynn with seven kills, Mcminn and Smith serving three aces each, Smith totaling 16 digs and 10 receptions, and Hester had 14 assists.

The Panthers concluded their first night in the Shrimpfest tournament with a 2-0 win against Alabama Christian Academy. Pelham won the first set 25-17 and the second set 25-16.

The Panther had serval strong performances in the match against Montgomery Academy by Mcminn and Smith having both totaled six kills and nine digs each, Bethers served three aces, Hester totaled 17 assists, and Smith led with 17 receptions.

Pelham lost to Enterprise in their second match on the second day of the tournament. The Panthers lost 2-1 in the three-set match. Pelham started the first set strong with a four-point lead winning 25-21 against the Wildcats. The Panthers, unfortunately, fell short in the final two sets of the match 25-17 and 16-14.

Team leaders for Pelham included Mcminn with 12 kills and eight digs, Brenna Vickery, Mcminn, Hester, and Wynn all served one ace each, Hester had 22 assists, and Smith totaled 19 receptions.

The Shrimpfest concluded for the Panthers in a final match against Mobile Christian Leopard in a two-set match. Despite Pelham’s best efforts, the Leopards defeated the Panthers 2-0. Pelham lost in a close first set 26-24 and 25-20 in the second set.

The Panthers were led by Wynn with nine kills and two aces, Brenna Vickery totaled 10 digs, Hester had 20 assists, and Smith totaled 14 receptions.