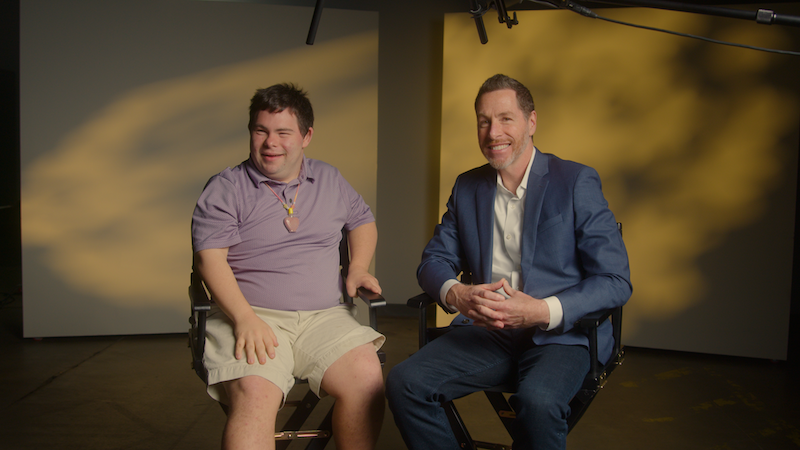 “Made with Love” follows the story of a young man with Down syndrome and the story he has to tell the world. (Contributed)

PELHAM – Pelham’s David Hughens seeks to tell a powerful story through his film “Made with Love” which follows and stars a young man with Down syndrome named Jay Carr.

Hughens said he has always had a passion for film and telling stories that he feels God has called him to share. The film is entirely crowd funded, and any donations will be going into telling Carr’s story.

“I had to make the decision on how I was going to raise the funds,” Hughens said. “Our first round, we are raising $50,000 as our test market. It is going to be made with love, it is people donating to it. It isn’t through me, it’s through God.”

“So many doors have opened up, I know I’m doing the right thing,” Hughens said. “I met Jay about seven years ago, and just fell in love with him. He has changed my life.”

Being in movies has been a lifelong dream of Carr, and those dreams are now coming true.

“He knew I was into film making,” Hughens said. “He kept saying, ‘I want to be a movie star,’ and the idea came for “Made with Love,” and there is a lot of inspiration from Jay and his life. Jay has been the inspiration.”

Hughens looks forward to the ripple effect that Carr’s story will have on other people.

Hughens said he drew a lot of love and inspiration from Carr.

“Jay is just always loving,” he said. “I would go over, and Jay loves to color, and he would always ask me to color. Having worked at a school and being a kid at heart, I always loved to get down on the floor with the kids and color, and when an adult does that, it is this level of respect you’re showing them, and that is the same thing I did with Jay. The simplicity in it, the love in it, we just developed a really strong bond.”

Hughens said he feels there is a lot to be learned from Carr.

“I just learned so much from him,” he said. “Now that I’ve gotten into this film and all the research I’ve done for this film, the things that I learned totally reiterate all that. Fifteen percent of adults in the U.S. claim to be happy with their lives, compare that to 99 percent of individuals with Down syndrome. We need to give the world a lot more of that.”

Hughens hopes to share Carr’s joy and kindness with the world.

“I feel like the world is being robbed of some of the most beautiful individuals,” Hughens said. “We need them.”

Hughens said he was originally sort of shocked by the overwhelmingly positive reaction, but now has learned to trust that God will make his story known.

“It was shocking,” he said. “But now I have to give a little more respect to God and say I am expecting this to happen.”

Hughens hopes to see the Shelby County community rally around him with support.

More information can be found on how to donate for the “Made with Love” project at Madewithlovethemovie.com.