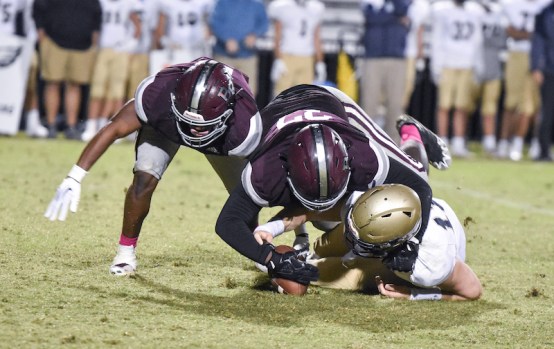 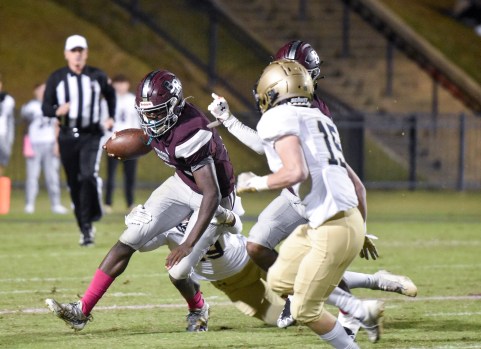 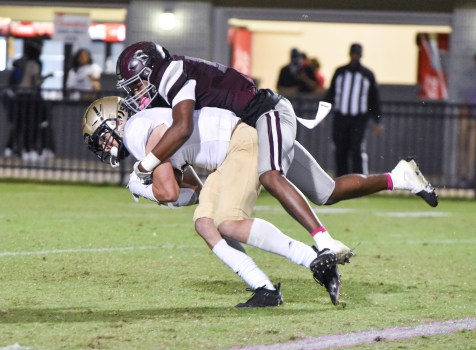 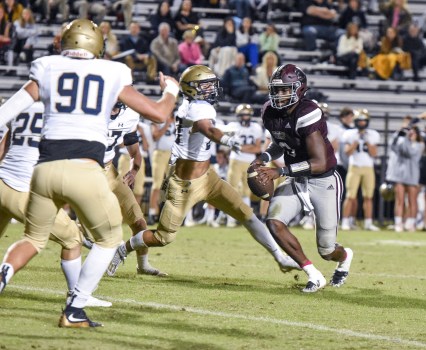 By LIZI ARBOGAST | Special to the reporter

ALEXANDER CITY — With only 2 ½ minutes left in Friday’s Class 6A Region 3 game, Briarwood Christian scored a short field goal to take a four-point lead over Benjamin Russell, and some of the wind seemed to come out of the lively home crowd’s sails.

But it wasn’t long before the Wildcats gave something to cheer about — and they stayed cheering for the remainder of BRHS’ 16-14 victory.

Ty Williams, who had been an absolute standout for the Wildcat defense, grabbed the ensuing kickoff at the 28-yard line. He juked up the right side and it looked like he was going to be quickly brought down, but after breaking a pair of tackles, he moved to the left and was off to the races. He scored a 72-yard kickoff return, but that wasn’t all she wrote for Benjamin Russell.

Briarwood Christian wasn’t about to go down without a fight and in its final drive, the Lions eventually faced a third-and-22. But Williams wasn’t going to let it happen; he jumped up and had a beautifully played pass breakup.

“He played a great game tonight,” BRHS coach Smitty Grider said. “We played all week to get our kickoff return to the field, and we thought we had one earlier in the game. But that was huge — it was the game-winner. He’s a senior and he’s playing his best game at the right time.”

The Lions failed to convert the fourth down, and the game was complete.

Enter the Gatorade bath for Grider, who, during his first year, officially has led the Wildcats to the playoffs for the first time since 2018.

“None of these kids have ever been in the playoffs,” Grider said. “Our seniors were in the 8th grade last time, so learning how to handle this and how to get here has been challenging. We played poorly last week with a chance to get in, but we came back strong. We didn’t play our best game, but the defense played lights out and we found a way to get a win.”

Williams was one of those defense standouts as well. He matched Chris Wyckoff with a pair of interceptions. Williams’ first pick came in the end zone to hold off an initial Briarwood threat on the first possession of the game.

The entire first half was riddled with turnovers, and both teams played a bit sloppy and kept getting flags against them. It was a scoreless first half, and it actually took until the very end of the third quarter for someone to finally score.

Briarwood Christian quarterback John Paul Harbor shot a perfectly placed pass down the left side to Cooper Higgins, who has just two steps from the end zone and made his way in for a 16-yard touchdown.

From there, it was like the flood gates opened. Benjamin Russell scored on its first play of the next possession when Gabe Benton found Corri Milliner heading down the right sideline. Milliner made a well-placed juke inside with about 20 yards to go and eventually scored for a 69-yard receiving touchdown.

Benjamin Russell’s only other score came from the foot of Noah Alsobrook, who sailed in a field goal from 31 yards out.
“The big adjustment (in the second half) was really to just quit making mistakes,” Grider said. “We had a bunch of bad snaps early on. We knew we could run the football on them and we decided to really focus on the running game the second half. But we had several times where we could get behind the chains with a bad snap or something small, and that’s something we have to work on next week. We gotta correct that and move forward.”