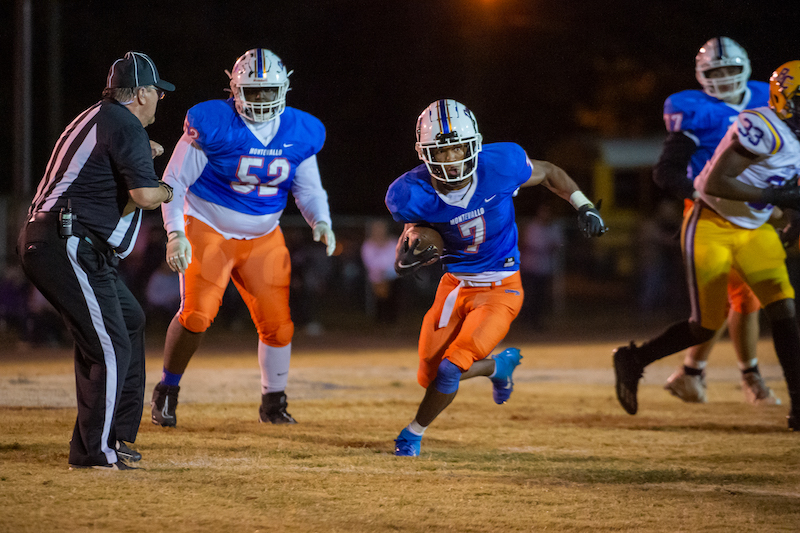 Montevallo put together its most complete game of the season on Friday, Oct. 14 in a 42-0 win over Holt. (File)

TUSCALOOSA – The Montevallo Bulldogs snapped a four-game win streak in a big way on Friday, Oct. 14 and kept their playoff hopes alive in the process thanks to a dominant win on the road.

Taking on the Holt Ironmen, Montevallo capitalized on 42 first-half points to easily pick up their second shutout of the season in a 42-0 victory to improve to 3-5 on the year.

Two minutes later, they made up for the missed PAT when Martin added his second rushing touchdown of the quarter, this time from 5 yards out. Following the score, Jaydien Rutledge added the 2-point conversion to make it 14-0.

That was the start of an explosive quarter for the Bulldogs, as they added two more scores the rest of the frame, including another big touchdown two minutes later.

This time, with Holt driving, it was a 98-yard interception returned for a touchdown from Javon Rogers that made it 21-0 with 4:17 to play in the period.

Montevallo then added its fourth score of the opening quarter when Christian Tolbert carried the ball in from 6 yards out on the team’s next drive.

That put the Bulldogs on top 28-0 at the end of the opening quarter, but they still weren’t done.

Early in the second quarter, quarterback Braxton King added a touchdown pass to Rogers from 45 yards out to make it 35-0.

Then, Kam Goins added the sixth and final score of the half and game by going 21 yards with 4:33 left in the period to ultimately give the Bulldogs a 42-0 lead at the break.

That was more than enough for a defense that has played well most of the season.

Rogers totaled 70 yards and a touchdown receiving on two catches, while Rutledge added 31 yards on one catch.

Defensively, Rogers led the way with his pick six and two tackles, while Spencer Adams and Nylan Goode both had fumble recoveries. Charlie Adams led the team with five tackles. Kemp Swords added four tackles and an interception.