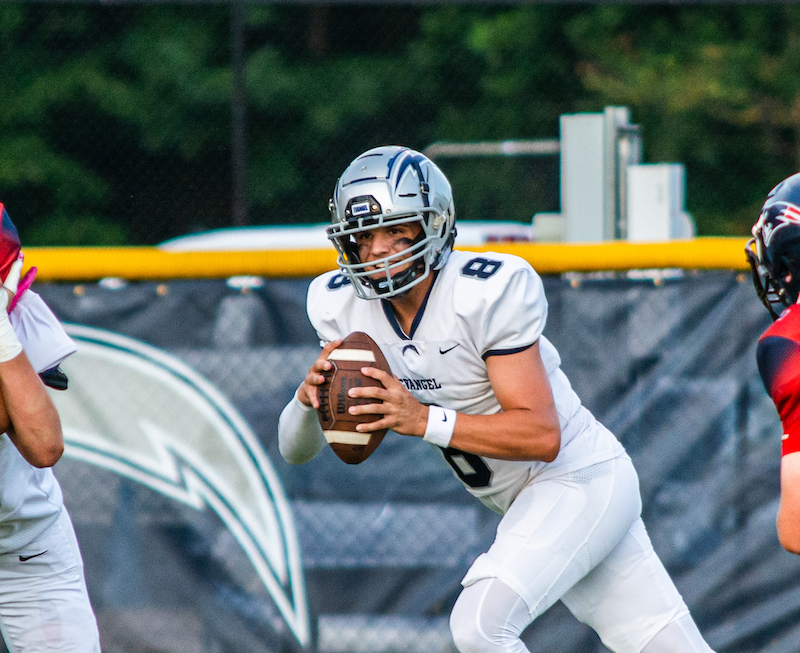 By STEPHEN DAWKIN | Special to the reporter

ALABASTER – Visiting Southern Christian scored on the first play of the game to put Evangel in a hole for only the third time all season, but ultimately the Lightning had little trouble in a 54-7 win on Friday.

With the win, Evangel improves to 8-0 and has locked up the top seed for the playoffs, meaning the Lightning will host a first-round game, and if they win, will host the state championship game.

“We played really well tonight,” Coach Tim Smith said. “I was really happy for our seniors. It was Senior Night and Homecoming all rolled into one. It was a big night.”

The connection worked all night, as Whitfield threw five touchdown passes—all to Thompson.

Before the first quarter came to a close, Whitfield scored again, this time on a 14-yard run.

The second quarter was all Lightning. First it was a 21-yard pass from Whitfield to Thompson, and then a 19-yard touchdown pass for the same pair.

Whitfield then scored on a 32-yard touchdown run, and the Lightning recorded a safety.

First-half scoring concluded with a 39-yard touchdown pass from, you guessed it, Whitfield to Thompson.

The only score of the second half was an 8-yard touchdown run by Whitfield.

Whitfield completed 14 passes in 19 attempts for 153 yards, 97 of which went to Thompson.

Montevallo knocks down win against Calera