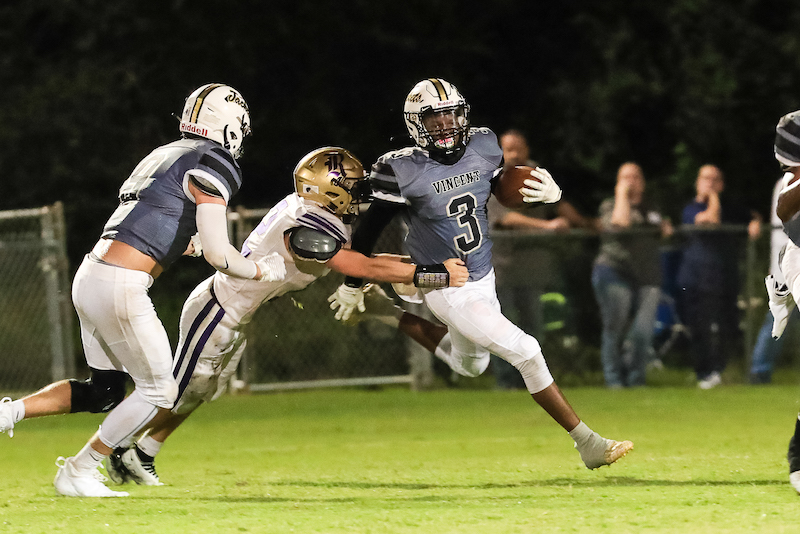 By STEPHEN DAWKINS | Special to the reporter

VINCENT – Vincent took one more step toward homefield advantage in the first round of the playoffs with a 49-42 win over Isabella on Friday.

The Yellow Jackets need one more win, against Thorsby on Oct. 21, to lock up the No. 2 seed in Class 2A, Region 4. The top two seeds in each region host in the first round of the playoffs. A loss to Thorsby could drop Vincent as low as the fourth seed.

The Vincent defense got a stop on the first possession of the game, and it took RyKelus Robertson only one play to sprint 65 yards for the first points of the game. Ty’Qun Goodman was good on the extra point for a 7-0 lead for the hosts.

Isabella (6-2 overall, 4-2 in region play) answered with a long drive that was kept alive by a pass from Eli Kendrick to Drevon Lee that converted a fourth down attempt with 15 yards to go. The Mustangs tied it at 7-7, which was the score at the end of the first quarter.

An empty possession for the Yellow Jackets (8-1, 5-1) gave the ball back to the visitors, but then Tray Youngblood intercepted an Isabella pass.

Robertson capitalized on the extra possession, finding the end zone from 27 yards out to make it 14-7 after Goodman’s point-after.

Isabella’s Zac Chapman ran it in for a score with about 2:30 remaining in the first half to knot the score again at 14-all.

But then Vincent quarterback Blake Allums engineered the 2-minute offense with completions of 15, 12 and 35 yards to set up the Jackets with first-and-goal.

Aiden Poe plowed in from one yard out, and the score was 21-14 in favor of VHS at halftime.

On the second play of the second half, Allums found Zac Carlisle for a 61-yard touchdown pass to bring the score to 28-14 after the extra point.

Then it was the Vincent defense’s turn to make another play. A sack of Isabella’s quarterback turned into a scoop-and-score for Easton Fields that stretched the lead to 35-14 early in the third quarter.

The Mustangs would not go quietly, however. Chapman scored again to cut the deficit to 35-21.

A 7-yard touchdown pass from Allums to Carlisle made it 41-21, but Isabella scored again before time ran out in the third quarter, and the score stood at 41-28 going into the fourth frame.

An interception by Ray Albright gave Vincent the ball at Isabella’s 9-yard line, but with the Yellow Jackets sniffing a touchdown that might have put the game away, an interception gave the visitors hope.

The Mustangs drove down the field, thanks in part to a fourth-and-9 play where Kendrick scrambled from the pocket and found a receiver behind the VHS defense for a long gainer. A touchdown soon after made it a one-possession game, 41-35.

But that’s when Casen Fields returned the ensuing kickoff about 65 yards for a touchdown, and Robertson added a 2-point conversion to bring the score to 49-35.

With the Yellow Jackets in possession of the ball and trying to run some time off the clock, a low snap on a punt gave Isabella the ball in Vincent territory, and a touchdown made it 49-42 with about a minute and a half left to play.

Vincent recovered the ensuing onside kick to put the game away.