Thompson, Hoover set for another showdown to determine region champion 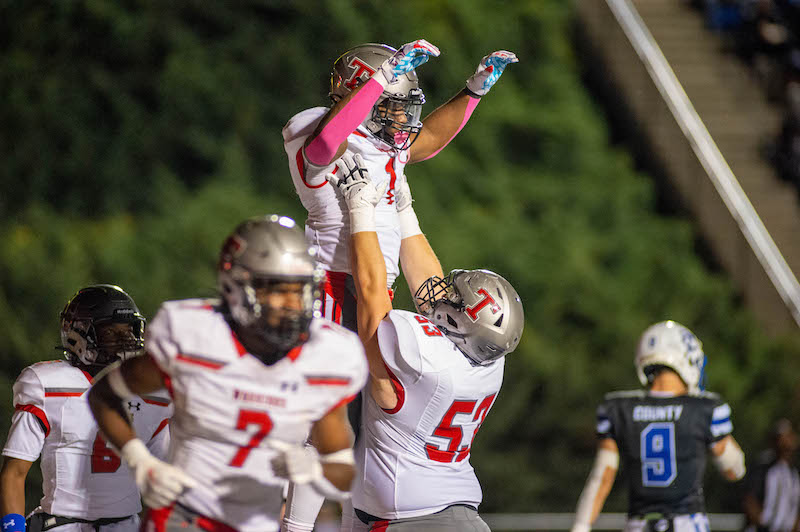 For the sixth year in a row, the Thompson Warriors and Hoover Buccaneers will meet for the Class 7A, Region 3 Championship in what has become one of the best rivalry games in all of high school football.

During the previous five games, Thompson has won three region titles, while Hoover has won two, including a 24-21 thriller a season ago.

The two have also met in the semifinals of the 7A playoffs each year of that span, while the Warriors have won three consecutive championships and played for the last four.

This season, the matchup is intriguing because rather than two offenses averaging 40-plus points per game, the defenses are the clear highlight entering the game.

And both enter on fire.

Hoover lost its opener 17-14 to Auburn but has reeled off eight in a row since then, while Thompson lost its first two games of the season in two nationally-ranked games and has since won seven in a row.

At that point, the question becomes about which offense can ultimately make plays against the opposing defense.

That’s a much more difficult question to figure out.

Both teams have had their share of ups and downs this season and sit in an almost identical situation entering this matchup with Hoover averaging 29.6 points per game and Thompson 29.9 points per game.

In their toughest games of the season, Hoover has been held to 17 or less, while the Bucs scored 26 or less against Mountain Brook, Hewitt-Trussville, Vestavia, Spain Park and Auburn.

Thompson has scored 17 or less against its toughest opponents as well, but the Warriors have scored 51 and 49 each of the last two weeks to seemingly gain confidence on that side along with the defense scoring touchdowns as well.

I’m still not 100 percent sure of who they want to be the starting quarterback with eighth grader Trent Seaborn showing a lot of positive signs and Zach Sims a true team leader and still just a junior. I still think they need to lean into that and use both in different ways to help this offense reach its full potential.

Regardless, this will arguably be the toughest test for the offense since the first two weeks of the season, but they’ve shown they can do just enough against Clay-Chalkville and Hewitt-Trussville to win games, and those are two very good defensive football teams.

Last year, I picked Thompson to win this game and Hoover pinned that all over their locker room leading up to the game. The Bucs went on to win and made sure it was known that was motivation.

This season, Thompson will have to live with that reality yet again. Honestly though, that’s not something that should determine who plays harder in this game. My prediction means nothing. The region championship being on the line is the only thing that should matter and the only thing either team should be focused on because these are two talented teams that could easily win this game in what is going to look a lot like last year’s game with the way these defenses are playing.

Ultimately, however, I really like the combination of AJ Green and Michael Dujon. In a defensive and physical battle, those two running backs for the Warriors can really make the difference.

Green may be the most underrated back in the state right now, and he hasn’t had to do a ton lately. This is the kind of game where he could really make a statement, but with that, it also opens up a lot for this passing game, which hasn’t been what it was, but it is still very dangerous and will capitalize if not respected.

This is going to be a hard-fought game, but on their home field, Thompson wants redemption and the defense will be ready to make a difference, while the offense will make sure to help them out.