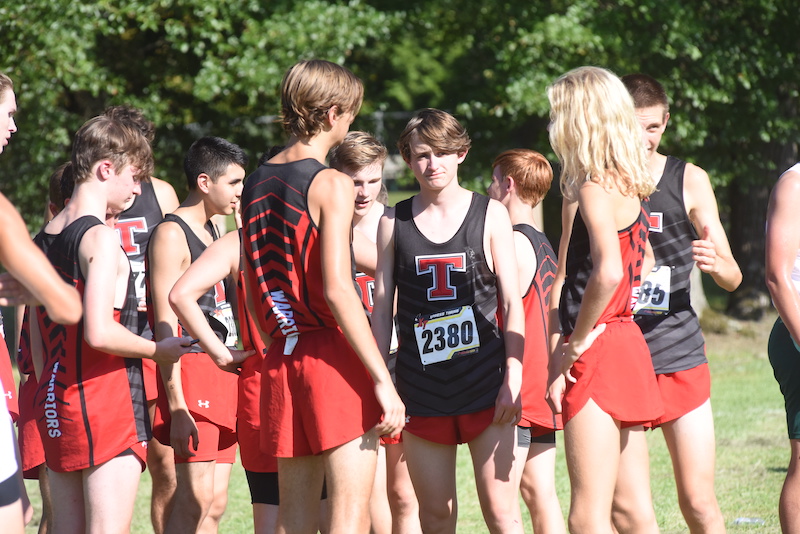 Several teams competed in the 7A state competition in Oakville on Saturday, Nov. 5. (Reporter photo/Lauren Sexton)

Helena’s boys team placed fourth overall out of the 19 schools that placed in the 5K on Saturday. Senior Caden Blackman and Aspen Warren placed within the top 20 for the Huskies. Blackman came in seventh out of the 170 runners who ran in the challenge with a time of 16:43:47. Warren came in 16th place timing at 17:22:58.

Oak Mountain finished fifth in the boys race with one runner finishing in the top 10. Sophomore John Shoemaker finished in 10th place for the Eagles with a time of 16:59:94.

Thompson’s boys team came in sixth in the race with only one runner finishing within the top 25 in the Husky Challenge. Junior Matthew Hamlin completed the race timing at 17:33:92 in 24th place.

Coming in 11th place was Briarwood’s boys team with senior Brandon Dixon finishing within the top 25 for the Lion. Placing 21st overall, Dixon timed at 17:26.08.

River Horton and Alex Fleming placed within the top 100 for Shelby County’s boys team. The Wildcats finished in 15 out of the 19 teams that placed.

Trailing behind in sixth place, Briarwood had two runners place in the top 10. Sophomore Mary Grace Parker finished in eighth place timing at 19:58:42. Junior Bela Doss placed 10th overall with a time of 20:07:58.

Helena’s girls team followed Thompson by coming in 11th overall. Ashlynn Beery placed within the top 25 for the Huskies. Beery timed at 20:56:84 and finished in 22nd place.

Catherine Hinson finished in the top 50 for Indian Springs which placed 14th in the girls race. Hinson placed 32nd overall timing at 21:22:43.

Montevallo and Cornerstone girls teams did not place overall in the event, however, Montevallo’s Meredith Adams and Cornerstone’s De’Nya Reynolds finished within the top 100.