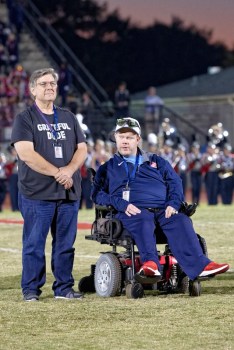 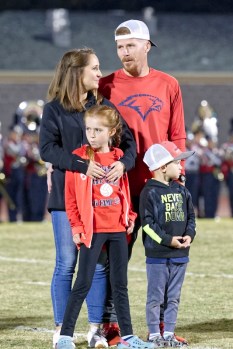 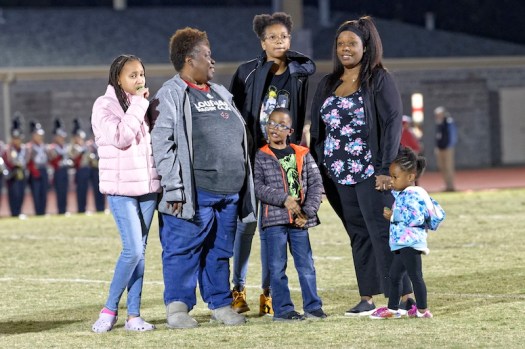 During Oak Mountain's Friday, Oct. 14 football game, the Eagles announced the 2023 inductees. (For the reporter/Barry Clemmons) 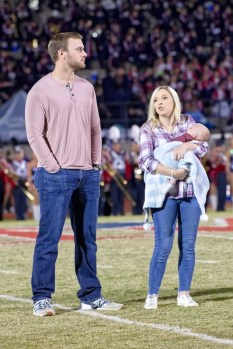 NORTH SHELBY – A player’s impact lasts longer than the four years of their attendance at their alma mater. They represent their schools in every game they play even if they represent another school’s color.

“We have a committee and anyone can nominate people, and then the committee looks at all the nominations,” Oak Mountain health teacher and head girl’s soccer coach Chris Blight said about the Hall of Fame class process. “It has to be 80 percent of the committee’s vote to get approved to be induced.”

During halftime of the Oak Mountain game against Vestavia Hills on Friday, Oct. 14 at Heardmont Park, Oak Mountain athletics announced the 2023 inductees to their Hall of Fame. The list included several students and teams who had an impact at high school while as students and after they had graduated.

“It just shows the success that we have in athletics,” Blight said. “The people that come through this place are special. They’ve done fantastic things in sports, but now in the world. They’re all doing different things. They’re making a bigger impact after Oak Mountain, and we are rewarding them with this and showing them what they mean to us and our community.

The inductees included DJ Looney from the Class of 2007. Looney was a member of the football and wrestling team during his time at Oak Mountain. He started for the Eagles for three years and was rated the No. 11 offensive center prospect in the nation by ESPN out of high school. While on the wrestling team, Looney was state runner-up in 2007. Looney graduated and continued his playing career at a collegiate level at Mississippi State and won two bowl games. He went on to coach for three seasons with the Louisiana Ragin Cajuns football program as an offensive line coach. Two members of his Louisiana offensive line had two NFL draft picks. Looney also coached at Georgia, Mississippi State, Central Arkansas and East Mississippi Community

Looney passed away in 2020 and will be inducted into the Hall of Fame posthumously. Looney was represented by his mother Sarah and his family during the game on Friday night.

Heath Quinn graduated from Oak Mountain in 2013 and was a member of the baseball team. Quinn continued his baseball career after he graduated at Samford where he accumulated 44 home runs, 48 doubles, 168 runs, 181 RBI and a stellar .334 batting average in three years. Quinn became the second-highest draft pick for Samford in the 112-year history of the program. Quinn was the 95th pick overall and was selected by the San Francisco Giants.

Matt Taylor played football, basketball, and soccer at Oak Mountain and lettered each year in all four. Taylor received state and county honors in each sport while he was an Eagle. During the fall season as a football player, Taylor has continued to hold the school record for interceptions and pass breakups. In the spring, Taylor took to the soccer field and was selected as an AHSAA All-star. Taylor continued his career as a football player at UAB. in the four years he played for the dragons, the Oak Mountain 2004 graduate concluded his senior season as the Dragons’ No. 3 tackler having made 70 stops, of which 42 were solo hits. Taylor returned to Oak Mountain as a teacher and currently coaches soccer for the Eagles. He also works with other teams within the athletic program with strength and conditioning.

Fans of Oak Mountain, Ben and Bruce Gilliland, were honored during halftime. The two have been long-time supporters of the Eagles and have spent the past 15 years cheering on Oak Mountain from the sidelines.

Merritt Mathias from the Class of 2008 played on the girls’ soccer team while she was a student at Oak Mountain. Mathias was one of the most highly sought recruits in the country and was an All-America selection in 2006 and 2007. Mathias continued her soccer career as a student-athlete at the University of North Carolina at Chapel Hill for two seasons before transferring to Texas A&M where she majored in Agriculture leadership and development.

“Hopefully this is going to be an annual thing,” Blight said. “We’re hoping that it’s going to be a huge celebration of Oak Mountain athletics. We have so many different people that have done incredible things here and are continuing to do amazing things.”

The second induction class of the Hall of Fame will be held on February 25, 2023.