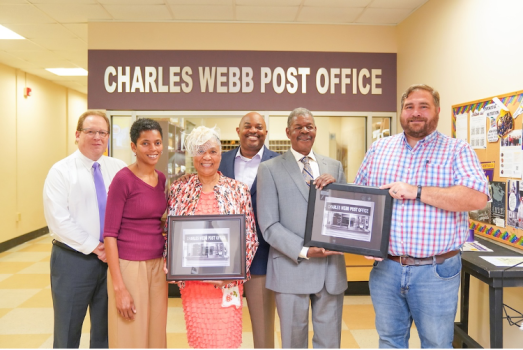 The University of Montevallo celebrated 126 years on Thursday, Oct. 13, with a morning convocation and the dedication of the Charles Webb Jr. Post Office—the second Black man in UM history to have a facility named for him—on the afternoon of Founders’ Day. (Contributed) 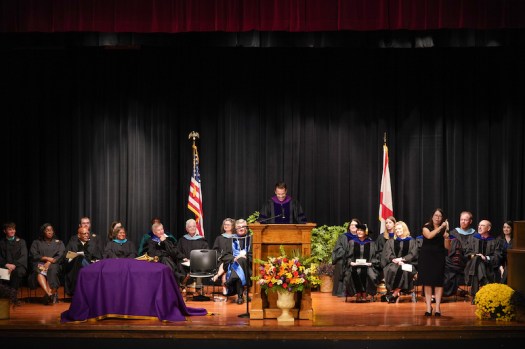 Special to the Reporter | Jamon Smith

MONTEVALLO – The University of Montevallo celebrated 126 years on Thursday, Oct. 13, with a morning convocation and the dedication of the Charles Webb Jr. Post Office—the second Black man in UM history to have a facility named for him—on the afternoon of Founders’ Day.

The theme of this year’s Founders’ Day was a “Montevallo Moment.” President John W. Stewart III said at the convocation that the theme represents how the Montevallo family is truly held together by their experiences and moments at UM, both large and small.

“A Montevallo Moment may come from personal success or recognition, or it may be the smallest act of kindness that leads to lifelong friendships on our campus,” he said.

Blake Hudson, a 2002 UM graduate who became the dean and a professor of law at Samford University’s Cumberland School of Law in July—one of two UM graduates who are currently at the helm of accredited state law schools—threaded the theme throughout his keynote address.

“I’m grateful to have an opportunity to serve as the dean of the Cumberland School of Law at Samford,” he said. “But it would not have been possible without many moments that shaped me during my time at Montevallo. I can say without a doubt that the many moments I had at Montevallo were transformative in my life.”

Hudson, who hadn’t been on the Palmer Hall Auditorium stage for Founders’ Day since he spoke as the senior class president in 2002, said his father had no running water or electricity in his house until he was 14 years old in 1962. But less than a decade later, he graduated from UM with his master’s degree.

He was able to do so because it was affordable. Hudson said that was his first Montevallo Moment.

“My parents weren’t able to pay all the cost of my attendance here, but I was able to come here and receive such a quality education because it was affordable.”

Hudson said his experience with the faculty at Montevallo was a “sustained moment” over his entire time at UM and was key to paving his way to attend the Duke University School of Law.

His advice to the current senior class, which underwent an investiture ceremony at the convocation, was to understand that the moments they spent at Montevallo would shape the rest of their lives.

“Perhaps it will in unanticipated ways,” Hudson said. “Make the most of those moments. Seize them, turn them into lasting imprints on your lives. I’m grateful that Montevallo gave me so many good moments, and now that I’m back home. I look forward to being engaged and creating many great Montevallo moments for others.”

Several faculty, staff and alumni were honored at the convocation with awards for their exemplary work and service.

Dr. Ashley Wurzbacher, an associate professor of English, was named the 2022 University Scholar for her short story collection “Happy Like This,” which has received national and global recognition.

Dr. Jermaine Mitchell, an assistant professor of exercise science who died on Feb. 20 at the age of 41, was posthumously awarded the renamed Jermaine Mitchell Faculty Service Award for his dedication to community service and his impact on the University community. His wife, Dr. Qshequilla Mitchell, accepted it on his behalf.

“He was a great friend, an incredible person, who led the way in service for the department,” said Dr. Claire Edwards, president of the Faculty Senate. “He showed heart and compassion for people and their wellness. He strived for inclusion, built relationships and was devoted to the disadvantaged and misfortunate.”

The UMNAA Outstanding Commitment to Teaching Award was conferred to Dr. Greg Samuels, associate professor of elementary and secondary education.

The three UMNAA award winners were celebrated with a reception at Anna Irvin Dining Hall later in the evening, along with the second installment of the 15 Within 15 recognizing alumni achieving greatness within 15 years of graduation.

In honor of Charles Webb Jr., a Black man from Montevallo who delivered mail to every building on campus from 1941—while he was still in high school—to 1977 when he retired, the UM post office in Farmer Hall was renamed the Charles Webb Post Office.

“During our country’s social justice movement there were discussions all over the country on college campuses about naming buildings on campus and spaces on campus,” Stewart said during the dedication ceremony outside of Farmer Hall. “I called our Board of Trustees chair, Todd Strange, and Todd and I had a very long conversation about what the University of Montevallo’s response should be to that very important moment in our nation’s history.”

Stewart said they created two committees out of that conversation. One researched the history of building names on campus and the other worked on creating new names for campus buildings. He said Charles Webb was remembered well by alums and was highly recommended.

Karen Kelly ’80, chair of the UM Foundation Board of Directors and a member of the naming committee, also spoke at the event and said the honor is well deserved and praised Webb’s determination, pleasant demeanor and perseverance to complete an incredibly difficult job.

Cynthia Todd ’88, the newest member of UM’s Board of Trustees, said Webb always had a smile on his face and was always on time.

Webb’s family thanked Stewart and the board for honoring “Uncle Charlie” and continuing to improve diversity at Montevallo.