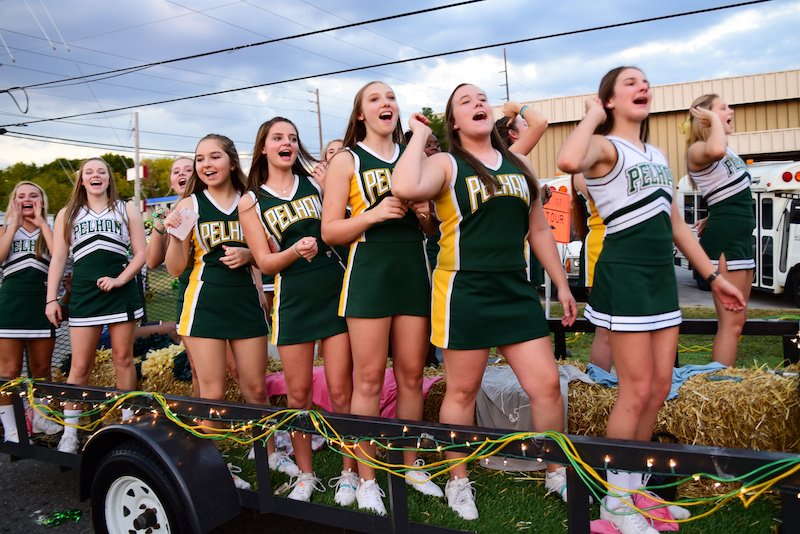 Homecoming week for Pelham City Schools is set to begin Monday, Oct. 24, and the excitement is growing. (File)

PELHAM – Pelham City Schools are preparing for the Panther Prowl homecoming parade and pep rally in celebration of its homecoming week.

The Pelham City Schools’ homecoming week kicks off Monday, Oct. 24. The homecoming parade will occur Wednesday, Oct. 26 at 5:30 p.m. and will proceed down Bearden Road.

Communications manager Nicole Knight said many are excited for the upcoming events.

“As homecoming week gets closer, we’re seeing more and more excitement throughout the schools and community,” Knight said. “The groups who are participating in the parade are making plans for the floats and gathering lots of candy to throw, and there is a buzz in the schools about dress up days and all the activities that will take place throughout the week.”

Knight said that both parents and students seem to enjoy the week.

“The smiles, chatter and squeals of excitement can be heard up and down the parade route as the floats roll down the hill,” Knight said. “I think parents enjoy the parade and pep rally as much as the students do.”

Knight said there is a lot of appreciation for the parents and adults that pour so much time and energy into homecoming week.

“We’re grateful to all the parents, coaches and teachers who commit their time and energy to creating and chaperoning floats and to the parents and community members who take the time to attend the parade and pep rally,” Knight said. “The community participation and enthusiasm makes it fun for everyone year after year.”

Knight said that the Panther Prowl homecoming parade is an event beloved by students and people of all ages and backgrounds.

“The Panther Prowl is fun for all ages and everyone in our community,” Knight said. “Whether you’re on a float in the parade or a spectator along Bearden Road, it’s a fun atmosphere for everyone. This year, the parade will feature the youth football and cheer teams from Pelham Parks & Recreation, the Pelham High School homecoming court and groups from several Pelham High School and Pelham Park Middle School sports teams and clubs. Plus, we are so grateful for the support for the Pelham police and fire departments who coordinate traffic control and ensure safety along the parade route.”

Knight said lots of fun can be expected at the pep rally.

“We’ll have the traditional elements of a pep rally featuring the high school football team along with music, dance and cheer performances,” Knight said. “Then we’ll bring out teams of students and teachers from each of the schools to compete in the Panther Powerhouse Challenge which is a lot of fun whether you are participating or watching.”

More information about homecoming week activities can be found at Pelhamcityschools.org.