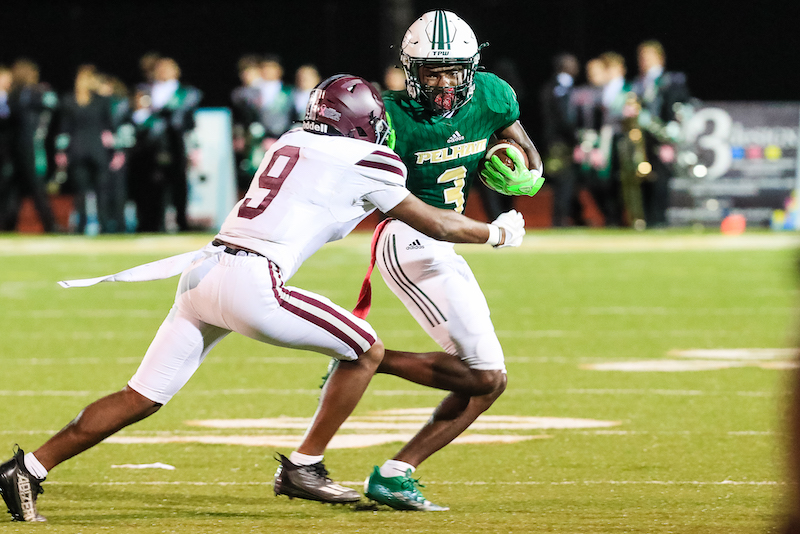 The final week of the regular season is here, and for many, that means the final time they’ll step on the field.

It’s always a sad realization, but one that offers a final chance to leave a mark, and that should be the case this week before the playoffs begin a week later.

An unusual week, there will be six games featuring our local AHSAA teams and four of them will be on Thursday night, creating for a quiet Friday night.

Pelham vs. Spain Park (Thursday, Game of the Week)

We have one last county battle to end the regular season, and it features two teams looking for different things. Pelham is headed to the playoffs as a two seed and has homefield advantage after last week’s win against Chilton County and Benjamin Russell’s win against Helena. Spain Park, on the other hand, is coming off a 9-3 loss to Oak Mountain in a battle of two-win teams. The offensive struggle has been the storyline for the Jags, who are scoring 15.8 points per game, while Pelham has improved on that side of the ball since the start of the season at 23.3 points per game. Both have strong defenses that should make this one lower scoring, but you also have the factor of Pelham wanting to be fresh for the playoffs and Spain Park looking to finish on a high note. The Jags may want and need this one more, but they’ll have to dig deep for some offense to find it. Pelham 21, Spain Park 14

There is no other way to describe it, the last two weeks have been brutal for the Helena Huskies. A 52-51 4OT loss to Calera and a 47-14 loss to Benjamin Russell ultimately kept the Huskies from reaching the playoffs, and they know they are better than how they finished. Now, it becomes about pride. How bad does this year’s senior class, and even the ones under them, want to finish the season on a high note. It doesn’t even have to be a win this week, but just showing fight against a good Vestavia team can be telling for the team’s mentality ahead of the offseason. The Rebels are 5-4 with wins in four of the last five and a tight 45-37 loss to Hewitt-Trussville in that span. But, it’s a team that doesn’t need this game. Ultimately, Helena has enough talent and is physical enough to capitalize on that and make this one close, but there is a lot to overcome to win a game like this, especially with the defense giving up 52 and 47 the last two weeks. Helena 14, Vestavia Hills 31

Calera is now headed to the playoffs after the chaos in Class 6A, Region 3 last week, but the Eagles certainly don’t want to limp into the postseason with two straight losses after falling to Gadsden City 24-20 a week ago. That said, this game against McAdory serves as a great game-prep opportunity for Hillcrest-Tuscaloosa the week after, while McAdory plays Homewood. Both can get a good feel for their chances in the first round through this matchup, and I think both keep that in mind. Sure, they want to win this one, but being healthy and prepared for the first round and a new season a week later may be just as important. McAdory is scoring 30.8 points per game and giving up 17.2, while Calera is scoring 24.3 and giving up 26.6. Both teams have battled difficult schedules and tight games, which should create for another thrilling battle here. McAdory 28, Calera 24

On a four-game losing streak, it won’t get any easier in the final game of the season for the Briarwood Lions as they host 7-2 Fairhope. But, similar to other games, this is the season for the Lions, while Fairhope will have a big first-round playoff matchup to prepare for a week later. Now 3-6 on the season, Briarwood has been in just about every game, losing four by 10 points or less going into this matchup. Fairhope started the season 5-0 and is 2-2 in the last two games, but the offense has played well at 35.4 points per game. Briarwood has gone the wrong direction on that side of the ball, scoring 28 or less in the last four, 21 or less in three of the last four and 14 or less the last two weeks. The Lions will keep this a game, but the offense’s ability to do a 180 this week will be important. Briarwood 21, Fairhope 31

It has been tough sledding for the Shelby County Wildcats after their 3-1 start to the season. Now at 3-6 on the season, a big reason why is the struggle offensively. That side of the ball has scored 23 or less in every game and 14 or less in five straight for an average of 11.4 points per game. Now, they get a Woodlawn team that is improved this season compared to the past years at 5-4 and coming off a 22-18 win against Minor. The Colonels are also struggling to score points, however, at 15.7 per game, which should make this a lower-scoring game. That said, they have a classification advantage and their defense is giving up four points less per game. Woodlawn 20, Shelby County 14

Montevallo gave a valiant effort last week in a 24-7 loss to region winner American Christian. A win in that game would have given the Bulldogs a playoff spot, and the defense did its part once again. The offense, however, was held to seven or less for the fourth time this season, while they’ve scored 14 or less in all but three games. That said, they now have a chance to finish the season on a high note, and they should be able to do just that. Tarrant, a Class 3A team, is 2-7 and scoring 11.3 points per game while giving up 34.3 points per game. Montevallo’s defense has the potential to post a shutout this week, while the offense could have one of its best weeks of the season. Montevallo 34, Tarrant 6

Cornerstone has been tough to figure out at times the last few weeks with an up-and-down stretch, and the Chargers now enter this game against Bessemer Academy off a 42-30 loss to Evangel Montgomery. Cornerstone’s offense took a step backward in the loss and will need to bounce back this week against Bessemer, who is 1-8 on the season. However, Bessemer Academy is normally an 11-man team compared to Cornerstone as an 8-man team. That said, the Chargers are playing 32 points per game better offensively and are giving up around the same number at 33 points per game. The Chargers need this bounce back win as the postseason nears. Cornerstone 43, Bessemer Academy 33

Now 1-8 off a 34-0 shutout to Southern Academy last week, Coosa Valley has officially been held to 14 or less in every game this season with one last chance to change that this week against Sparta. Sparta is giving up 43.6 points per game, and that is something the Rebels absolutely have to capitalize on. Sparta is struggling on offense as well at 15.8 points per game, but they’ve scored 28 or more in three games against similar opponents. This week, Coosa Valley should be able to score their most points of the season, but will that be enough? That’s something that will have to be proven. Coosa Valley 20, Sparta 27