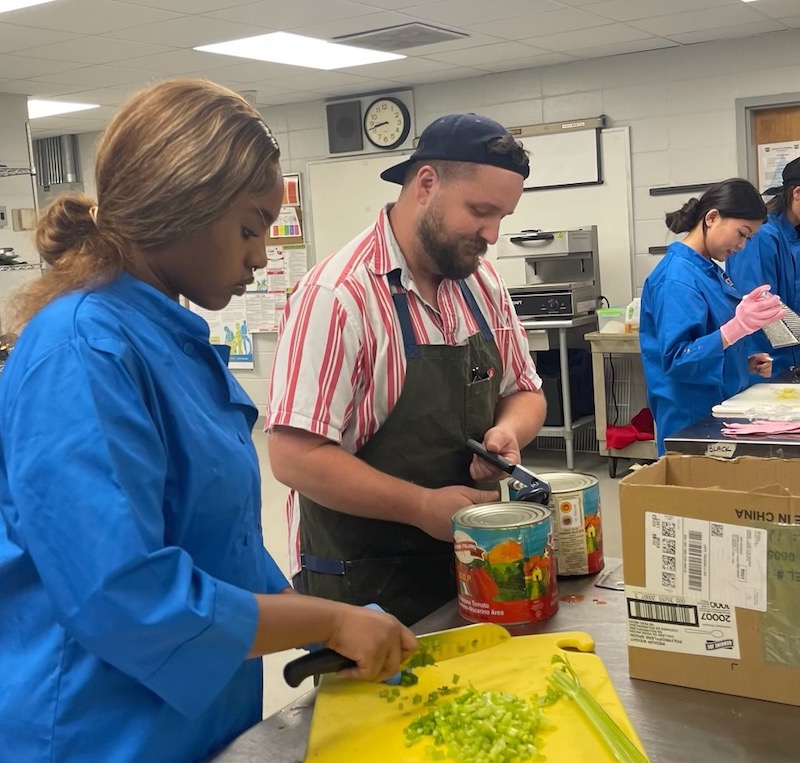 COLUMBIANA – Local celebrity chef Jonathan Harrison, past contestant on Next Level Chef, worked as the chef at Columbiana Main Street’s second annual Farm to Table Dinner on Saturday, Oct. 22, and was able to mentor culinary students at CTEC as part of his partnership with the Main Street organization.

The sold-out dinner was a five-course meal that was created from donations from several local businesses as well as area farms including R & S, C & J, Durbin, Alleluia Farms and the Cattlemen’s Association. The menu for the dinner included drinks donated by Siluria Brewing Company, Lewis Lakes Vineyards and Just a Tish. The five courses included several appetizers, an autumn salad, gumbo, fennel spiced chicken with cabbage, rainbow carrots and roasted grapes, as well as white chocolate bread pudding for dessert.

With such a large menu and so many mouths to feed, Harrison was able to get help prepping for this huge undertaking by working with Brandi Tyrrell Eades’ CTEC culinary students.

“The students helped Jon prep the 50 pounds of onions, 25 pounds of celery, as well as make the gumbo and the ragù he created to be poured over individual cups of grits,” Eades said.

Eades said the students were excited to work with Harrison.

“Hearing him reiterate what they’ve been hearing in our class had a huge impact on most of them,” Eades said.

Eades said Harrison spent time working with and mentoring as many of them as he was able to. He also gave them tips on how to use social media to promote themselves and how to properly photograph their work. Some of the students even helped the evening of the fundraiser, by volunteering their time to serve at the dinner.

The funds raised by the dinner will help the Columbiana Main Street program reach its goals of working with local businesses to bring jobs, economic vitality and community to the historic downtown district of Columbiana. This gave the students not only a chance to work with a celebrity, but also get a vision of how their chosen work can impact the communities they work in.

Eades said that much of what Harrison shared with her students drove home the lessons she’s already been teaching this year.

“I also think it’s cool that he pays such a tribute to his roots every time he has an opportunity, and that he makes a special point to work with students from the same area that he himself graduated from,” she said.

To learn more about CTEC and how it prepares students to enter the workforce, visit its Facebook page. CTEC offers training for technical careers in over ten areas. Find chef Jonathan Harrison on Instagram at @chef_jonathanharrison.