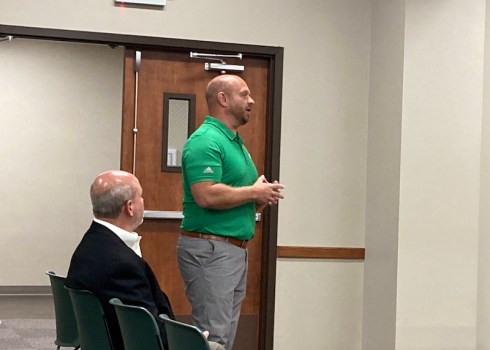 The Shelby County Commission heard from representatives of Waste Management on the recent issues of trash pickup during a scheduled meeting on Monday, Oct. 24. (Reporter photo/Noah Wortham) 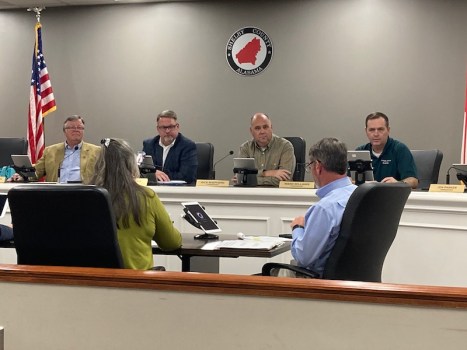 COLUMBIANA – The Shelby County Commission heard from representatives of Waste Management on the recent issues of trash pickup and approved an agreement to maintain a roadway that is within the limits of the Town of Indian Spring Village during a scheduled meeting on Monday, Oct. 24.

Two representatives of Waste Management addressed the council during the meeting regarding the issues they faced in trash pickup.

“I’m excited to be down here,” WM representative Johannes Kohn said. “We’re excited to have this contract. We know it didn’t kick off the way we had intended to… but now we’re back on track. We’ve increased our routes from seven routes to 11 routes.”

He explained some reason for their difficulty is due to GPS.

“The GPS just hasn’t worked the way we had anticipated it when we put it into the system to route everything,” Kohn said. “We’re pulling everybody we can and all the resources and so we’re making improvements week after week, but we’ll get there. I’m sure that (in the) next couple weeks we’ll be having a much different conversation.”

An additional issue the company is facing is related to workers who lack experience.

“It is challenging, I’m not going to lie,” Kohn said. “It’s getting through the hiring process, the training process. Once we bring somebody on board it’s a minimum of eight weeks before they can get into a truck by themselves.”

County Manager Chad Scroggins shared his thoughts on the issue and supported what Kohn had to say.

“They’re learning new routes at the same time,” Scroggins said. “Which then creates some of the missed services.”

He made additional remarks on the issues involving trash pickup.

“If there has been somebody who has not been picked up in three weeks we just need to know about it,” Scroggins said.

The Shelby County Commission also approved an agreement to maintain a roadway that is within the limits of the Town of Indian Spring Village.

There was an initial issue since a portion of the described area was in both unincorporated Shelby County and Indian Springs Village.